Messed Up and Crazy: The Sad Tale of Justin Levens (Part 2) 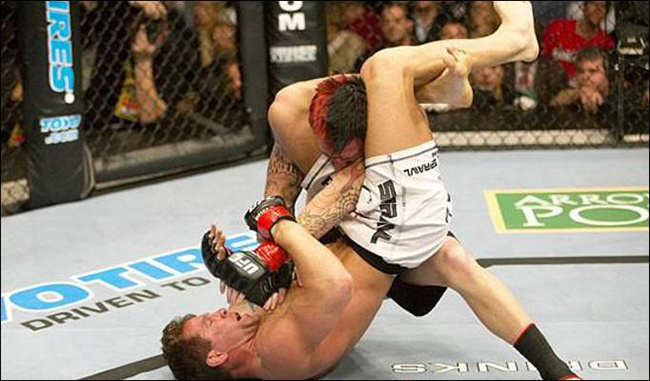 Okay, so what? So he got beat by a former champion? He still had his UFC contract. And since the powers-that-be had fucked him on the match-up with Tanner—short notice against a former champion—maybe they'd cut him some slack on the next guy.

And they did. Jorge Santiago. Santiago was 11-5 and had some time in the cage, but he'd never fought in the UFC. He was a Brazilian submission guy. Levens was more of a banger, but training under Ruas, also Brazilian, he was well-versed in the likes of Santiago. The match-up wasn't a joke, but it was winnable. Still, Levens lost. He'd head back to the minors. Santiago would go on to five more fights in the UFC and lose every time.

Four months after the Santiago fight, Levens picked off Justin Hawes, a WEC light heavyweight. A month later, he beat Brian Warren, also by strikes, and also at 205. He was winning again, despite the potato chips.

Another opportunity. The International Fight League and network television. The IFL concept: teams of fighters. Marcos Ruas, for example, would captain the Condors, who would fight, for example, Maurice Smith's Tiger Sharks. Levens was on the card. His opponent, Reese Andy, had four wins and a loss—a powerhouse, but without Levens' ring time. It was a fight that Levens should have had the depth to win. But good God, it went the distance, and Levens had never been past the first round. Decision to Andy.

Right, no more Brittney--focus, focus. The next IFL match-up: 205, against future UFC fighter Vladimir "The Janitor" Matyushenko. Matyushenko had 16 wins and three losses. Okay, so this was a tough, tough guy. But he was 38 and so awkward that Levens, who once called himself a "spaz" in a prefight interview, had a huge advantage in athleticism. But he was overpowered from the opening bell. Matyushenko bullied Levens into turtle position and hammered him 'till it was over.

Maybe it was the weight thing after all. Levens dieted, got down to185. He fought Brian Foster, who'd won eight and lost 11. Those were numbers Levens could work with. He got into a rhythm with his training, and his lazy physique went away. For the first time ever, Levens was actually in shape, and Sara McLean, who was part of the picture now, helped keep him off "the crappy food" that he pined for in interviews.

But Foster outwrestled Levens, punched him some, and got the TKO finish at 1:17.

Three strikes and Levens was out of the IFL. But the WEC still wanted him and he booked a fight with a new outfit, Beatdown in Bakersfield (the BIB would be a one-off organization). He'd be fighting two more up-and-coming guys. Nate James and Kenny Ento. Levens went the distance in the first fight, and James got the benefit of the unanimous decision. Kenny Ento choked Levens out. Two more losses in unspectacular fashion.

Five years before, Levens had trained with a guy named Tom Atencio. That training bond is like blood, and Atencio, the majority shareholder of Affliction Clothing, hooked up Levens with a fight in the first Affliction MMA event, "Affliction: Banned." Levens was to face Patrick Speight, who had a 3-1 record, was coming off a loss, and was a 170-pound fighter fighting in a heavier weight class. You could say that Levens was the overwhelming favorite, or that Speight was the underdog, or that the pairing was a mismatch.

Levens trained, he kicked the bag, but he moved like a fat kid, like he was saving himself for something else. Could've have been that his training partners didn't challenge him enough. Could've been that his shoulder, which had bothered him since the Oliveira slam, was sapping his enthusiasm. Could've been that he was already overdoing the painkillers, the oxymorphone, to keep himself showing up at the club. Could've been that he knew his fighting days were all but over—he was 28 and a lot of guys are blown apart at 28—and he was just gonna collect whatever paychecks he could, then resort to option B, whatever that was. He was not going to get rich, he was not going to support a family, he was not even going to pay his own bills as a fighter. His UFC contract, his dream come true, had grossed him $10,000. That was for two fights.

Due to time constraints (or maybe a merciful decree from Atencio, Levens' old pal) Levens/Speight was cut from the card. Levens got his purse but had to give some of it to his opponent. For the oxymorphone, the State of California slapped Levens with a $1000 fine and a six-month ban.

Joe Riggs, a one-time UFC contender who also developed a dependence on painkillers, said, "The thing about fighters, you are taking [painkillers] to get through the day." The thing about oxymorphone: it's 10 times more powerful than morphine.

In August, Justin took Sara to Colorado. His brother Tim was getting married, and he was best man. Friends would later say that Justin and Sara were having problems, but the family didn't notice. Sara seemed shy, especially when compared to Brittney. But she may have been reserved because Justin was a drug addict, or she was a drug addict, or both of them were drug addicts.

To Tim, Justin didn't seem depressed, even if he was a little "bummed" by his five-fight losing streak. "Obviously he was having a hard time with fights," Tim would recall, "He had been training pretty hard. I think he was trying to look into maybe different martial arts. … He was also talking about becoming an X-ray technician or railroad worker, so he had the backup plan in case. He's a very smart person. He'd sit down and think things through."

The "backup plan" was to move to Colorado before Christmas. Get a fresh start and find a new gym. Justin was "always laughing," Tim would say, but Tim and his mother were troubled: Justin told the family he was having blackouts.

Oh, and there was that annoyance about the pending assault charges, but Justin was only concerned in a remote "what if" scenario. Justin said that he was in Big Bear training for a fight when this Matthew David guy claimed the assault took place. Total frame-up. Justin had never been in legal trouble like this—except for that domestic violence thing in 2003, but that was ages ago.

That September, 2008, Evan Tanner took a motorcycle into the desert on a vision quest. He died of thirst. He'd lost four of his last five fights. Justin Levens had been his final victory. Back in 2006, when he'd lifted his hands to acknowledge the win, there was no sign that beating this weird-haired kid was anything more than a former champion recalibrating. And when Levens hugged Tanner in congratulations, there was no sign that this was anything more than a minor setback for a young fighter with a bright future. There was no sign that this fight would go down in the books as the most hexed contest in the history of MMA. Two guys, both of whom would be dead within 20 months. Two guys. Fucked-up and crazy. And both of them both.

A few times that November, the Orange County police heard the address: 151 Fleurance, Laguna Niguel. Once they showed up to investigate smoke coming out of the apartment, and once they showed up to look into a reported drug overdose. Even after everyone was dead, they couldn't remember who was high, Justin or Sara or Justin and Sara. Prescription drug addicts in Orange County are like termites: There are too many to count, they all look the same, and once you know where they are you try not to look too closely.

Wednesday, December 17. Justin and Sara were supposed to be in court that afternoon. Sara's mom hadn't heard from her daughter in a few days, so she headed over to the couple's condo. She found the bodies. Sara had been shot in the heart, and Justin had shot himself in the head. The gun was by his hand. They'd been dead for four or five days. There was no suicide note, but the place was full of painkillers and anti-depressants. Prescription drugs, but no prescriptions. The press reported the deaths as a possible suicide/murder, or a possible double suicide. The police ruled it suicide/murder.