Michael Bisping, Healthy Enough to Fight GSP, Is Too Injured to Fight Jacare 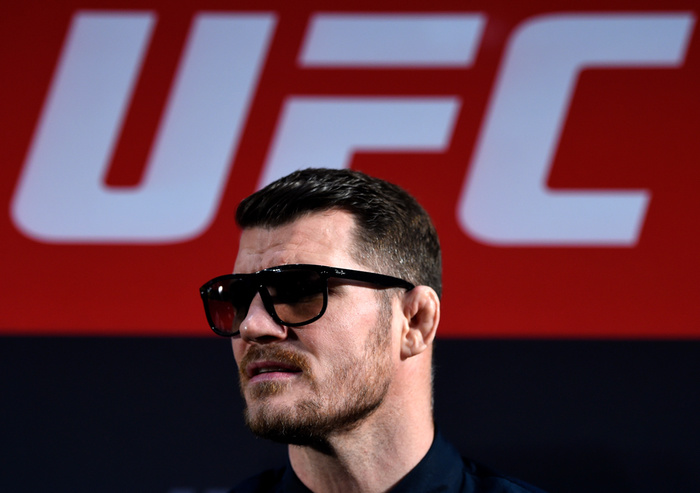 Michael Bisping is too hurt to defend his middleweight belt against Ronaldo "Jacare" Souza any time soon. That's obvious in hindsight, when you think about the battered face he wore after taking a five-round unanimous decision over Dan Henderson last month. The only reason it's news is because of everything Michael Bisping said to suggest he was just fine.

Let's recap the cross-divisional series of events. Soon after Bisping beat Henderson, a contract dispute scuttled former welterweight champion Georges St-Pierre's presumed return at UFC 206 and left a gaping hole in the Toronto card. Bisping saw dollar signs and implored St-Pierre to fight him on the December event, to which St-Pierre declined. Meantime, Jacare was booked for a fight against Luke Rockhold at the end of November. With fellow 185-pounders Chris Weidman and Yoel Romero tied up at UFC 205, Bisping lobbied for a fight with the now-unsuspended sometime-middleweight-but-usually-welterweight Nick Diaz at UFC 206. "All the other top middleweights, they have fights booked right now, so they're busy, so who else is there?" Bisping told TMZ. "…if Diaz is free and he wants to fight at UFC 206, let's do it…I'll take Nick out pretty easy."

But on Tuesday, Rockhold withdrew from his fight with Jacare because of a sprained ACL, and the door opened for the sort of fight that risks endangerment in the money-over-everything era: a champion versus a challenger who got there on the strength of wins alone. Jacare is a scary, superlative middleweight whose one-fight win streak elides the eight straight victories that preceded a close split-decision loss to Romero. That Jacare hasn’t yet had a title shot is partly a result of bad timing: if he hadn't tweaked his knee around the time he smashed Vitor Belfort last May, he would have been gifted the title shot that went to Bisping.

Then yesterday on UFC Tonight, Bisping pulled the plug on a quick turnaround against Jacare—or anyone else—because of injuries he incurred during the Henderson fight. "I've got a busted orbital, I'm getting injections on my knee," he said. Then he addressed his own contradiction. "Now I know what everyone at home is going to say: 'Didn't you call out GSP a couple weeks ago?'" Bisping said. "Yes, I did, but really, think about this: that was a massive payday, roughly $3 to 4 million I would have earned from that fight. Against Jacare, I'm going to get around about a quarter."

Credit for the insight into Bisping's internal risk-reward calculus: he names the price tag on working around significant injuries in training and the trouble he's willing to go through to get doctors to give him a clean bill of health. And hey, if he lost to either GSP or Diaz, he had a built-in reason: didn’t you see his face after the Henderson fight? Guys don't turn around that fast from that kind of damage.

But given everything else Michael Bisping has said and done, this looks so bad. Your first title defense was against a 46-year-old with a one-fight win streak, you followed up by goading a pair of less-than-active welterweights—one who hasn't fought in three years, one who hasn’t won a fight in half a decade—while giving no hint that you weren't ready to fight in a few weeks, but the injuries became too severe once a top challenger in your weight class freed up? Didn't you say you were eyeing Nick Diaz for UFC 206 because all the other middleweights were busy? Wasn't Jacare "one of the fucking assholes in the rest of the division" on your post-fight hit list you mentioned after beating Henderson?

This isn't about the laughable idea of Bisping, a goddamn professional fighter, being too afraid to fight other professional fighters. (For what it's worth, he told MMA Fighting that he plans to fight either Jacare or the winner of Weidman-Romero next.) It's not that Bisping doesn’t deserve a bigger paycheck after a decade of spilling his own blood, or that there isn't room for an exercise in fun and profit like a fight with GSP. It's about what a champion owes everyone else. It's not much, and it's very simple: if you aren't healthy enough to fight the best, heal until you are, and maybe be careful what you say in the meantime.

Michael Bisping and the Virtues of the Long Game

Bisping vs. Henderson II: One Overhand Short of the Crown