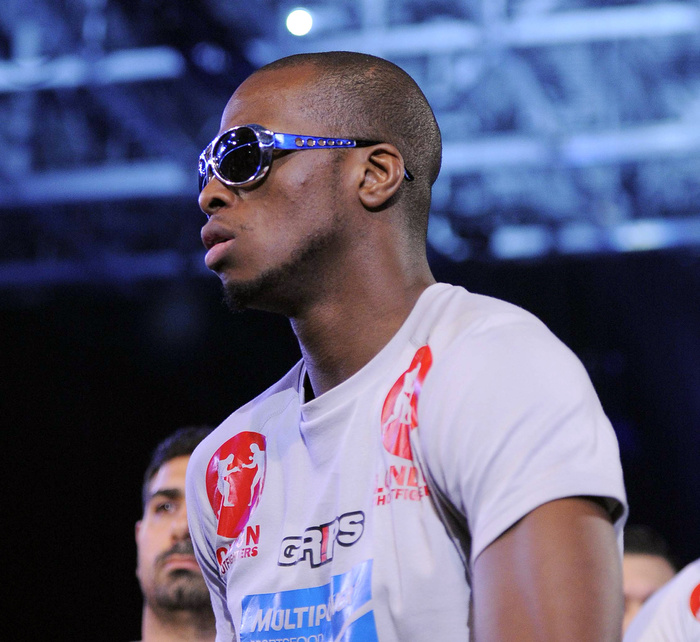 There has been plenty of talk in the media this week about Bellator's bad matchmaking at its London card and the obvious mismatches it is handing to Michael 'Venom' Page. It's hard to blame Page but the truth is that we can’t learn anything useful about Page while he beats up guys who do not have much idea of how the striking game works or who gas out on their first takedown attempt. It is dangerous to keep playing up the striking chops of one fighter when it was in equal parts their own skill and the inability of his or her opponent which made the striking look slick. Ronda Rousey's world class boxing is a terrific example of that. But the notion that Page hasn't fought anyone good is only true in mixed martial arts. In his combat sports career as a whole Page has competed against some good names, including one fighter who you should know is very, very good: Raymond Daniels.

Raymond Daniels has quickly become a fan favorite in kickboxing after making the move over from point fighting and Chuck Norris' World Combat League. In the WCL, he even had a TKO over Stephen Thompson before the result was ruled a No Contest due to injury because Chuck Norris is generous like that. Under kickboxing rules in GLORY, Daniels found himself quickly thrown in with the best and suffered defeats to Bazooka Joe and Nieky Holzken, the two top fighters in the division. However, Daniels grew from those fights and in his rematch with Holzken he got the better of him for two rounds before a cut above his eye caused a stoppage. Daniels' style is counter kicking, particularly with the back kick, and I would highly recommend you watch my video on his growth as a kickboxer. Not only does it illustrate his style and the adjustments he made in his second fight with Holzken, it also has Run DMC in the background. What's not to like?

At the Irish Open, a point fighting tournament, Daniels and Page met in the finals of the -84kg division in 2008, 2009 and 2011 and their bouts are readily available on YouTube. And to answer your immediate question: yes, there is a dance off.

First a bit about point fighting. If you go in expecting a fight you are probably going to hate it. Point fighting is playing tag from a fighting stance, and the points are entirely subjective and depend on what the judges see. You could try introducing electronic scoring and vests but that tends to remove all resemblance to an actual fight. There are lots of different kinds of point fighting with their own rules, for instance most karate styles allow foot sweeps and the WKF allow throws and limited clinch work. Rafael Aghayev gets in with the same 1-2 every time on much taller men, then gets into what I like to call the Jack Johnson clinch with his forearms and hands over his opponent's upper arms in biceps ties. From there he can throw with a hip throw or a Sasae-tsurikomi-ashi or push them away and kick.

The problem with any form of point fighting is that nothing strikes end up getting scored the same as legitimate ones. For instance Alexander Biamanti got himself a great many points connecting at the absolute end of his reach with a fake round kick to hook kick. A cool set up and a 'strike' through a real opening, but even if he had kicked as hard as he could he wouldn't have hurt anyone with some of the point scorers he connected with his tippy toes.

And then there are the occasions of all out hilarious bollocks such as Ko Matsuhisa's scorpion kick. Keep getting thrown on your head? Spaz out and hope you get the point, then market an entire DVD around that one technique you scored with once.

Though it is worth noting that Erick Silva connected an actual one of these when an opponent was clinging onto a single leg and that was pretty cool.

And it was these nothing strikes into legitimate openings which told the story of the 2008 match between Daniels and Page. The opening was under Page's lead arm, which he always hangs low until his opponent enters his range or he wants to strike with it. Against men who can't cover the distance or cut an angle, as with all of Page's MMA opponents, Page has great success with his backhanded jab from a hands low position. In the 2008 Daniels vs Page bout, Daniels was repeatedly able to sneak in a nothing body jab which left him in position to be hit but it didn't seem to matter because he'd already scored.

Daniels also struck at this opening under Page's active lead arm with his lead leg side kick—a much more legitimate strike and one which Daniels actually hurts people with in kickboxing.

Page began the bout in an orthodox stance but after Daniels had attacked the body underneath his lead hand a few times, Page switched to a southpaw stance. But again by drawing Page's lead hand into an attack or counter Daniels was able to fire underneath it. This time instead of with the nothing jab he connected a left straight to the body while covering his head from the backfist.

Notice how tightly Page is clamping his lead arm to his body by the mid point of the bout.

The 2008 bout is interesting because it shows such a cautious Daniels and Page. Daniels' back kicks are nowhere to be seen outside of feints and the two fake each other out constantly.

There was even an appearance from Daniels' retreating lead leg back kick.

In the 2009 Irish Open, Page came out orthodox again and this time seemed intent on giving ground. When Daniels charged Page tried to connect with his right hand as he backed up. The trick Stephen Thompson used to hurt Johny Hendricks again and again.

In the 2008 match Page knew that Daniels could cover the distance fast and his lead hand came up each time Daniels lunged in, but Daniels ultimately did nothing but attack the body underneath this arm. This time he kept his lead by his side and focused on giving ground and countering, something which could work whether Daniels lunged for the body or the head.

Page fought a more mobile fight too, giving ground and angling off the line of engagement. While Daniels still wasn't back kicking, Page attempted Daniels' favorite two touch side kick – back kick counter.

When Page anticipated the side kick he tried to break the line in hopes of either avoiding it and coming in from a new angle or threading the right hand down the pipe. Because of the side on stance of this style of point fighting, round kicks chamber in the same position meaning that you can in effect side step a lead round kick too if you have your timing down.

Once a fighter is behind his opponent's leg on kicks chambered at the side he is pretty much safe and can leave his right hand behind for the kicker. Just as T.J. Dillashaw did to the low line side kick that had been bothering him from Rafael Assuncao (a great fight that I regret not writing about).

Even a point fighter as experienced as Daniels was convinced to step in and chase Page, and at one point Page very nearly scored a head kick as Daniels advanced.

The 2011 bout between Page and Daniels (the last one available on YouTube at least, I have no idea these men have met in total) shows Page continue this giving ground and countering tactic while Daniels switches between lunges at the head and body.

This fight was probably the least entertaining between the two because it turned into almost a pure boxing match over massive distances. So there's a lot of lunging, a lot of jumping back, and a lot of desperately trying to get back in after an attack falls short.

Though in the final moments Page, who was losing the match, did a nice bit of ring cutting with his round kicks. But that's fighting, not so much point fighting.

Point fighting has a whole heap of shortcomings. It makes its competitors lunge wildly across the mats just to touch their opponent and leaves them in no position to follow up or recover were it an actual fight. Point fighting considers the first touch and nothing else beyond that. But point fighting does serve as an incredibly valuable training method. The ability to close and create distance quickly is an enormous advantage in a professional fight because distance kills every technique. The man who controls distance controls the fight, no matter how goofy his punching form or how high his chin. And when top notch point fighters meet opponents who don't know how to close the distance or create distance half as effectively as they do, they have a field day.

The three bouts tell you something about Michael Page that his MMA bouts have not. Firstly, he can handle a loss and can actually come back looking better because of it. Just as Stephen Thompson and Raymond Daniels had to in MMA and kickboxing respectively. This is one of the reasons I would rather Bellator just throw Page in at the deep end now before he ends up at thirty without having shown us what he had in his athletic prime. Secondly, Page can adapt to an opponent based on what happened in their first match or the film of it. His 2009 bout against Daniels was entirely different to his 2008 one and was a much tougher contest for Daniels as Page took away all the things Daniels had sussed out about him in the 2008 meeting.

The most important lesson from watching those videos though is that this meant a huge deal to Page and Daniels. After the 2011 bout Daniels erupted with emotion that you wouldn't quite believe for what was 'just' a point fighting tournament. The rivalry had its playful moments such as the dance off but in their 2011 bout the two were getting in each others faces after points and it looked like it might come to actual blows. The fact that Page and Daniels cared so much and fought so hard when they were getting paid next to nothing to compete in a fringe sport makes me so happy for the paydays they are banking in professional combat sports now. Whether you think they are hype jobs or protected, you cannot argue that they do not love the martial arts and give it their all whether its a couple of dozen other point fighters watching them in a sports center or a world wide televised event.

How Bellator London Taught Me That I Don't Care About Knockouts