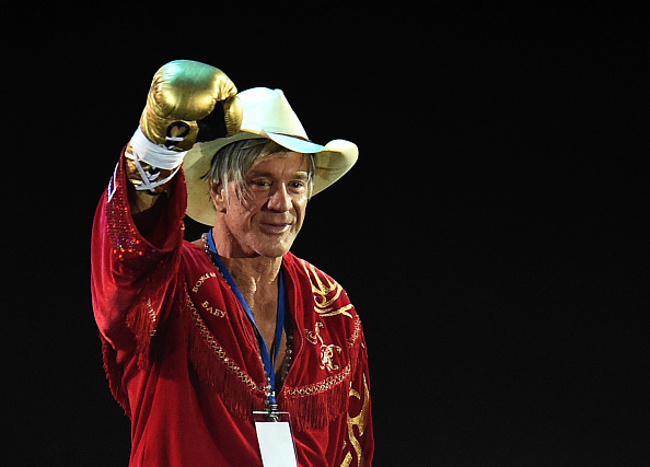 As promised, 62 year old actor Mickey “Marielito” Rourke competed in an exhibition boxing match at a concert hall in Moscow yesterday and it was, by at least some accounts, a success.

He won, knocking out his noticeably smaller 29-year-old opponent, Elliot Seymour, in the second of five scheduled rounds, and dropping Seymour’s pro-record to an unfortunate 1 victory and 10 losses. Despite our concerns that Mickey might die, his surprisingly ripped sixty-something body and his brain—which endured a number of concussions during his amateur boxing years—came out of the match completely unscathed.

His reputation came out of the match, well... let’s take a look at the tape. I’ve added some analysis of the second round below, which is every bit as professional, serious, and a credit to the sport of boxing as the fight itself.

1:54 Blending the pro-wrestling training he did for The Wrestler and his boxing background, Rourke delivers a striking new hybrid of a jab and the Irish whip.

1:47-1:41 Rourke backs up and enjoys a restorative repose against the ropes. As boxers are wont to do.

1:35 Emboldened and strengthened by this pause, Rourke springs back into action with a devastating blow to Seymour’s ribs.

1:29 Rourke walks around the ring, in obvious cognizance of where he is in the world and what he’s doing.

1:25 A Russian ref with a completely serious face starts counts in a most official and involved-looking manner. 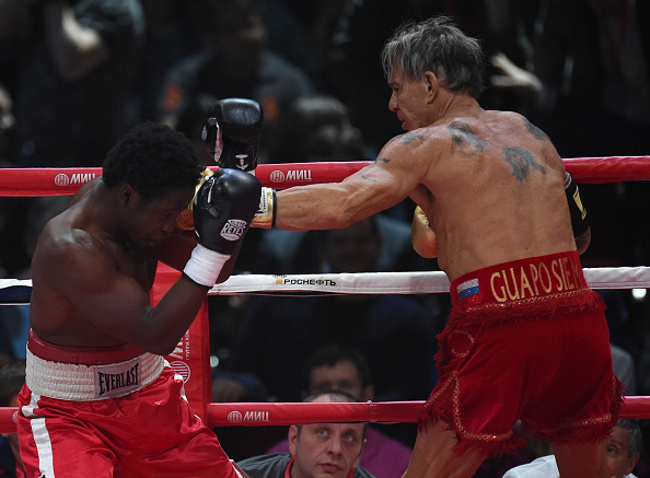 1:21 Seymour bravely rallies back and stands up.

1:15 It’s off again, thanks to another calamitous body blow from Rourke.

Rourke celebrates his victory by being aware of himself and his surroundings. 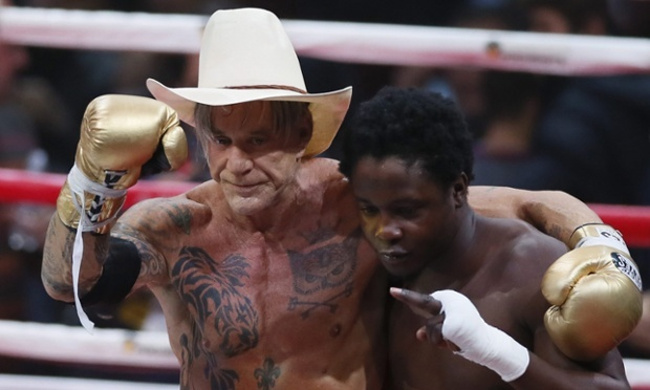 On a positive note, there are far worse things that a star with a history of personal demons could do with his time than train for and participate in something of this nature, and the experience seems to have done Rourke some good.

“I’ve got some things going on in my life so that [boxing has] sort of saved me from myself,” the actor told Russian TV, as reported by the AP. “And for a man like me, it’s better to live in fear than go on in shame.”

Rourke went on to say that he plans to do four more fights in Russia. He’s really going to get his money’s worth out of that Putin t-shirt.