Miesha Tate Gets Knocked Down, But She Gets Up Again 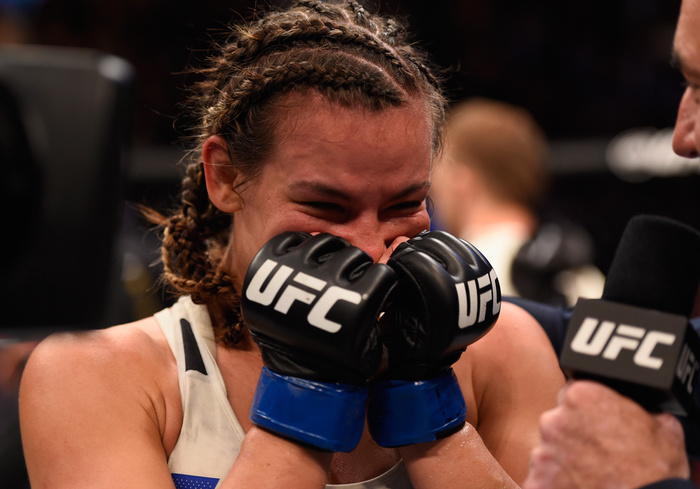 Four months ago, Miesha Tate hosted a viewing party for UFC 193 at a Las Vegas institution called Sapphire. Now, Sapphire isn’t just a gentleman’s club—they also air a number of UFC PPV events and occasionally invite fighters like Tate and Julianna Pena to host events at their sub-X-rated dayclub—but the optics weren’t great and soon inspired headlines like “Miesha Tate will be watching her title shot at UFC 193 from a Las Vegas strip club” (MMA Mania) and “Miesha Tate will spend fight night at a gentleman’s club as Dana White keeps making empty promises” (Yahoo). Tate, the onetime ruler of Strikeforce’s Bantamweight division and the perpetual contender of the UFC’s, was watching a fight that was promised to her go down from a bar off the Vegas strip, literally half a world away—and figuratively even further removed—from the action.

Frustrated by her legit, but stalled career—one in which she’d managed to do pretty much everything she set out to accomplish except defeated the seemingly unstoppable Ronda Rousey twice—and subject of a near-constant runaround from UFC brass, Tate was considering retirement. Although many tried to dismiss her comments as pouting or an empty threat, if you really look at what she was saying on The MMA Hour, her frank assessment of her options isn’t one of petulance, but weariness and, ultimately, resolution in the face of that weariness.

Calling out pay inequality and the way in which the booking of the Holm vs Rousey match was handled, Tate, who found out about the UFC 193 match right along with viewers when Rousey announced it on Good Morning America, said "I understand they have a job to do. They want to promote, they want to make fights that sell. I get it. But this is also my life and I'm not a robot and I'm not a puppet, and I'm not going to stand for something that I don't feel right about, that I don't agree with.

"The whole reason I do this sport is because I love it, and when the politics get in the way and they start messing shit up—excuse my language—I'm just not going to stand for it. It's not why I got into fighting. It's not why I do what I do. And I'm not going to go out there and put on a crap performance in front of all my fans because I didn't feel right about it." 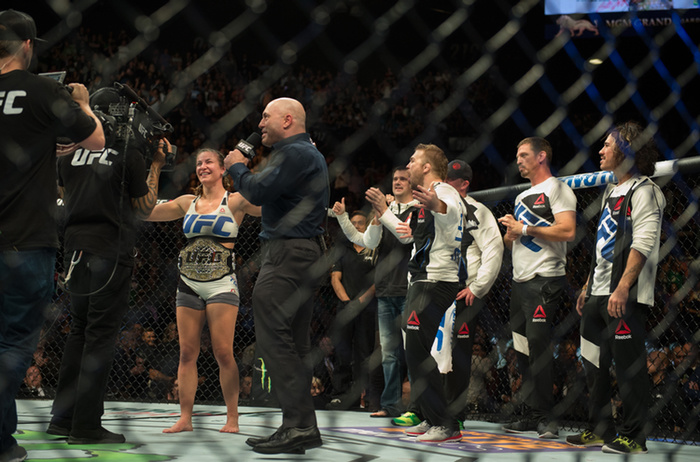 She was aware of how much of a gamble her potential retirement plans were, but remained firm in her conviction. “It's either going to go up in flames or [White] is going to say that I'm making some valid points and make some adjustments," she said. "I'm pretty dead-set on what I feel like I deserve and what I want. I know what I want, and I'm just not going to take anything less. So I guess he's going to have to be prepared to deal with one stubborn woman."

After a quick moment of public schadenfreude in the face of Ronda Rousey’s loss that night, and an even quicker atonement for said moment, Tate set about making her case for a shot at the brand new Bantamweight champion. It was enough to convince both Dana White and Holly Holm, who had no interest in sitting on the shelf while the former champ recovered and worked on other projects, and Holm vs Tate was set for UFC 196.

Within the first few rounds of the championship bout on Saturday night, it became clear that it was the fight of Tate’s life in more ways than one. It wasn’t just a do-or-die moment for her UFC career; it was quickly becoming a metaphor for it as well: one near miss at the belt that was slowly but relentlessly eclipsed by both Rousey and Holm. Tate knew that nothing short of a hail Mary could save her. Just as she’d done in life, she went for it one last time in the cage.

“I knew that I had to risk getting knocked out at that point, that’s what was going to happen,” Tate admitted at the post-fight press conference. “But either way, I was anticipating that fight getting finished in the fifth round.”

Once again, Tate’s gamble in the face of a final stand paid off. With a beautiful display of  determination and BJJ skill, she scored a deep rear naked choke on Holm and held on until the belt was (finally) hers.

No matter how many times she was knocked down in and out of the Octagon before the final round on March 5, 2016, Tate stuck with this philosophy until she Chumbawamba-ed her way to the top of the UFC Women’s Bantamweight division. Getting knocked but getting back up again is now, quite literally, what a champion does.

Tate hosted her official after party just off the strip at a little club called Sapphire.