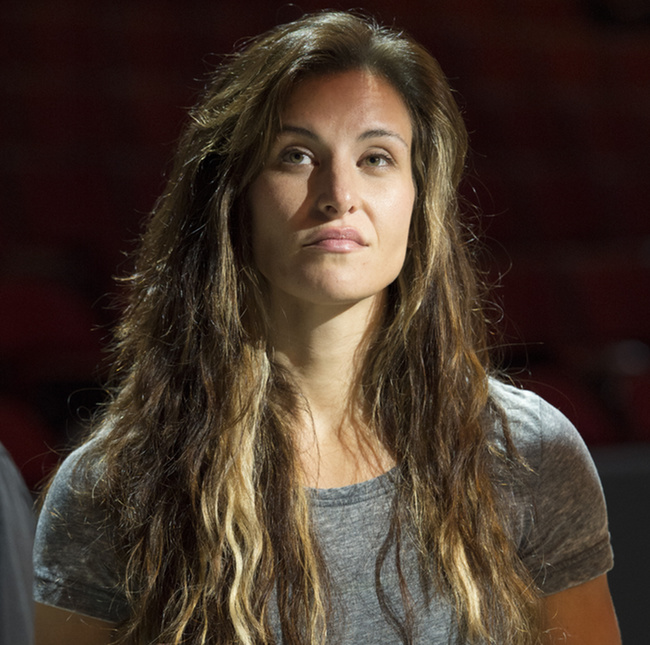 F. Scott Fitzgerald once declared that there are no second acts in American life, but the unpredictable nature of mixed martial arts occasionally allows for their possibility. WMMA veteran and perpetual UFC Women’s Bantamweight contender Miesha Tate is certainly on the verge of one right now.

Just a few weeks ago, Tate was openly considering—or perhaps threatening—retirement from the sport that she helped bring within spitting distance of the mainstream due to what she considered a lack of fighting and financial opportunities in the UFC. She was also facing a legacy that would forever place her in the shadow of Ronda Rousey, as the fighter who came closest to defeating – or at least surviving against—the then-undefeated champ and breakthrough star in their two fights together, the least movable object against an irresistible force.

At what could have been the nadir of her career, though, hosting a viewing a UFC 193 screening party at Sapphire, a Las Vegas gentlemen’s club that was probably not named after half of the greatest British sci fi duo of all time, instead of getting the third shot at Rousey that she believed—and had been told—she’d earned, everything changed. Her longtime rival, the Mozart to her Salieri, lost in a shocking upset to Holly Holm.

Tate didn’t exactly react to the news with anything approaching stone-faced dignity at first. “I’m fucking stoked; fuck Ronda Rousey,” she told MMA News Source in the wake of the upset. “Fuck her and her ‘Nobody has the right to beat me.’ Nobody has the right to beat you? Well you just got beat, bitch... Anyways, I’m proud of Holly. She had a perfect, flawless game plan. She came in with it and now she’s the champion.”

The former Strikeforce champ admits that she now regrets her initial comments on the matter, or at least the tone of them. “Do I think that I could have handled that situation a little bit better? Yeah, I don't think that I handled that the best but at the same time it was this sweeping, overwhelming sense of emotion and it just kind of got the best of me,” she told FOX Sports in an interview on November 23.  “I'm not apologizing for it but admitting that I'm human and that probably wasn't the best way that I could have handled it but I did handle it that way so I'm just going to accept it and move on forward."

With a far more level head, she then went on to make her case for a fight against the newly-crowned women’s Bantamweight champ (and her co-star in the forthcoming low budget feature Fight Valley) Holly Holm.

"Here's why I think the fight with Holly and I makes sense: For one, I haven't ever fought Holly before. For two, I was Ronda's biggest challenge until Holly so obviously I've proven that I'm a standout in the division and so is Holly. If Holly would beat me, then they could still set up that great rematch that they want between her and Ronda. If I beat Holly, then I'm 5-0 and I beat the girl who beat Ronda, what better case could they ever make to have me fight Ronda again? I think that fight sells itself,” Tate laid it out for FOX Sports.

"The thing is she's going to be out too long and I'm ready to go and I think Holly's ready to go so let's set it up in the mean time. When Ronda comes back she'll have a quality champion to face."

She also offered a surprisingly thoughtful and astute perspective on what her rival will be facing upon her return and how best to handle the psychological repercussions of her loss.

"But what does this do to Ronda Rousey mentally? She has never been in this position before so how does she deal with that? I don't know if it's smart to ask Ronda Rousey to get right back in there and face the girl who just knocked her block off. Because mentally, I think Ronda's going to be in a completely different place and a place she's not familiar with and I think she's going to be punch shy and I think if she got right back in there against Holly, she's going to get picked apart even worse and Holly's going to have a new-found confidence and Ronda's going to have a big seed of doubt in the back of her mind saying, 'Man I couldn't do it last time.' And she's going to have more doubt than she's ever had in her career."

Tate, who has been on a four-fight win streak since her last loss to Rowdy in late 2013, argued that she has more experience facing and coming through adversity, and that she can’t picture herself “breaking” in a fight like she believes that Rousey did at UFC 193. She also believes that she’d far better in a match against Holm. “I think I'm more comfortable on the feet and not to say that I think I'm a better striker than Holly, I wouldn't venture that far by any means, but I think I'm more patient and I don't think I would be quite as desperate to run in like a bull chasing a matador. It's about time, it's about experience and I think that the fight is an entirely different matchup and I like that matchup with Holly. I think it would make a fantastic fight."

Holm, for her part, is certainly game for getting back into the Octagon as soon as possible. "I would love to fight sooner than later but that's because I like to be an active fighter. It's nice to have a little time off but then I start to feel like now what's my purpose? I need to strive for something. I want to have a goal," she told FOX Sports in a recent interview of her own with the outlet.

Whether that results in a more immediate match against Tate or the rumored rematch against Rousey at UFC 200 in July is up to her bosses, though. “I would love to be able to have a fight sooner than later but whatever opportunities comes and the UFC presents is what I'm going to go with.”