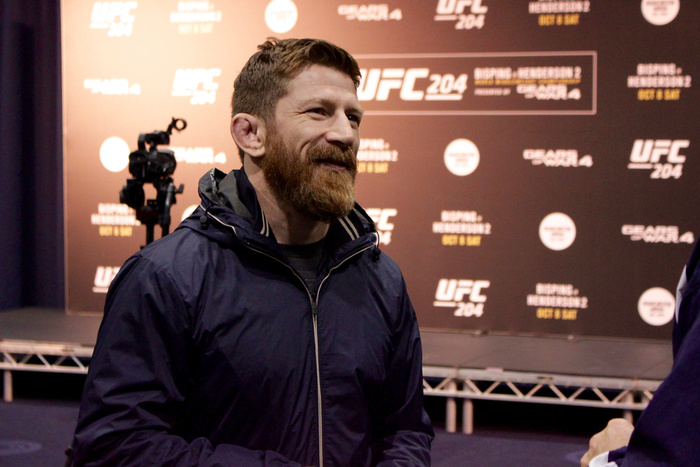 Scores of media members descended on the Manchester Central Convention Complex for the UFC 204 media day on Thursday.

As a handful of fighters are brought out to speak to the excited gathering, former world featherweight champion and American Top Team coach Mike Brown sipped on a cup of coffee and chatted to some fellow coaches in the background.

The reason Brown is in town is to corner Brad Pickett, but it is a new addition to the ATT fold, strawweight world champion Joanna Jedrzejczyk, that has me interested in speaking with him.

Jedrzejczyk said working with the former WEC champ was one of the main factors behind her decision to move to the gym, and Brown is anticipating a rapid development in the Polish starlet on the back of her decision to join the team.

“I’m expecting a big learning curve and I think we’re going to see big gains because we’ve already seen them in the first month,” he explained, while nursing his coffee cup. “In a year’s time, I expect her to be on a completely different level.”

Another bonus to moving to the Florida gym is to have more female sparring partners available to her. Brown believes that some important elements of sparring can be lost when women spar men and that Jedrzejczyk will only benefit from more time spent exchanging with other females.

“It’s a little more realistic,” he told me. “When women are sparring women, there is a little more competitiveness. Of course, when you have a guy and girl going it’s competitive, but there’s still something going on in the back of both peoples’ heads.

“It doesn’t effect Joanna, but generally there is a little bit more of a push when it’s a girl sparring another girl. They’re kind of sparring for that spot to be the alpha female of the pack. Both fighters are fighting for that, so I think that’s important.”

Will Brooks claimed that he was quite taken aback by the skillset of the Pole when she first moved into the gym. Similarly, Brown had nothing but good things to say about the 115 lbs queen from what he has seen at ATT so far.

“She’s been very impressive,” he said. “She has an amazing work ethic and she is always putting pressure on herself to improve. I think that was a big part of the move.

“She doesn’t allow herself to be comfortable, she strives for perfection and that’s very impressive.

“Her standup is incredible. The power she has for 115 pounds is quite jaw-dropping. The velocity of her shots too—she throws really hard and really fast—and she puts her combinations together really intelligently.

“We’ve all seen her fight, right? Well, it’s just as impressive in the gym.”

Given her amazing proficiency in the striking department, Brown is aiming to improve Joanna’s grappling skillset to make her one of the most versatile fighters in the sport.

“She is the best female striker in the game and now with the grappling and wrestling at ATT and her work ethic, I expect her to become one of the most well-rounded fighters in the game.

“She’s going to have a lot of coaches and training partners isolating different things she can improve on. Anytime you go to the gym you’re going to discover a lot of new ideas, philosophies, and techniques. You might not use it all but you’re going to use bits and pieces of it and that makes you improve quickly.”

The constant pressure that champions are put under is no secret in combat sports, but Brown admitted that ahead of her first fight as a member of the ATT squad, there is an expectation on the shoulders of the coaching staff as well.

“Of course there is a little bit of pressure on the coach. You want her to be successful and show improvements. I’m very confident that we will see those improvements.”

Jedrzejczyk has continued to grow in her capacity as champion since she claimed the title off in March 2015. Her stunning striking, ability to sell fights and her determination to completely separate herself from the rest of the strawweight field has been a joy to watch for fans of the sport.

Brown believes the champion is only getting started and is confident that she can go on to become a bigger household name than Ronda Rousey due to her charisma and fighting ability.

“She’s super charismatic. I love her attitude and her style. She doesn’t want to be friends with her opponent. She wants to put up that barrier and get in her opponents’ head.

“She’s really refreshing in that sense. I think that’s one of the things that makes her fights so exciting. You almost feel that bad blood with every fight.”