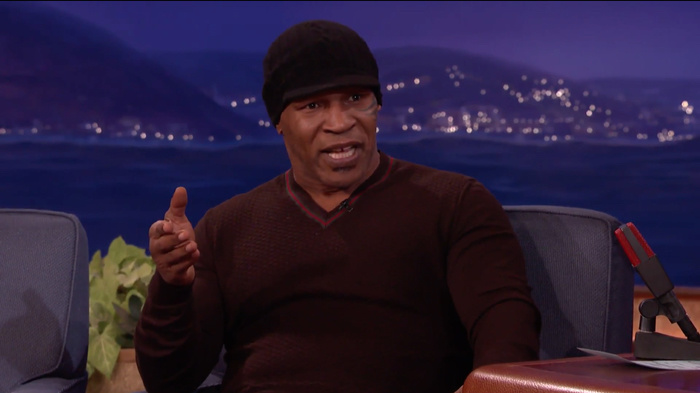 Twenty five years after Mike Tyson’s reign as the most terrifying man in America ended the man has become a national treasure, the embodiment of the American dream in all its splendor and trash: a man who pulled himself up from nothing to the heights of fame and wealth, crashed back down to earth in spectacular fashion, the victim of his darkest impulses, and was reborn again as a warrior-philosopher-entertainer in peacetime and welcomed back into the warm embrace of American celebrity: a king of self-awareness in age of delusion.

Last night Tyson was a guest on the Conan show, and host Conan O’Brien asked the former heavyweight boxing champion if he had any advice for former UFC bantamweight women’s champion Ronda Rousey, who, like Tyson when he lost his belt to Buster Douglas back in 1990, recently suffered a knockout loss to a relatively unknown opponent after building a reputation as an invincible and indestructible fighting force, and who has spent much of the last two months in seclusion, hiding out, sources said, from the shame of defeat.

“You know she’s not out there a lot, she’s not communicating a lot. She’s been through a huge upset,” O’Brien said, aware that Mike Tyson is the poster child for second acts in American life, even after the most brutal deaths. “What would you tell her?”

At first Tyson responded like a life coach urging a traumatized patient back into functionality, and like a wizened fighter, resigned long ago to the cold realities of their chosen profession.

Fair advice that Rousey seems to be taking this week: at long last re-appearing in public, advertising her friendship with comedian Amy Schumer and her wished-for friendship with actress Jennifer Lawrence online, breaking the news that she’ll be starring in an upcoming movie with Tina Fey, and appearing in promos clips for her hosting stint on Saturday Night Live this weekend.

But Mike Tyson, our Mike Tyson, doesn’t stop at therapy-speak, not the Mike Tyson who ignored the dead platitudes and pabulums of the fighting athlete back when he was champion, the Mike Tyson who compared himself to Alexander the Great, referenced Machiavelli, threatened to eat his opponents’ children, and, like Marcus Aurelius, proclaimed that “real freedom is having nothing.” This Mike Tyson, who despite his lisp, his meager formal education, and his barbaric choice in profession was always more eloquent and philosophically inclined than just about everyone else, sophisticates and prudes and racists and literary types be damned, shows up even in the intellectual desert that is the American late-night talk show to dispense wisdom.

“[Ronda’s] just unfortunate that she’s a Goliath,” Tyson continued. “David’s a great king. He done great things. He built a civilization, King David. He built a civilization. But he’s more famous for beating Goliath. He’s never out of Goliath’s shadow. Like the young lady [Holly] Holm: She’s never gonna be out of Ronda’s shadow. That gave her her life-ticket, her meal ticket, and that’s a wonderful thing.”

And as if to prove how right Tyson is, right about the time he was dropping knowledge on Conan’s couch, Rousey’s conquerer—her David—Holly Holm, and Holm’s next opponent (and Rousey’s longtime nemesis) Miesha Tate were taking part in a press conference about their upcoming fight on March 5, and all the assembled reporters wanted to talk about was Ronda Rousey: whether Holm was happy or sad that her next fight would not be a rematch with Ronda Rousey, whether Tate was happy or sad to be fighting for the belt against someone who wasn’t Ronda Rousey (Tate’s bête noire, who has already beaten her twice in title fights), whether the two women believe Ronda Rousey will ever fight again.

So Holm replied: "For me I want to keep fighting, and if Ronda wants to come back and that's her passion, great. If she wants to stay in movies, great. I think that I would rather meet someone in the cage when they're passionate about it. I don't want it to be because they feel like they have to or it's expected or other people are curious about it. It's Ronda's life, I want her to do what she wants to do."

And Tate said: “It's just a different kind of feeling leading into this fight. I'm a fan of respectfulness and I think Holly is a true sportsman. It's a good match-up. It's a little refreshing not to have to be against Ronda and have the drama of seeing each other all the time. Holly and I are very friendly.”

The champion wants passion, and the challenger like things friendly, and all we heard was Ronda Ronda Ronda. Because Mike Tyson is right: Holly Holm may be the conquering hero and Miesha Tate the scorned challenger redeemed, but they both rise and fall in relation to Ronda Rousey, and always will. Ronda Rousey hasn’t just made women’s MMA a reality in a skeptical world, she’s defined the lives and careers of every woman she’s fought: lifting them up, dashing them down, but always ensuring they exist as characters in her story.

A Brutally Honest Look at Mike Tyson versus Muhammad Ali