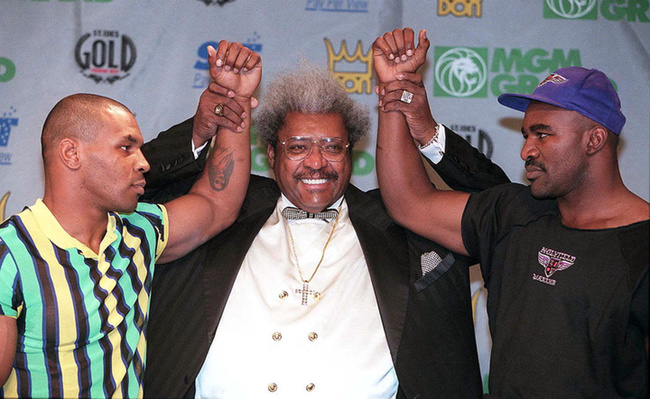 When Evander Holyfield is inducted into the Nevada Boxing Hall of Fame on August 9 at The New Tropicana in Las Vegas, the five-time heavyweight champion enters alongside a group of 18 that includes George Foreman, Jack Dempsey, Roberto Duran, and other esteemed pugilists. But the evening is sure to be more than another semi-meaningful acknowledgement of another retired athlete.

That’s because Mike Tyson, a 2013 inductee and the guy who once chomped off a piece of Holyfield’s ear in the ring, will be making Holyfield’s introduction.

It’s been a little over 17 years since June 28, 1997, when the event dubbed “The Sound and the Fury” devolved from an eagerly awaited heavyweight title into a public display of attempted cannibalism. Holyfield had TKO’d Tyson the preceding November, and this was Iron Mike’s second crack at wresting the WBA Heavyweight Championship from The Real Deal. For two rounds, it was a spirited, competitive, and grimy rematch. But after an aggressive start in third round, Tyson grew frustrated at Holyfield’s headbutts—one of which drew blood from Tyson’s right eye in the second round—and saw a chance for retribution in the clinch. He bit off and spat out a section of Holyfield’s right ear, and shoved Holyfield as he hopped away in agony. Tyson received a point deduction, the fight continued, and very shortly after, he nibbled on Holyfield’s other ear, too. 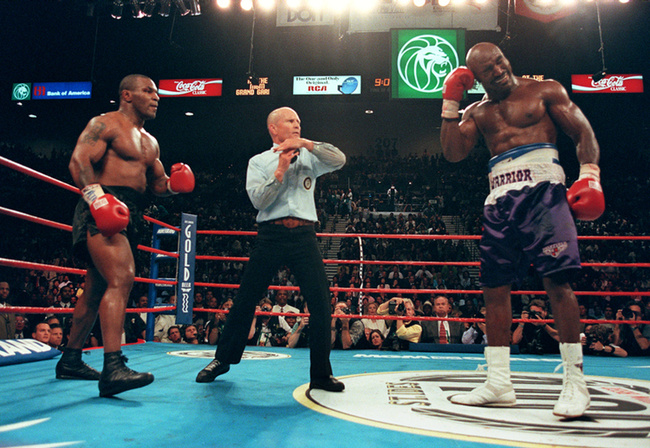 The round ended, and after some chaos and confusion, the outcome was clear: Tyson was disqualified, and the fight was over. He was fined $3 million, and a statue of his likeness in the Hollywood Wax Museum was moved away from Michael Jordan and next to Hannibal Lecter. It wasn’t the first time one boxer ever bit another, but the high profile of something so visceral and unsettling was a novelty. If it’s not the most referential boxing match of the last 20 years, it’s up for consideration, and for all the wrong reasons.

The fight came near the end of Holyfield’s late 1990s renaissance of a career that continued until 2011. Meanwhile, Tyson called it quits in 2005 and went on a very public rehabilitation of his very public image, in which mainstream perceptions of Tyson changed from that of a terrifying brute, to a tortured and fragile man, to a joker and raconteur. 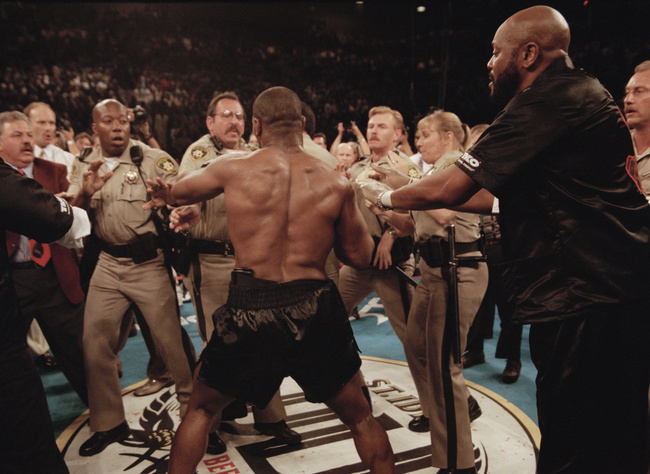 Police officers try to restrain Mike Tyson as he goes on a rampage after the bout was stopped. Photo by Michael Brennan/Getty Images Sport Classic

It hasn’t always been a linear path between those last two stages. In 2009—the same year Tyson broke through with The Hangover—he and Holyfield appeared alongside one another on Oprah, which is as suitable a venue as any for fighters to resolve the sorts of disputes that don’t get finished in the ring. Holyfield forgave him, the two shook hands, and any remaining bitterness disappeared. Tyson is a living example that second acts can exist in America, especially with an intermission filled with as much contrition and soul-baring as his has been. Holyfield has the capacity to forgive, sure. Then again, Tyson’s the guy you can’t stay mad at, even if he tore away a piece of your cartilage with his incisors.

Now, Holyfield’s ear is still gnarled. But with the pain long gone, all that’s left is comedy. Last fall, the pair appeared in a Footlocker commercial lampooning the episode: Tyson appears at Holyfield’s doorstep and says, “I’m sorry, Evander.” He presents a small box: “It’s your ear.”

Come to think of it, it’d be strange if anyone other than Iron Mike did the honors on August 9. He and Holyfield are two halves of one of the most notorious encounters in boxing, a historical footnote with the sort of shock value that ensures its survival for future generations. A few decades from now, no one will believe it ever happened, at least not at first. (“He bit it off?”). Then they’ll recoil and cringe. Then they’ll laugh. And then they’ll forget about it and move on, like it never even happened.