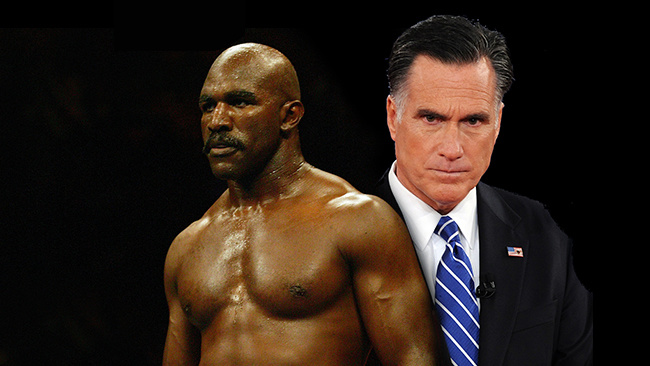 Forget Mayweather vs. Pacquiao for just one moment. Here’s a piece of breaking boxing news for you: 68-year-old political veteran, ambassador of capitalism, former governor of Massachussetts and 2012 contender to President Barack Obama’s presidential strap, Mitt Romney, will participate in a boxing match for charity. Romney said that it would be a lot "better to provide this kind of entertainment rather than just have dinner and listen to speakers.”

And he’s not just boxing some random old dude. Romney’s going to the take on 52-year-old former heavyweight champion of the world Evander Holyfield. Holyfield has a 44-10-2 record. Romney will be wearing full protective gear: he told the Salt Lake Tribune that “It will either be a very short fight, or I will be knocked unconscious.”

Holyfield, who is famous for his legendary combats with Mike Tyson in the 90s, last fought in 2011, when he defeated Danish boxer Brian Nielsen.

The fight—which happens on May 15th— will be for CharityVision, a Utah-based organization dedicated to helping doctors in developing nations perform surgeries on people who suffer from curable blindess. One of Mitt’s sons serves as volunteer president of the organization.