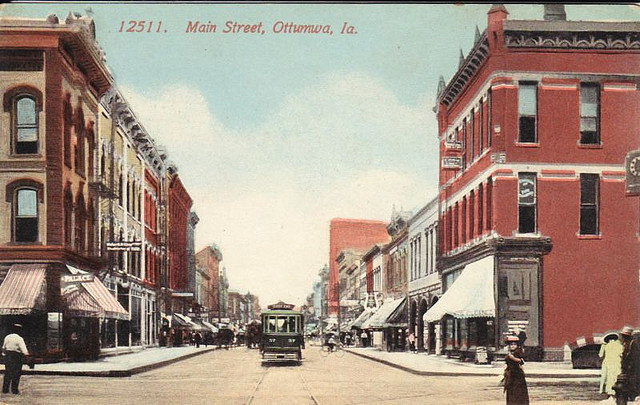 On a map, the 97.2 miles from Iowa City to Ottumwa look like a backward capital “L” with almost perfect lines. You travel south on the Avenue of the Saints — so-called because it traverses the 563 miles between St. Louis and St. Paul — and then head west on U.S. Route 34, a 1,122- mile stretch connecting Granby, Colorado, to Berwyn, Illinois. The U.S. Numbered Highway System has largely been supplanted by interstates, but the barns and hills and stars are not nearly as good on those. The Facebook event for Throwdown 15 says the fights begin at 7pm, and I tell myself to leave by 4pm, but I am slightly hungover, first from drinking one more whiskey than I should have, then from my attempts to bring myself back to baseline — two lengua, two chorizo, one cabeza, and one carnitas, tacos, please. I finish eating and have just enough time for a nap, but I'm nervous, so I masturbate instead, twice, blinds drawn.

I do not regularly consume televised athletics, and I can count the number of live events I've attended on one hand. Still, before my friend Thor moved to a small multi-million-person metropolitan area in China, I'd enjoyed going over to his house to watch UFC events on his giant television. He would rearrange his furniture, all available seating moved to the living room, and a crowd primarily composed of writers would squeeze in. Surrounded by the bobble heads, pennants, and posters that graced almost every available surface and proclaimed his allegiances, my periodic indulgences slaked ever so slightly what seems for me an unslakable thirst for blood.

The aforementioned event page for Throwdown 15 listed a 13-fight card that was later updated to an eleven-fight card that shrunk, without fanfare, to 10 on the evening itself. With the white-yellow sun descending, turning yellow-red and warming my face, I drive for over 90 minutes, through snow-less rolling hills, to the Bridge View Center, a multipurpose venue on the banks of the Des Moines River. It's dark by the time I arrive and the Jefferson Street Viaduct looms over the parking lot aglow with a row of blue lights. During the day, such a homely concrete bridge lying almost on top of a medium-small convention center would be probably less charming, but one can never underestimate the benefit of flattering lighting. The parking lot is almost full and even though I've washed my hands at least three times, the tips of my fingers still smell like meat, cilantro, and raw onion. I sit in my rental car watching clumps of people stream toward the building, and a small part of me is glad that none of my friends wanted to or could come, but all of the other parts wish that I'd brought along someone male-identified and/or white. I decide against taking half an Ativan, unbuckle my seatbelt, and get out of the car.

The majority of my pre-event reconnaissance consisted of reading the Facebook event page and thinking about what to wear. When I asked around to see if anyone would want to come with, not a single person responded in a way that didn't connote or denote, at its mildest, surprise, at its starkest, a withering incredulity.

But what’s so amazing, exactly, about a brown girl wanting to see two handfuls of men beating the shit out of each other in small-town Iowa? I have been in plenty of predominantly white spaces that are varying degrees of hostile. If a nice, bougie girl like me isn't found in places like the Bridge View Center on nights like Throwdown, who is? The part of me who wished for a chaperone was apprehensive. Living in Iowa City, I tend to stay home on game days in the fall because hordes of white people, of certain sorts, make me feel unsafe, and they don't even have to be drunk.

In Ottumwa, hometown of Tom Arnold and famous, according to my employer, for "loose meat sandwiches,” I found myself interested in spectra, in mapping them for the purposes of classification. When I'd woken that morning, a little fuzzy-headed and needing to pick up the damn car, I put on the dress I'd worn the night before because it was easy, and I don't count clothes as dirty if I put them on after a late-in-the-day, pre-bar shower and manage to make it home without spilling on myself or dancing til I'm sweaty. As I sat amidst the hustle of the lunch rush at La Michoacana, a plate of tacos and a plastic fence of hot sauce bottles between me and my friend Larry, I said "The only thing is, I don't know what to wear." Larry nodded because he understands the linguistic importance of clothes. "I was wondering that," he said. "What you have on now is fine." I looked down at the turtleneck dress I wore, how it covered me from wrist to neck, from neck to knee, stopping just short of the tops of my frumpy, brown mukluk-style boots. The cut of the heavy navy fabric is rectangular, with a drop waist that sits at my hips just before a skirt that bursts tidily into wide box pleats. I love and hate that the garment reverses my proportions. Without it, I possess a short torso and legs that turn into whorish denim panties what for other women are ever so slightly, tastefully immodest shorts. Encased in that dress, I diffuse something stern and forbidding that verges on Puritanical schoolmarm. "I'm covered from stem to stern," I said, fingers dripping with lime juice and meat juice and hot sauce. Larry laughed. "Exactly."

The micro-aggressions start as soon as I enter the Bridge View Center that night. The two men ahead of me see my approach in their periphery, and the second one, already through, pauses to hold the door. His face is neither kind nor neutral, but grudging, like there's a short circuit somewhere. It tells me he holds the door because I have a vagina, but it does not conceal his discomfort with the reality of the skin on my hands and face, the only parts of me he can see. I use my sweetest voice to say, "Thank you." I smile and make the sort of purposeful eye contact that says I am grateful, because I am grateful. I take his kindness as a sign that the evening will be predictably problematic. I repeat the man's action for a teenaged girl who's an equally awkward distance behind me, holding the door for her. I look into her face and my mouth starts to smile in anticipation of her "thank you," but she does not make eye contact or even raise her gaze in my direction. There is no "thank you" and the well-civilized part of me is irritated at her nonexistent home training. The man ahead of me is still holding the second door, so I smother my disdain for her and pour on the charm for him. "Thank you," again, even sweeter-sounding and kinder-eyed, but, because I am poor at turning the other cheek, as soon as I am through the second door, I let it go.

With the exception of a few outliers, the spectrum of masculinity on sartorial display at Throwdown 15 runs from Larry the Cable Guy to Vanilla Ice. Varying styles of hunters' camouflage and forward-facing baseball caps pulled low, dark-colored hoodies and conservatively cut jeans, chinstrap beards and bald spots all abound. Because I am not even showing my neck, I am easily the most covered woman in the building. It feels a little silly. I feel a little silly. The Bridge View Center, riverside and 92,000 square feet, doesn't look like something you'd find in a 25,000-person town, but there it was, bustling with a small cross-section of almost exclusively white people (my unscientific tally of people of color only made it to 15, myself not included). I am standing in line at “will call” when I notice a sprinkling of people who don't (yes, I know) look like the audience for an MMA fight. There are a dozen or so elderly couples, mostly sitting at tables in what could be called the building's atrium, waiting, a little bemused by the hubbub. Bridge View contains meeting rooms, the 30,000 square-foot expo hall where, that night, men will beat each other bloody, and the 655-seat theatre where the vocal ensemble Five by Design will perform "Five by Design's Club Swing":

Banners hanging from the ceiling advertise upcoming events. In the venue's near future, there's Larry, patron saint-style icon and Cable Guy, and a local production of The Producers. The women in line ahead of me, like most of the women I'll see all evening, wear feminized versions of the clothes of their men. They're nondescript except for their matching fleeces, magenta, and hot pink, respectively, and adorned at the shoulders, front and back and down to armpit height, with hunter's camouflage. They are garments not for the hunt but for marking the allegiance of their wearers to the area's dominant culture. I ignore the man and woman and three boys under 10 who keep looking at me from the other line, and I feel the type of elbow you feel when you're a person perambulating alone who chooses not to cede the sidewalk to packs of assholes who feel entitled to walk abreast in twos and threes. But this elbow is a bit more firm. I look to the side of impact, find no one, and I turn my head in the other direction just in time to catch the retreating back of the girl from the door. I look at the ceiling, halfway through an eye roll, and whisper-sigh, "White people."

"Did the seas part or did you blend in?" my friend Larry asks two days after Throwdown. We are sitting at his dining table, wine and cheese and Spanish peanuts between us, about to talk about a draft of the poetry collection I've been working on for the past year. He’s referring to our pre-fight taco luncheon, when we were talking about clothes and how he thought it best that I experience the event alone. "Either the seas will part or you will blend in," he'd said that afternoon. Did the seas part or did you blend in? "Both," I said, shaking my head. "Neither."