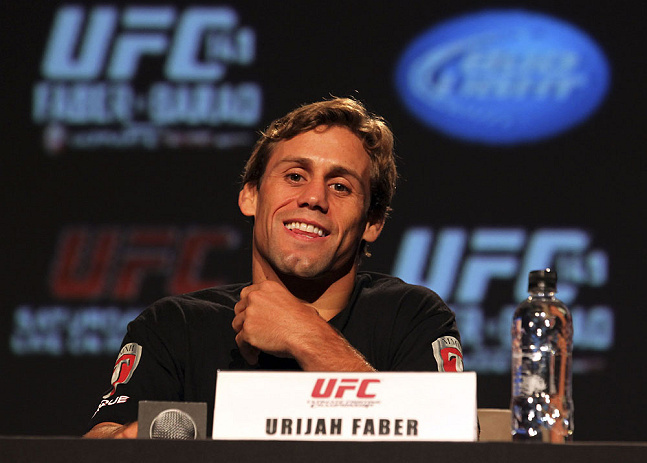 Unlike other sports, MMA is constantly having to prove itself to the straight world. It's not enough for the sport to be entertaining; MMA also has to convince middle America that it's acceptable -- that fighters aren't brutes and fights aren't bloodbaths.That's why the moves MMA and MMA fighters have made over the last decade through the classic gateways of mainstream cultural viability have been such huge deals. Chuck Liddell on HBO's Entourage, Jon Jones on The Tonight Show, MMA movies starring villains from Batman movies: Even more than tickets sales and pay-per-view buys, these are the truest indication of how far MMA has come in the conventional imagination.

So, it was pretty significant when UFC bantamweight Urijah Faber showed up earlier this week on daytime television, the beating heart of the American middle, where even the most controversial subject goes to get cleaned up and made safe. Faber was a guest on The Doctors, a "health" roundtable talk show where attractive members of the medical profession give advice to former Oprah audience members and then scare them to death with tales of outrageous diseases that are probably lurking in their chidren's kindergarten classrooms. It's a medical twist on that blend of suburban fear-mongering and gauzy beefcake admiration so particular to American daytime television -- a show designed both to scare and arouse young mothers into overdiagnosing their children and then buying holistic medicine to cure them. Doctors segment titles promise lurid tales of mystery diseases and the heroic (and handsome) doctors who can stop them: "Every Mother's Fear." "The Most Beautiful Doctors in America." "Are You Allergic To Your Orgasms?"

In other words, The Doctors is both the worst and the best place for MMA to attempt its latest break into the mainstream, and it's fascinating to watch Faber allay the fears of the show's studio audience with his million kilowatt smile while lightly stoking those fears with tales of long training sessions, difficult weight cuts, and brutal leg kicks (Faber, it turns out, has "Shins of Steel"). Make whatever jokes you want about the intelligence of MMA fighters; Faber has an inborn genius for finding the perfect balance of comfort and terror needed to sell a product in America. He's also the perfect cultural ambassador for a combat sport: handsome, friendly, blond, and small. I bet "The California Kid" even convinced at least a few of the members of The Doctors audience that he and his fellow MMA fighters aren't coming for their children.