By Words by Dan Shapiro, Photos by Egill Bjarki 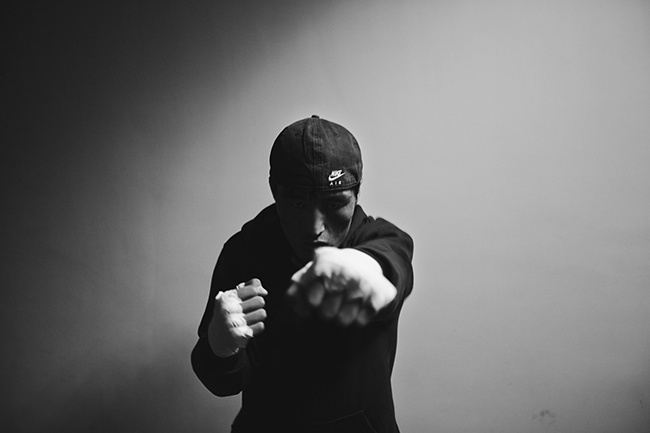 Starting a mixed martial arts organization is a risky endeavor. Promoters invest sizeable fortunes in advertising, building infrastructure, conducting detailed market research, and doing rigorous strategic planning to command market share. But in China, a country where thousands of ex-pats are currently faking it till they make it, why bother with the business plan? It’s the birthplace of martial arts, after all, so MMA must be a lock.

This principle assumption laid the shaky foundation for the Ranik Ultimate Fighting Federation (RUFF), China’s first government-sanctioned MMA promotion, which announced its arrival on December 6, 2010, with an extravagant press conference at Shanghai’s Obama Club. Unfortunately for RUFF and founder Joel Resnick, a Canadian textile entrepreneur with over a decade of experience in China, no one ever bothered to ask China and its 1.4-billion citizens if they were even interested in MMA. 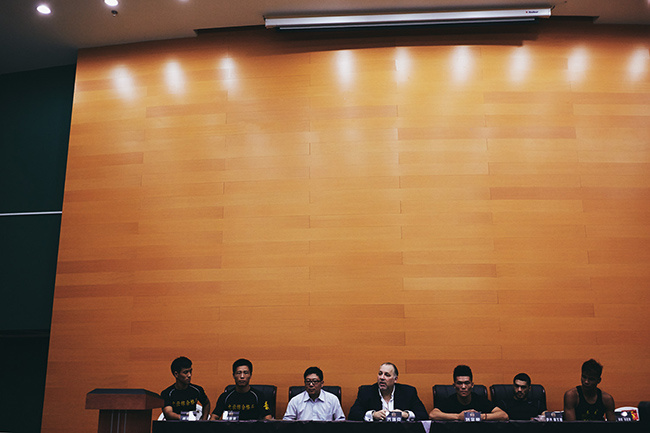 Having forked over 1 million RMB to the General Administration of Sport of China Wushu Administrative Center (Wushu), the country’s regulating body on combat sports (which amounts to a collection of chain-smoking cronies), for an “exclusive” one-year license to promote MMA in Mainland China, RUFF debuted on August 27, 2011, with RUFF: Genesis. The promotion pre-sold some 92 tickets to the 15,000-seat QiZhong Tennis Center, eventually managing to attract an additional 2000 fans through last-minute giveaways.

Resnick, along with his co-founders--Saul Rajsky, with whom he ran the Ranik Group, a Shanghai-based clothing buyer for major brands like Nike and Adidas, and Lin YanMing, a dubious character who claimed to be the United Nations first-ever simultaneous translator--chalked up the financial and promotional failure of their first event to inexperience and quickly moved the promotion to Chongqing, a second-tier municipality in south-central China, where overhead could be minimized.

RUFF 2, which was co-promoted by Chongqing Television, went live on December 17, 2011. But after failing to fill the 3000-seat JiangNan Sports Center--promoters handed out hundreds of unsold tickets an hour before the event only to see the recipients turn around and push them onto the re-sale market rather than watch the fights--Resnick and RUFF called yet another lavish presser for their next attempt at a return on their “can’t miss” investment: the Super Fight, an annual 1-million RMB championship event to crown the country’s first mixed martial arts title holders. 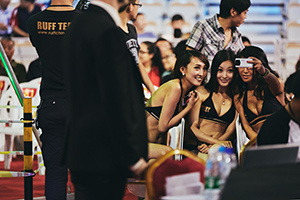 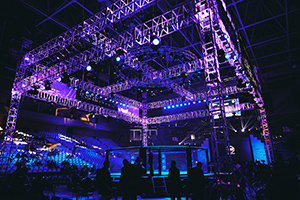 On March 14, 2012, Resnick, his then-19-year-old matchmaker son Brandon (neither of whom spoke Mandarin and were thus unable to communicate with their fighters or government cadres), and noted Shanghai Media Group broadcaster Wang YiNan unveiled the Super Fight during a rooftop affair at the M1NT nightclub, overlooking the exquisite Shanghai skyline.

In attendance were a dozen media outlets, all of whom received cash payouts, or hongbao (红包), to cover the event, another half dozen RUFF staff, eventual featherweight champion Wang Guan, bantamweight Ayideng Jumayi, lightweight Wan HongChen, and light heavyweight Robert Sothmann, a Canadian journeyman who qualified under RUFF’s provision allowing China-based foreigners to compete. Conspicuously absent were all members of Wushu and the seven million RMB of physical tender the promotion had wanted to lay out as visual bounty to represent the event's seven weight classes, supplanted instead by a notice of credit holding. Also missing was Simon Pestridge, Nike China’s VP of Marketing, who offered RUFF a product-only sponsorship, allowing the promotion to place the swoosh inside the 八角台 (the Chinese equivalent of the UFC Octagon, used at all times to avoid copyright infringement) in exchange for sneakers, MMA shorts, rash guards, and assorted apparel.

The Super Fight, which was announced in tandem with RUFF Journey, a documentary reality-TV series chronicling the lives of their athletes, would assuredly create a media storm that would raise public awareness of mixed martial arts in the world’s most populous country. From here, mainstream China would embrace MMA, they would know RUFF and purchase tickets and merchandise en masse, and sponsors would clamor at the chance to place their logos inside the cage.

Or so they thought … 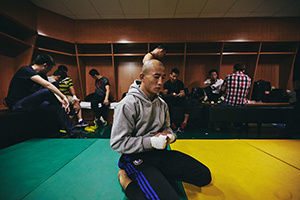 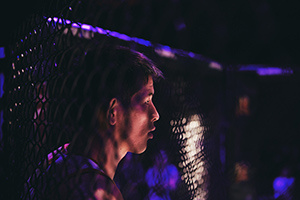 Immediately following the Super Fight press conference, RUFF seemed to turn a corner. RUFF 3, which was held on March 24, 2012, was a brief burst of success for the promotion, as they managed to fill Chongqing Indoor Stadium with the help of Chongqing Television and a small army of organized scalpers known as huangniu (黄牛).

And while 3500 fans cheered on highly touted bantamweight Jumabieke Tuerxun during his split-decision win over Irshaad Sayed, a South African national based in Hong Kong, and jeered the judges’ decision in the main event, which saw Hong Kong-based Brazilian Rodrigo Caporal top lightweight Zhang LiPeng by majority decision, rumors of cheating, illegal hand wrapping, and the use of Tiger Balm on the skin, which is forbidden in the Unified Rules of MMA, began to circulate throughout the promotion. 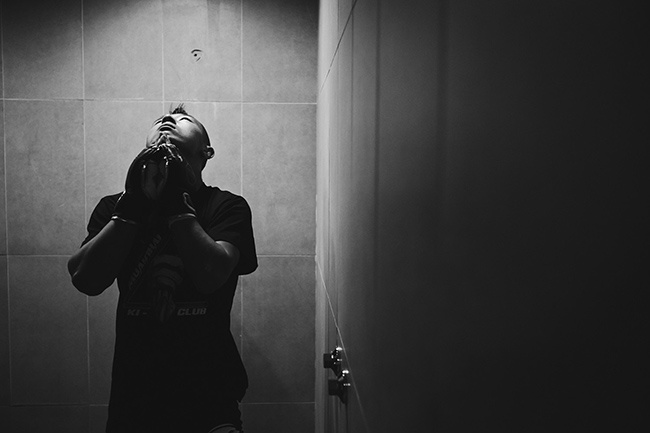 Still, RUFF 3 had been a success, and the promotion again moved operations, this time to Hohhot, Inner Mongolia, a rugged industrial city in northern China and home to many of the country’s top fighters. Although the Super Fight announcement hadn't attracted the mass influx of talent the promotion expected, Ultimate Fighter veteran Andy Wang, a Taiwan national; Sandro da Silva, a Brazilian based in Macau; and Arthit Hanchana, a Thai citizen living in Guangzhou, all signed on for RUFF 4, which was held on June 30, 2012, at Inner Mongolia Indoor Stadium.

The location change was a huge setback for RUFF, as they were only able to fill a quarter of the stadium’s 8000 seats, most of which were handed out to bank employees and low-ranking military personnel by a local karaoke mogul and gangster known within the promotion as “Big Bacon” and whose Meng Liqin Culture Media group had become a minor sponsor. Andy Wang backed out two weeks before the event, da Silva was thoroughly battered for 15 minutes by Wang Guan in the main event, and Hanchana pulled a stunning upset over Zhang LiPeng, submitting the Inner Mongolia native and fan favorite via triangle in the third round.

Still, the promotion limped forward toward its next event, RUFF 5, which, on September 8, 2012, became the first combat sports event in Chinese history to air on live television.

The event was marred by its own share of controversy. During the weigh-ins, the promotion failed to properly calibrate the scale. As a result, a vast majority of the fighters came in over weight and then quickly retreated to the Sheraton Hohhot’s sauna to drop an additional kilo or two. Actual figures from the weigh-ins were never released to the public, as RUFF adopted the Chinese social practice of mianzi (面子), or saving face, rather than admitting any fault.

The event also signaled the return of eventual flyweight champion Zhang MeiXuan, who was making his first appearance inside the 八角台 since his coach, Xi’An Sports University’s Zhao XueJun, had negotiated his release from prison, where he had been incarcerated for kidnapping, assault, and extortion. 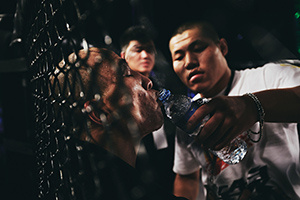 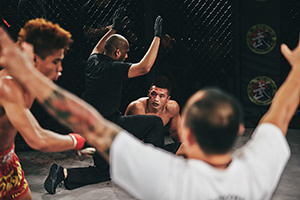 By this point, the fighters had begun to realize their leveraging power over RUFF, which still only had 45 fighters under contract and had been unable to lure top Chinese athletes away from competing promotions like the now-defunct Legend Fighting Championship. So by the time RUFF 6 rolled around in November 2012, fighters and their managers were applying pressure for larger purses.

First to jump off the RUFF ship was fan favorite Zhang LiPeng, who defected from coach Ao HaiLin to the Beijing Fighting Empire team. Following his new manager Jiang Hua’s lead, Zhang pushed for more money and the dissolution of the exclusive clause in his contract. RUFF instead chose to cut one of its brightest stars to set an example, erasing him from the roster completely. He would go on to become the first winner of The Ultimate Fighter: China, where he took a split decision from Wang Sai, a top-tier prospect who'd thwarted RUFF’s contractual advances altogether.

Next to leave was Hanchana, who was slated to face Caporal in the RUFF 6 main event. After Caporal missed weight by 500 grams, Hanchana was prompted to refuse the fight, despite the guarantee of 20% of the Brazilian’s show money. In the end, the main event went on as scheduled but only after Hanchana’s manager successfully shook Resnick down for an additional, undisclosed, sum. 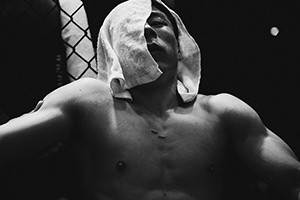 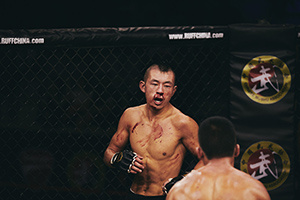 As is often the case in China, contracts are a mere formality to further negotiations, and a week prior to RUFF 7, which was slated for December 21, 2012, at Nanjing’s WuTaiShan Stadium, the promotion was informed by their local television partner, Jiangsu TV, that the stadium would not be available for the event unless an additional payment was made to re-paint the venue and pay off the fire department. Rather than cave in to those demands, Resnick assembled a makeshift film crew and relocated the fight card to the 89-story ZiFeng Tower, promoting what would become the world’s highest MMA fight and cramming some 400 spectators into a space generally used for fashion shows and corporate events

Then on February 2, 2013, the long-awaited Super Fight finally went live from Inner Mongolia Indoor Stadium. Again, attendance was sparse, despite its being the fourth event held in the same venue in seven months. Again, major renminbi (人民币) was spent on promotion and production, with little to no return. 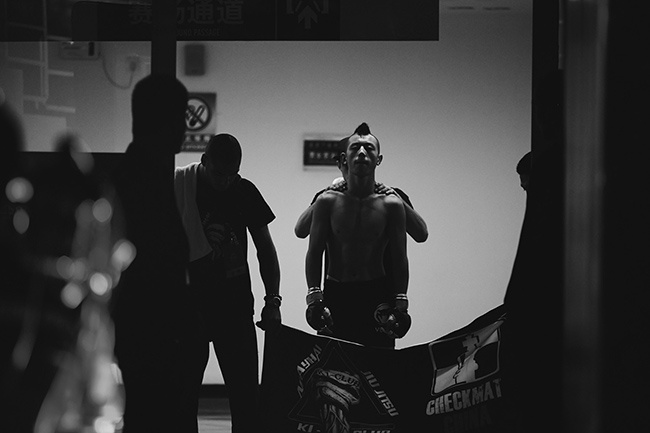 After the disappointment of the Super Fight, RUFF’s dream of a Chinese MMA promotion “in China for China” collapsed. Finally coming to the realization that the world’s most populous nation could not provide enough athletes to fill their promotional roster, and understanding that the Chinese public’s appetite for mixed martial arts was still shaky, RUFF relaxed its matriculation criteria, allowing an influx of foreign talent from Mongolia, Russia, and former Soviet republics.

RUFF is still putting on fights, albeit far more sporadically than the six-to-eight annual events they guaranteed their fighters. A second Super Fight never materialized. Meanwhile, the UFC and other regional promotions like Real Fight MMA have started to saturate the Chinese MMA market, looking to do what no promotion has done yet: make MMA believers out of the Chinese people.

The Shady Business of Promoting MMA in China