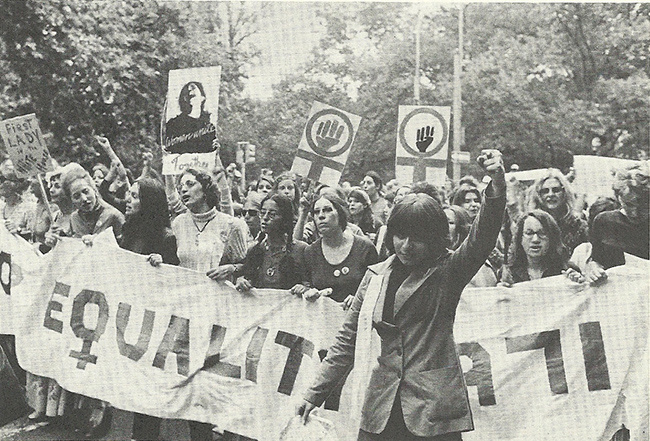 The debate over whether or not to sanction mixed martial arts in New York is good and stuck. Pro- and anti-MMA advocates have spent countless amounts of money and time at the state capitol in Albany by this point, lobbying, pushing, prodding, protesting, demonstrating, educating, and lacerating, but they're essentially in the same place they started: with a State House entrenched, a State Assembly leader defiant, and a sport in legislative limbo.

Last week, a new front opened up in the war over legalized MMA when New York National Organization for Women President Zenaida Mendez sent a letter to New York Governor Andrew Cuomo slamming him for promoting new women’s equity legislation while at the same time advocating for the legalization of MMA. “We know that violence begets violence,” she wrote. “We know that violence in sports exacerbates violence within the homes of women and children. Time and again, it has been proven that when children witness violent sports, they become desensitized to violence. Who are the recipients of this violence? Women!

“And we ask you again, how can you espouse women’s equality and violence?”

Well, as supporters of both women’s equality and  MMA, we take issue with Mendez’s argument. But we know there are plenty of people out there who can speak to the issue far more intelligently than we can, so we called up L.A. Jennings, a feminist scholar who also teaches boxing and jiu-jitsu in Denver, Colorado. A one-time competitive grappler and Sansho fighter, Jennings now concentrates on coaching fighters at Train.Fight.Win., a gym she owns with her husband, and writing a book on the history of women in fighting sports. Come the fall, she’ll be teaching a course on gender and sports for the University of Denver’s Gender and Women’s Studies Department.

Fightland: What were your thoughts when you read the letter?
L.A. Jennings: I think that the argument that MMA is violent and because it’s so violent, violence against women will increase because of it … this is an argument that’s predicated on the idea that women are inherently victims. And when you talk in that sort of language—women are victims, women are passive, women are unable to protect themselves; they’re not in control of their own bodies, their own destinies—it’s a very, very slippery slope. It’s the kind of slope that can really get us into trouble when we then talk about other things we want to happen for women that are good, things like birth control and abortion rights. I think it’s a very difficult argument to make because again it’s positioning women in a way that is problematic.

Most of the academic work out there dealing with women and martial arts is about the link between feminism and self-defense. Which is interesting; it’s kind of 1970s, end of the second wave of feminism. But I’m curious to see how we can use the newer iterations of feminism to talk about what MMA has really done for women, especially in light of the recent developments of the past year. I’m trying to use a newer, third-wave feminism to talk about the competitive aspects of martial arts.

Can you explain that distinction between second- and third-wave feminism as it relates to fighting?
A lot of the talk about self-defense, especially in the 1970s, is predicated on this idea that women are victims, which is the problem I saw with the letter NOW sent to Cuomo. They’re using a dated feminist approach for their argument. Women are victims, women are passive, women need to protect themselves against men … which is true to a certain extent. Self-defense has its place. But when you start talking to people about martial arts and competing as a woman, there’s a bit of a disconnect. When I was competing in Muay Thai, I was interviewed by the local college newspaper and when they did the write-up, they didn’t mention anything about my competitive history or the fact that I was training for a fight; they kept talking about how small I was and how I could kick any guy’s ass who messed with me, which is not why I train. I was training to fight another woman, not to protect myself.

Do these two views—of martial arts as a self-defense tool and martial arts as competitive sport--correspond with the tenets of second- and third-wave feminism?
Definitely. Second-wave feminism is that reaction against the status quo, against men. In some ways it could be seen divisively, which is why so many women nowadays are afraid to call themselves feminists. It brings up this connotation of hating men, which is really not what feminism is about. But the third wave was geared toward trying to find equality for all types of women, regardless of economic status, race, and different cultural aspects. You can’t talk about women in this generalize way, like “all women need to do x, y, and z,” but rather, “here are the conditions which we need to ensure that this woman who is subjugated in Singapore has an option to make her life better.” It’s more about the individual.

But the other thing third-wave feminism does, it talks about having power over your own image, over your own body, and that you’re not completely subjugated to patriarchy, that you can take control of yourself. Which is one of the interesting things about martial arts; it’s such an individualistic act. Whereas if you talk about some other forms of feminism they were practicing back in the 1970s, they were pushing against men in general, whereas the new wave is about trying to make things better for individual women, and the way we as individuals can do the things we want to do without some sort of influence trying to stop us because we are women.

Women’s rights groups have also criticized MMA for comments some fighters have made that make light of, or may even have advocated, violence against women. Don’t those groups have a point?
As a female as a woman who loves MMA, it’s really sad when you have a fighter that you love and you see them make some very stupid and hurtful comments rape and sexual assaults. It’s part of the culture of misogyny, so it is a problem. However, I think that MMA is really uniquely situated to deal with and change the dialogue of these violent comments about women because the sport is not just men anymore. There are men and women competing. And I think that the more women that we have competing, the more fighters are going to be interacting with female fighters as colleagues. With most sports there tends to be a community built around your colleagues, especially in the martial arts world, which is almost like a family, and I think MMA could, in the future, change a lot of that misogynistic dialogue that goes along with fighting sports and a lot of these traditionally male-dominated sports, because there are more women getting involved.

Is the UFC Finally, At Last, dear God, Coming to New York?