MMA Referees Could be Using Instant Replay in 2017 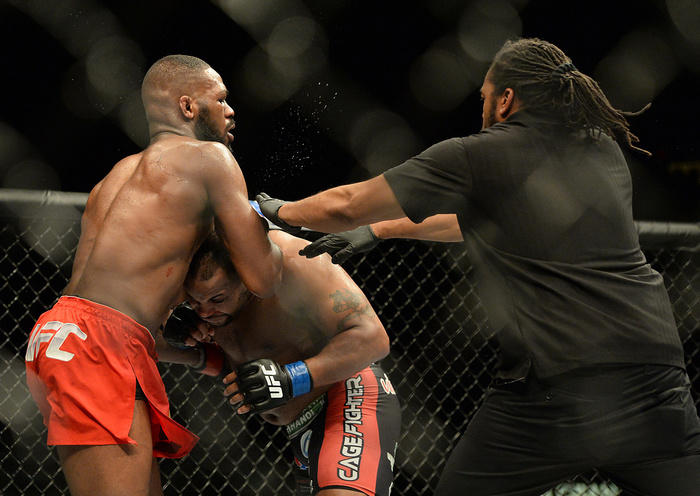 MMA’s Rules and Regulations Committee of The Association of Boxing Commissions and Combative Sports (ABC) has passed the proposed use of instant replay in the event of controversy arising from a “fight ending sequence” among other suggestions which could be considered at the ABC body in the summer.

First reported by BloodyElbow’s Paul Gift, the committee’s proposal passing this stage means it will be considered by ABC President Mike Mazzulli and could then be forwarded on to both executive and medical committees. Then, the use of instant replay will be voted on by ABC members across the country.

ABC members will be convening in Connecticut for their annual conference held between July 24-26—potentially bringing the use of instant replay in MMA to life.

The proposal, which cleared with a vote of 7-0 with one abstention, will see instant replay used as a tool to “either confirm or dispel whether a foul was committed that brought about the fight ending sequence.” As such, the referee could then determine the correct call on the outcome of a fight, including a winner of a fight, having the contest go to the judge’s scorecards for a technical decision, deciding if the fight should be ruled a No Contest, or disqualification.

Only the referee can call for an instant replay following the fight’s end and only if he or she feels what caused the fight to end could have possibly arisen due to a fight ending sequence “caused by an illegal action (foul) whether intentional or unintentional.” The recommendations do not permit the referee to call for a replay in order to restart a fight or see if a fighter had committed a foul earlier on in the contest which did not lead to the fight’s finish.

The full details of this proposal listed below:

The use of Instant Replay in MMA must be set under parameters that insure fairness in the match and a proper outcome at the conclusion of the fight. Instant Replay may not be possible in some smaller shows that are not being videotaped.

Due to the complexities involved in the sport of MMA, the referee may only use Instant Replay when he/she feels that a “Fight Ending Sequence” was possibly caused by an illegal action (foul) whether intentional or unintentional. At such a time the referee and only the referee may call for a review of the last moments of the fight. Once reviewing the replay the referee can either confirm or dispel whether a foul was committed that brought about the fight ending sequence and take the appropriate actions from there.

It should be noted that Instant Replay is not to be used to review the actions of the referee. Examples of this include:

1. Was the fight was stopped at the right moment?

3. Did a fighter commit a foul that did not bring about an end to the fight?

If a referee utilizes instant replay, the information obtained from the replay cannot be used to restart the fight as the fight is officially over and may not be resumed.

The sole purpose of Instant Replay in MMA is to allow the referee to make a correct call on the outcome of the fight in calling:

1. A winner of the match

2. Having the fight go to the judge’s scorecards for a Technical Decision

Chair of the Rules and Regulations Committee, respected US soccer journalist and former Bellator play-by-play commentator Sean Wheelock—along with his team consisting of names like John McCarthy, Randy Couture and Matt Hughes—has already made a significant impact on MMA since assuming his post in 2015—successfully proposing new and enhanced scoring criteria for the judges of the country’s athletic commissions among other rule changes last year.

In addition, the MMA Rules and Regulations Committee also provided clarification for how referees should call a fight in the instance of the loss of a fighter’s bodily functions (vomiting, urine or control of bowels), as well as recommendations for extended usage of technical decisions, and rule changes for hand wrapping and other supportive clothing worn for knees and ankles.

The committee decided to traverse the muddy waters, if you pardon the terminology, of rules surrounding the loss of a fighter’s bodily functions and they are as murky as you could imagine.

According to Gift’s report, the impetus of his rule change was developed when Wheelock presided over a pro-am event in Topeka, Kansas, which saw a fighter—who was clearly winning his bout—vomited over the canvas between the second and third rounds. The fight was called off, but it rankled with Wheelock how he didn’t exactly know the protocol for such a situation.

As a result, the recommendation made by the committee ensures that the loss of one’s bodily functions mid-fight will end the contest and the person responsible would lose by TKO. If it were to happen in between rounds, the ringside physician would assess—if the fighter isn’t cleared to continue, then they would lose the contest by TKO. In addition, any signs of uncontrollable bowels would instantly force the referee to stop the fight: “If fecal matter becomes apparent at any time, the bout shall be halted by the referee and the offending combatant shall lose the contest by TKO.”

It’s dirty work, but someone’s got to do it.