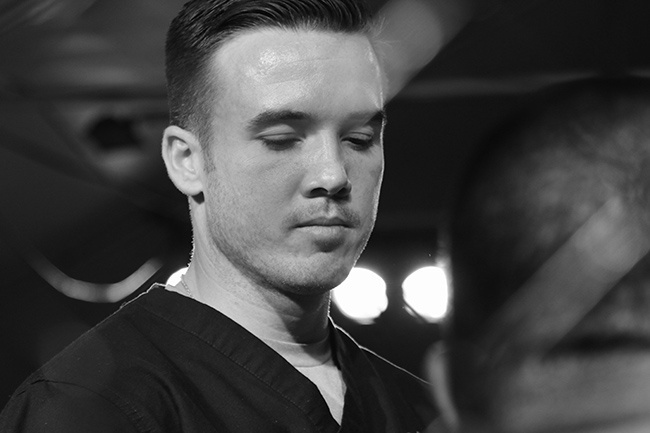 An old friend of mine from childhood named Darragh O’Carroll is now an emergency room doctor. He works at the LAC + USC Medical Center--a level-one trauma center and the single biggest provider of healthcare in Los Angeles, mostly to those “underserved” and without insurance.

At the beginning of the second year of his residency program at the Los Angeles County Emergency Center, Darragh called me and asked if I could help him get a job as a ringside doctor at mixed martial arts events during his time off. I laughed when he told me that after working his long, stressful shifts, he wanted to blow off steam working the cage-fights, but I was happy to help. I put him in touch with my friends at CAMO, the organization that regulates amateur mixed martial arts in California, and within a couple of months Darragh had worked four events. Last week I flew out to L.A. in order to get a better sense of his experience in the emergency room and to find out what it had to do with MMA. 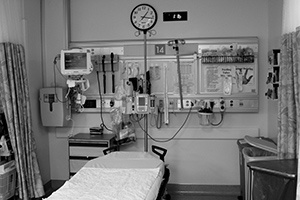 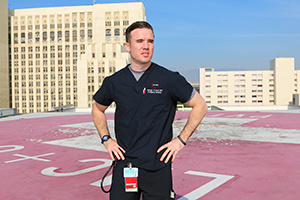 “VICE called us once before, but it was just for information. You’re lucky you know someone on staff.”

My escort is waiting for me with a big smile when I arrive at the emergency room entrance. In order to hang out with Darragh at the hospital and shoot photos, I’m required to have someone from the hospital’s public relations department with me at all times. Darragh is working a 12-hour shift in ER this afternoon and it’s uncharacteristically slow, so as he does his rounds I push him to talk about his new career.

“Anytime we see patients it’s the worst day of their lives,” he says while filling out paperwork in between cases. “The average is somewhere around 8-10 [hours] but our patients sometimes wait up to 30 hours to be seen. I always open up with an apology about the wait. The majority of people are still so grateful to be seen. It really is their last hope.”

The majority of Darragh’s patients have comorbid conditions, like diabetes, cancer, lung disease, or hypertension. There are also a lot of people with untreated mental disorders, many of whom are homeless and in desperate need of long-term healthcare.

“We can hold them for a while, but then they are out again,” Darragh says. “In the 1950s and 6Os they had these long-term, One Flew Over the Cuckoo’s Nest-type places where people were housed. Now they are just running around. I feel terrible for them. Their sense of reality is completely gone, and they have no means to help themselves. We will see them again and again and again. There’s no end to it. There’s no fixing it. You might be able to put your finger on the leak in the levy for a second but they are going to come back.

“Each person you are able to help is some sort of small victory but there’s the overarching stress of the fact that even if I do everything right for this patient, the minute I finish, there will be another patient with just as big of a crisis. Especially in a busy hospital like ours, there is just no end to it. It’s the last line of hope for people and it’s a non-stop constant river. I’m never going to feel like I dammed it up. Your victories get lost in the sea of people. Tomorrow there’s going to be another drunk asshole trying to get pain meds out of me, and there’s going to be another car crash.”

I bring up my reservations about the emotional toll of his occupation, and as we walk into a wing of the hospital where the more critical cases are housed, Darragh attempts to describe what it’s really like.

“To see all of brutality in life and all the worst things that humans can do to themselves and what they do to others, it can be very depressing,” he says. “There is so much suffering out there. The pure scope of what can walk through our doors at any time is scary. It could go two ways: I could become an emotional wreck or I could fight and keep it together. Depending on the day, that is easier said than done.

“The injuries that I identify personally with are the most difficult. It’s human nature to get emotional when you see yourself in someone. Once, this 16 year-old kid came in who was skateboarding and had been skitching--hanging on the back of cars. I don’t know what happened, maybe he got the speed wobbles or hit a rock, but he took a real bad fall. I was thinking, ‘Shit I used to do that. We used to do that.’ He was not responding at all, vomiting through the tube we put down his airway. He has such a bad brain injury that after we ended up securing that airway and getting a CT scan, he passed away in the ER. The first emotion I had when it happened was just to cry. The personal aspect of it is the most difficult to get over.” 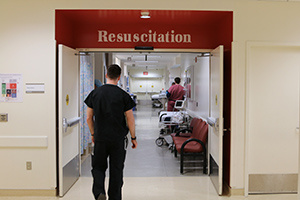 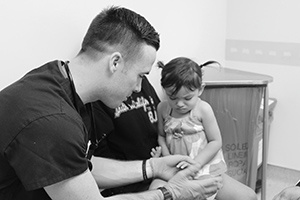 “Eventually I will have to start to learn how to compartmentalize and look at things like a mechanic looks at a car,” Darragh tells me. “Inevitably if I let my emotions get to me I’m fucked and won’t be able to think quickly and objectively. I think this idea of gaining more emotional control is what subconsciously attracted me to mixed martial arts.”

Darragh’s shift is over and we’re driving to the Hollywood Park Casino in Inglewood, where he’s been been assigned to work an event that night called Spar Star. The mid-size amateur show has been set up under a tent on the second-floor balcony of the sketchy casino, overlooking a horseracing track. After an hour of pre-fight evaluations the fights start and Darragh is ringside looking noticeably more relaxed than he had been all day. 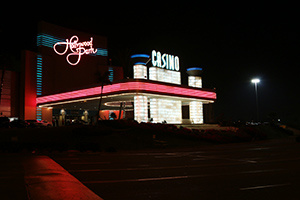 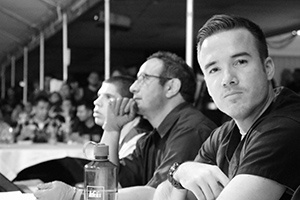 “The martial part of mixed martial arts is sort of cool. Learning how to twist someone’s arm and protect yourself is cool, I guess. But it’s the art part that makes the sport so special,” Darragh says. “This picture of chaos and war and violence, and at the middle of it is peace and technique and strategy. I don’t think it’s happening all the time at the amateur level but the pursuit is there. It’s how I wish to see myself in the emergency room.”

I ask him what he means by that, what meaning he can find in an amateur MMA fight that he can apply to his life as a doctor.

“You can’t make any wise decision in life if you’re angry or scared or anything of that sort,” he says. “It’s what I am learning do to as an ER doctor--taking a deep breath and make the right decision no matter how horrible the situation is. This is the same task of the fighter. To not make emotional decisions. I don’t know anyone who can control his or her emotions while trying to kick someone’s ass. I get that’s what the goal is, but I don’t know how to do that in a complete way yet.”

After a couple of fights go by without a hitch, a fighter gets cut under his eye in the third round. Backstage, Darragh decides to glue it shut with a Dermabond glue-pen instead of giving him stitches. Not too concerned, he holds the cut shut as he tells the fighter that the glue is strong and won’t wash out for a couple weeks. Panicked, the fighter points out that part of his eyelid seems to have been glued shut. Darragh quickly peels it open and tells him he’ll be fine.


“MMA is the ultimate luxury in that healthy people are putting their bodies at risk for the sake of art,” Darragh tells me when the surgery is over. “It’s the counterpoint of those who are fighting in the ER over things they have no control of, like cancer or a car crash. The MMA athlete chooses to participate in a fight for their life. They put themselves in this mock-trail of your fight-or-flight instinct in exchange for the means to practice cultivating emotional control. I have to face fear as a doctor in the same way everyday, but the consequences of my decisions are far more severe. That’s what is so great about MMA: getting that frazzled feeling and having the chance to work through it. It’s a method to work on getting past those dark places that make you want to flee instead of fight. Overload vs. desensitization.”

We watch a few more fights cage-side before two heavyweights enter and we see our first big knockout of the night. Darragh and another ringside doctor, a Harvard-trained cardiologist, rush in to assess the injury. The fighter recovers and the event ends on a positive note. 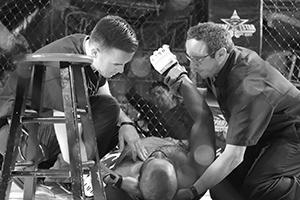 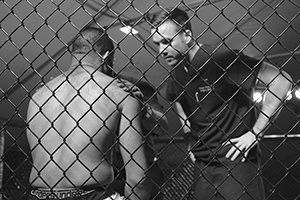 As we leave to go drink pints of Murphy’s at Darragh’s older brother’s downtown bar, The Lash, to drown any remaining emotional demons not already exorcised by the gods of MMA, I ask Darragh why he keeps coming back to MMA and how the sport relates to his life as a doctor.

“In MMA, there is no fleeing because you are in a fucking cage,” he says. “When you are defeated, it’s a total defeat. There is also no fleeing in the ER. It’s final. The finality of it. It’s the terminality and the ending of life or any type of stress to the body in general that is compelling. Yes, there is a spectrum to being beat in the ring and a spectrum to being sick. I am not saying that it is as serious as having someone on your operating table, but the final moments in an MMA match are reminiscent of our fight to save lives in the ER. It’s still just fighting to me at the most basic level.”