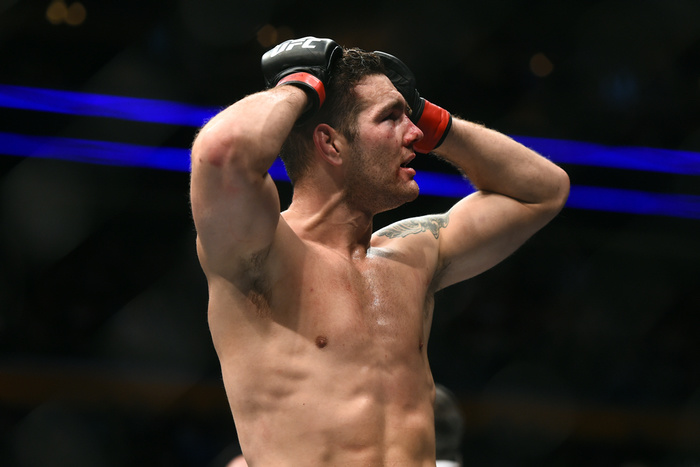 Gegard Mousasi had always been the darling of hardcore fans, but for an unfamiliar viewer a look down Mousasi's record just didn't justify the hype. Over the last few years you could quite easily have come to the conclusion that he is over-rated. His wins are impressive against middling fighters but against top tier opponents he has fallen short. His big victories were over one dimensional kickboxers like Melvin Manhoef, inexperienced prospects like Ovince St. Preux, and freak fights against the grossly out of shape Mark Hunt and a Gary Goodridge who should not have even been allowed to fight anymore. Yet at UFC 210, Gegard Mousasi finally put it together and pulled off the biggest win of his career against Chris Weidman. The conclusion to the fight was not one which left either man satisfied, and really just further reflected the fecklessness of the New York State Athletic Commission, but the action for the best part of two rounds was cracking.

After battering Dan Henderson and Vitor Belfort, Mousasi seems to have come to the realization that fans like a finisher more than a brilliant, cautious technician. From the moment that Weidman showed Mousasi a feint, Mousasi was looking to land the counter right hand. Reminiscent of the Silva – Weidman fights, Weidman feinted early and often to try to take Mousasi's finger off the trigger.

Wrestling has been a problem for Mousasi throughout his career, and Chris Weidman's long, reaching high crotch takedown was a constant annoyance to him in this fight. UFC 210 main eventer, Daniel Cormier, is another man who uses the high crotch / head out single effectively in MMA but there certainly aren't many. The threat of crucifixes, downward elbows, switches, and back takes have to be respected by the man executing the high crotch.

At a couple of points Mousasi found himself in Baret Yoshida's 'higher ground' position, with double overhooks and laying on the back of Weidman's head.

In recent years Baret Yoshida has had remarkable success in snagging crucifixes in high level grappling competition, often by achieving double overhooks from the sprawl and laying on his opponents head with both legs out to one side. Very often Yoshida's opponent will grab at whatever leg they can get and Yoshida will trap the arm and transition to the crucifix. If the opponent goes for this sly bait, Yoshida gets the crucifix. If they do not, he simply maintains a hold of the body lock keeps trying. Even the great Robson Moura found himself scrambling up into a Yoshida crucifix. Of course, Yoshida has spent years practicing from this position and Mousasi likely hasn't, so it is more an interesting thought than anything else.

The Guard and the Passing

The really interesting point in the bout was how Gegard Mousasi's guard shaped up against Chris Weidman's passing. Mousasi has always been good off his back but far too comfortable staying there. In this bout he looked active and mobile: creating scrambles and forcing his way back to his feet. While the takedowns came easy for Weidman, progress on the ground did not. At one point, as Mousasi stumbled and tripped to his back from a clinch, his body immediately coiled into position to deliver that famous upkick when Weidman advanced to claim top position. Anyone who trains for Mousasi has to keep this strike in mind, which says something of Mousasi's ability with it that it remains a threat even under the Unified Rules of MMA.

Here's a look at how active Mousasi's inside hooks were from his guard. Mousasi begins elevating Weidman, underhooks a leg in order to transition to an x-guard or stand up sweep, finds himself in a front headlock and finally fights his way back to standing within moments of hitting the mat.

In this peculiar sequence Weidman begins to walk over Mousasi's left butterfly hook, clearing the knee, but Mousasi is able to use that knee to elevate Weidman and create a scramble.

Later in the bout Weidman began looking for a folding pass, attempting to palm Mousasi's knee past his centreline then smash his chest down on it to bring Mousasi's knees to together, flat on the mat.

Here Mousasi elevates Weidman, resets his hips in front of his opponent, and regains double underhooks.

After several attempts, Weidman was able to flatten Mousasi's hooks underneath his body. From here some grapplers prefer to use a windscreen wiper to pin the legs as they scarper around to the opposite side. Weidman, however, began crawling up towards mount and consolidated the position. A gorgeous pass against what had proven to be a tricky and creative guard.

Mousasi conceded his back, kicking one leg out behind him and grabbing and clawing at Weidman's leg in an attempt to get Weidman to slip off his back, ultimately he was successful in this and during the scramble he was able to return to his feet once again, evading what could have been disaster.

Weidman began to slow from the effort of taking Mousasi down and failed to do damage on the ground. Disappointing in this bout was Weidman's striking. Against his first orthodox opponent in five years, Weidman looked awkward. He threw long, naked, right kicks which were met with easy counter punches that sent Weidman off balance.

We discussed kicking into the open side when previewing Rumble vs Cormier II last week. In that fight, just as in the first, it proved to be incredibly important. Johnson snuck in a knee and kicked Cormier in the face as he had the natural reaction to duck down into the open side to avoid punishment behind his shoulder at back.

Kicking into the closed side is tougher because even a blow the opponent doesn't see coming can just hit their back and shoulder, and even if it lands it has a great chance of winding up underneath their arm while a right hand comes back.

When Weidman threw his right hand he was reckless and threw himself off balance.

And this ultimately got him caught with a counter while out of position at the opening of the second round.

While covering up along the fence is generally something we examine as a negative, Weidman has shown that he can do it better than most, as against Vitor Belfort. Moving his head, rotating his elbows to block the path of uppercuts and knees, and keeping his chin pinned to his sternum to take the blows on the top of his head: Weidman's covering up is an example of the best way to do a bad thing and it helped him weather the storm against Mousasi as he had against Belfort.

Slightly concerning was Weidman's stiff fingered drives towards Mousasi's face which went overlooked by the referee.

Mousasi was starting to heat up. His disdainful, non-commital jab, thrown as if his fist had stepped in something nasty. He was finally able to flick out this jab and sprawl on Weidman's shots effectively as the American slowed down. Unfortunately the fight was promptly struck down by miscommunications in officiating. Mousasi landed what is now mostly agreed to be a legal knee under the new rules (which have been a cause of confusion for the last few events based on whether the commission has accepted them), but New York State Athletic Commission does not allow referees to review tape for reasons it doesn't seem able to explain.

So Weidman got five minutes to recover, then the strike was declared legal, then he was allowed to recover some more, then the doctor declared him unfit to fight. It was a unsatisfactory ending to what was proving to be a great middleweight tilt and a reminder that the NYSAC has just not got the hang of this yet at all.

While Mousasi looked the best he has to date, and picked up the biggest name of his career, it feels as though we were robbed of the actual conclusion of the bout. There is talk of a do-over, but others desire to see Mousasi moving on to better things. The saddest thing to think about coming out of this thoroughly entertaining, technical scrap is that while the UFC scrambles to create Michael Bisping led money fights out of thin air, the heap of talent which is suddenly swimming in the middleweight top ten just has to pass the time.