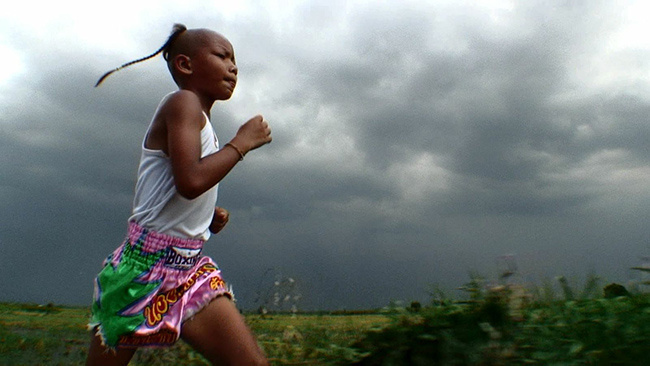 Imagine Mr. and Mrs. Jones or Smith from Illinois or New Hampshire are manicuring their Facebook page and selecting a great photo of their 8-year-old daughter knocking out another girl with a punch to the face as a frenzied mob of gamblers looks on. “Sally wins in first round,” the caption reads. “Mommy and Daddy are gonna get a new car after all.”

To many in the civilized West, the thought of making a living off your kid’s fighting career would seem repulsive. Not so in rural Thailand. What Americans perceive as child abuse is a legitimate way out of poverty for Thai families. In a culture where economic conditions too often force parents to sell their children into sexual slavery, a kid who can earn money from Muay Thai is a blessing.

In his new film Buffalo Girls, which screened at last year's Slamdance Film Festival, American documentarian Todd Kellstein follows two of these young female fighters as they prepare for a national Muay Thai championship and the chance to pull their families out of poverty. Kellstein had originally travelled to Thailand in pursuit of a story about prisons granting early releases to inmate Muay Thai fighters, but that story turned out to be a dead end. Instead, Todd stumbled upon a match between a couple of 7-year-old girls in a rural village. After working his way through the throng of gamblers, Todd approached one of the young fighters and asked why she was fighting. Her simple answer spoke volumes about the disconnect between American and Thai notions of childhood. “Money,” she said. She was fighting for money.

Muay Thai is the national sport of Thailand. Initially devised as a last line of national defense, Muay Thai is the equivalent of America’s well-regulated militia. If every Thai could practice deadly Muay Thai, the theory goes, there would always be a way to defend the homeland, even if external pressures dried up any supply of swords and arrows.

In Muay Thai, limbs become weapons. A strike-based art that eschews grappling, Muay Thai is synonymous with Thai nationalism. In a country that outlaws casinos and other forms of gambling, betting on Muay Thai remains a popular and legal pastime. It is not uncommon for boys to begin training and competing in Muay Thai as early as age 4. When I talked to him a few days ago, Kellstein compared Muay Thai in Thailand to hockey in Canada: Every kid knows how to do it.

Still, it wasn’t until the late 1990’s that promoter Cho Insuwan saw an opportunity to challenge the stereotype of the highly submissive Thai woman and let the fairer sex fight. While women practiced Muay Thai alongside men in ancient times, recent history has seen females forbidden from even touching the ring.

When Kellstein first set out to make a film about young girls fighting for money, he thought he was making a call-to-action movie that would raise awareness and maybe put a stop to an “abuse.” Today he’s a convert who says, “The more you know about Thai culture the more you see the necessity of these fights.” The anger he originally felt toward the parents of these fighters has become anger at an inequitable economic system that has left those parents no option but to make their children fight. Kellstein says the MMA community has been uniquely sympathetic to his story about two girls helping their families survive and striking a blow for Thai women, but the wider audience in the West has thus far failed to appreciate how first reactions to different cultures can sometimes be misguided.

Muay Thai in the Rockaways Fights Back

This Is Spardha: Ancient Monastic Wrestling and the Rise of Indian MMA