Muay Thai Is Granted Provisional Recognition as an Olympic Sport 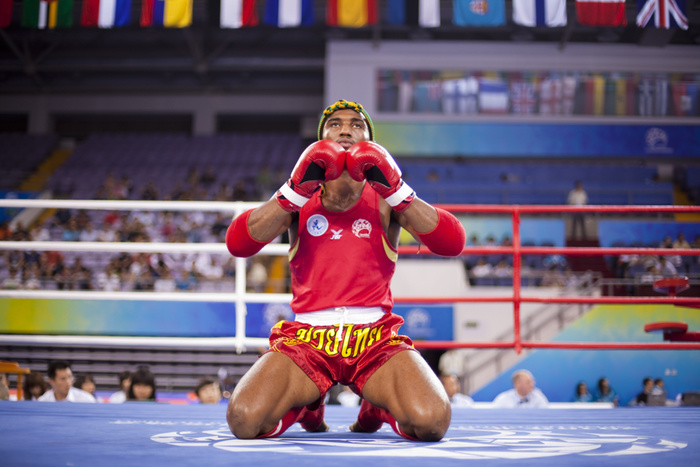 A few days after the Summer Olympics in Rio de Janeiro ended with a three-hour extravaganza of laser lights, wild sparkling costumes, and samba music on August 21, the hangover set in for the television network that had broadcast them, NBC. Primetime viewership was down 17 percent from four years earlier, when the Games had taken place in London, and viewership among 18-to-45-year-olds, the demographic most coveted by advertisers, had plummeted by a full quarter, 25%, from 2012. It was nightmare scenario for the network, which had paid $12 billion to host the Games until 2032, though one foreseen by NBC Universal CEO Steve Burke. Speaking at a conference in June Burke said, “[M]y prediction would be that millennials had been in a Facebook bubble or a Snapchat bubble and the Olympics have come, and they didn't know it." In other words, pay no attention to NBC’s maudlin coverage or their bizarre decision not to broadcast many marquee events live—blame the kids and their gadgets for those lousy ratings

But hope springs eternal, especially in advertising, and Olympic officials are already hard at work finding a way to win those kids back. Earlier this year the International Olympic Committee voted to include five new sports designed to woo 18-to-45-year-olds at the 2020 Games in Tokyo, including skateboarding, surfing, and sport climbing. “Taken together, the five sports are an innovative combination of established and emerging, youth-focused events that are popular in Japan and will add to the legacy of the Tokyo Games,” IOC President Thomas Bach said at the time. “We want to take sport to the youth. With the many options that young people have, we cannot expect any more that they will come automatically to us.”

Yesterday the IOC executive board went even further, voting to provisionally recognize cheerleading and Muay Thai. This provisional recognition period runs three years, during which time committee executives can vote to fully recognize those sports, leaving them free to petition for inclusion in the Olympic Games.

Muay Thai, our Muay Thai, the Art of Eight Limbs, foundational element of mixed martial arts, sine qua non of the 21st century’s most important athletic revolution, could very soon be in the Summer Olympics, on NBC no less, alongside the long jump and the 100-meter dash and the 50-meter backstroke and synchronized swimming and rhythmic gymnastics and, yes, even competitive cheerleading—all those gentle, genteel, sympathetic sports your parents fall in love with for exactly two weeks every four years and then promptly forget about.

It’s a bizarre thought. And one wonders if the IOC knows what it’s getting itself into. After all, for all its athleticism and elegance Muay Thai is arguably the most brutal martial art not dreamed up by Russian television executives. Leg kicks routinely leave competitors barely able to stand. Body kicks blast kidneys and livers with a sickening thud. Elbows tear flesh and spill blood. And then there are the knees to the head of a fighter caught in his opponent’s clinch: Sometimes such moments can be too much to bear for even an experienced Muay Thai lover. What will happen the first time a part-time, casual, suburban Olympics fan raised on gymnastic floor routines and dressage and the point-based delicacies of taekwondo witnesses a head-kick knockout or repeated knees to the head? Gasps will be audible, children will rushed out of rooms, innumerable phone calls will be made, protests and boycotts will be organized, hand-wringing editorials will be written, and general horror will be felt in all corners. Advertisers will swoon!

So, as excited as I would be to see Muay Thai in the Olympics, I just don’t buy it. Either the IOC or NBC will recoil in horror at the first broken nose (not to mention the first news reports about impoverished 8-year-old professional fighters in Thailand) and call the whole thing off, or they’ll water the sport down with so many rules and regulations and civilizing agents to make it palatable that Muay Thai will lose its very essence: yet another murderous art form reduced to the delicacies of a tea ceremony.

But it’s fine. Even if Muay Thai never makes it to the Olympics, the kids will still have surfing and skateboarding and rock-climbing to distract them from their Facebook pages and sexting for a few weeks every fourth summer. True, Muay Thai will probably be too awful for them and their parents and their grandparents, but they were always going to be more comfortable with the neck-breaking suburban nationalistic frenzy of competitive cheerleading anyway.

When Manchester Was Mecca for Muay Thai