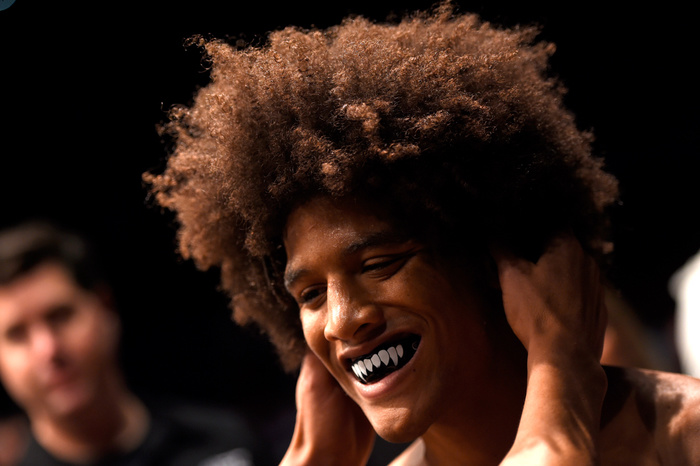 In today’s My First Fight, we talk to Alex “Bruce Leeroy” Caceres about the pure, childish joy that he felt when he first watched the man who became his namesake, and how he’s trying to recapture that feeling now.

If there’s anyone else in the UFC who can come close to Alex Caceres’s innovative and idiosyncratic style, it’s the equally flashy and unpredictable Yair Rodríguez. So the two will pose a unique challenge to each other when their bout headlines UFC Fight Night this Saturday in Salt Lake City, Utah.

As far as Caceres is concerned, the similarity in styles should work in his favor. First of all, he’s used to facing people with similar mindsets and training backgrounds. “There’s lots of people that I have at my gym that can give me that look and that are similar to me as well,” he tells Fightland. “I come from a gym in Miami where it’s highly striking-oriented and there’s a lot of flash in the techniques. My coach is also one of those guys, so I’m kind of used to those kind of looks.”

He also brings up his early 2014 victory over Sergio Pettis as an example of what he can do with a unique striker. “[He] was another Taekwondo expert that I fought, and he was very fast, explosive, and would throw flash every once in a while. Not necessarily as much as Yair would, or as crafty as he would. I wouldn’t say that I’ve faced anybody like Yair Rodríguez, but [I’ve faced] people that were close or similar.” 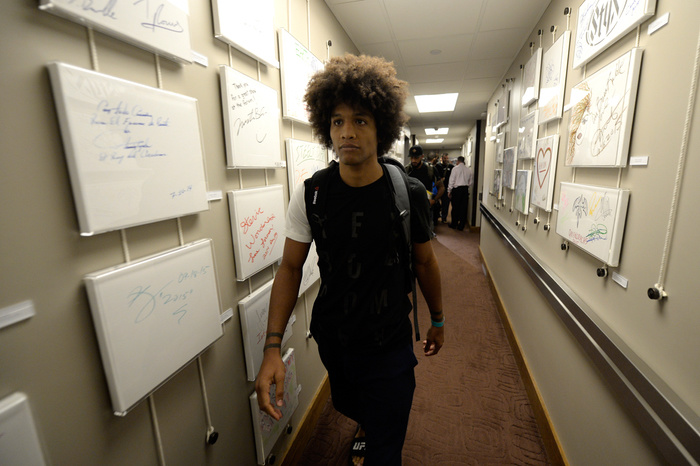 Caceres believes that the opponent or training partner who has most helped him get ready for this particular fight, though, is the man in the mirror. “When I train I tend to think about if I had to fight myself. How would I prepare for myself? What would I do? So I always try to look introspectively into myself and see the holes and faults that I might have, so an opponent like Yair I have been preparing for my whole life.”

From that perspective, Caceres’s first fight was also the moment when he started training for Rodríguez. So we ask him to pinpoint that moment.

He starts describing the beginning of his mixed martial arts training but pauses mid-sentence. “Actually,” he says. “I would have to go way further than that. Once I saw my first Bruce Lee film, I felt that training martial arts was something that I wanted to do.”

If the future Bruce Leeroy had come from a more privileged background, this story might end with the 6-year-old Kung Fu convert immediately signing up for lessons. But, without the funds to do so, he had to wait and search for the right opportunity. “I didn’t come from a very affluent family so I didn’t have a chance to be enrolled into a martial gym,” he explains.

It wasn’t until he was 14 that he was able to find a gym that allowed him to start training for free. In the meantime, he continued to watch films starring his new heroes like Lee, Jackie Chan, and Donnie Yen, and tried to teach himself based on their performances.

He believes that inspiration still benefits him today. “I use a lot of it in my combat skills. Of course, in a real fight and against skilled opponents, the application might be different, but I use things from double punches to 360 kicks and sweep kicks and whatnot in fights. The biggest influence that comes from that is using no limitation as limitation. They’re very free-form. However which way you can, and however your body moves, move it naturally and just let it flow.”

Caceres isn’t just revisiting this time in his life for the technical lessons that it can teach him, though. He’s also interested in the philosophical benefits of looking back on the uninhibited joy and lightness that came with his martial arts film fandom and is consciously trying to bring some of that childhood innocence to his current career. “I wasn’t necessarily approaching martial arts the way that I used to,” he says of his 2014-2015 losing streak. “But [now] I’m approaching life the way I used to as a child, as in nothing is that serious. Especially something like fighting in the UFC,” he muses.

“It’s a great thing. It’s a great job. And that’s what it is: it’s a great way that I can make revenue, so that I can continue to train every single day without having to worry about the basic necessities of life. But, as a child, we tend not to worry or put so much importance on anything. We’re very lighthearted as children. It’s easier for us to make friends, talk to people, and be ourselves. I feel like, as we grow older, we start trying to fit a mold in order for people around us to able to accept us. But, in the long run we find out that it’s a lot more important… when it’s too late, we find out that it’s much more important that we accept ourselves.

“I’d rather just accept myself instead of being this cookie cutter mold of what a fighter is supposed to be, how aggressive a fighter is supposed to be, and how serious fights are supposed to be because, in reality, it is not that serious. I mean, life is not that serious. Why worry about life so much and why take it so seriously? It’s not like we can get out of life, anyway. There’s tons of things that are way more important than this. Treating people nicer. Being kind. Raising children. All that sort of stuff. There’s so many more things that we could be doing with our lives that have much more importance than us stressing over the next fight.”