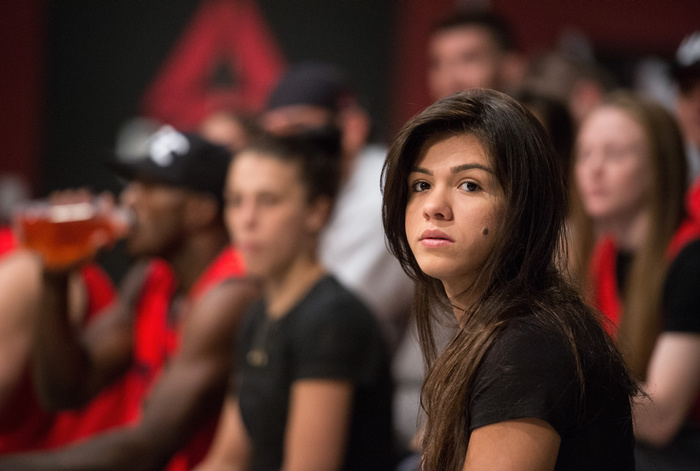 In today’s My First Fight, we talk to Cláudia Gadelha, who faces Joanna Jędrzejczyk for the second time as part of The Ultimate Fighter 23 Finale on July 8 in Las Vegas, about the cancelled bout that changed her destiny.

Current women’s strawweight champion Joanna Jędrzejczyk may have intimidated, confused, and completely psyched out a large swath of her division over the course of her two years in the UFC, but that doesn’t bother the number one contender.

It’s not that Cláudia Gadelha isn’t impressed, at least on a clinical level, by Jędrzejczyk’s facility for psychological warfare. It is, in fact, one of the few skills she’s willing to attribute to her forthcoming opponent. “I think she’s a striker that defends some takedowns well and plays mind games,” she tells Fightland. “That’s it.”

She simply refuses to be noticeably shaken by anything that the champ has thrown at her. both literally and figuratively, over the course of their acrimonious history together. Save for the occasional moment of off-camera retaliation, nothing in their first fight against each other in December, 2014—where the future champ squeaked by Gadelha with a contentious split decision victory—their six dramatic weeks as opposing coaches in latest season of The Ultimate Fighter, or the ensuing publicity rounds has elicited much more than a smirk from the challenger.

“The psychological game is part of Joanna’s thing,” Gadelha muses. “She’s not only a striker, but she’s also someone who tries to get in her opponent’s head and she did that pretty well with pretty much all of her opponents. But not me. I’ve been through a lot of things in my life to be here today and it’s not a goal that came up from nowhere. It’s not her that will get in my mind now. I’m very strong in my mind. Very strong. I’m ready for anything.”

It’s not going to be easy for anyone to get into her head when it has, arguably, been in the game even longer than she has.

Claudia Gadelha knew that she was a fighter long before she started training. She even tried to take her first match before she’d had a single lesson in any martial art whatsoever.

“I went to an MMA show in my city, and it was going to have a female MMA fight but one of the fighters didn’t show up and [the fight] wasn’t going to happen. So I showed up and said ‘I’ll fight her!’” she recalls. “The girl was a black belt, two degrees. She had, like, six MMA fights, high level. And I wasn’t anything. I hadn’t even trained in my life, but I said I’d fight her.”

The other fighter’s coach took one look at the determined and muscular teenager and tried to shut her down politely. “I have always like to work out since I was very, very young, and I always had a fit body. When he looked at me, he said ‘No, I’m not going to let you do that. But if you want to train, go to my gym.’”

That coach was Jair Lourenço, and his gym was Kimura Nova União' in Natal, a city too far away to allow the young Gadelha to make daily commutes. But she was not about to give up that easily.

“I convinced my Dad to rent an apartment in another city to go live there, study and train there,” she says.

So she relocated to Natal and took Lourenço up on his casually extended offer, a move that stunned her soon-to-be coach. “He couldn’t even believe it. He said ‘You really came.’ I said ‘Yeah. I did. And I want to do this.’”

On the mats, she flourished. “In two months, I started competing and I was state champion. In eight months, I was a BJJ national champion. And in a year, I was BJJ world champion.”

Her financial circumstances made her far more of an underdog in the outside world, but a young woman who was once ready to step into the cage with no preparation refused to give up, no matter how hard the circumstances. Fighting, she had realized, was her destiny. And if she had to fight for the very opportunity to fight, then so be it. “I’m from a city that doesn’t give you a lot of opportunities in life,” she explains. “It was very complicated, because I didn’t have the money to do it, and it was very expensive to pay for competitions and things like that. So I had to fight hard for my dream. I wanted to be a fighter, and I fought to be a fighter. I think that was inside me since I was 15 years old.”

Twelve years later, as Gadelha begins to reap the rewards of her battles on both sides of the Octagon, it’s easy to see why a few flying words and bottles wouldn’t be enough to scare her.