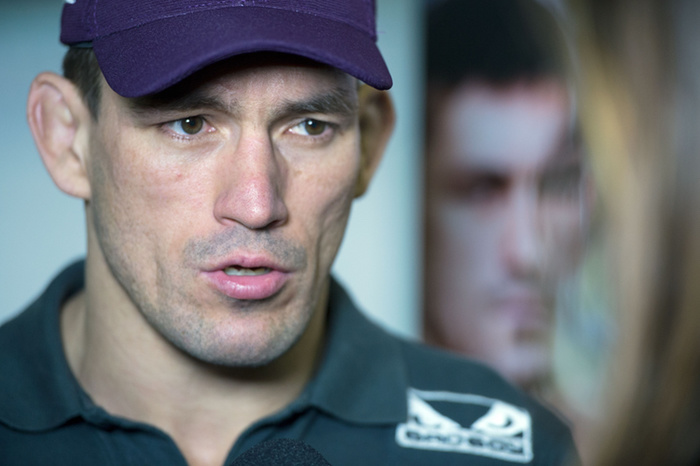 In today’s My First Fight, we talk to Demian Maia, who will face Carlos Condit at UFC on Fox 21 in Vancouver, Canada on August 27, about his third, fourth, and fifth professional MMA fights.

“There were many moments like that,” Demian Maia, the Brazilian jiu jitsu master who puts the art in mixed martial arts more than most, muses when asked what he would consider his first fight. But he didn’t truly realize that MMA was the right path for him until he was already on it.

The night that changed everything was October 7, 2006. The event was the SCI Super Challenge 1 in Sao Paolo, Brazil. Maia was entered in an eight man tournament on the card and the conditions of those brackets were far from ideal for him. To win, he’d have to fight three times. His first match would be at midnight, followed with bouts around 2am and 4am. And although he had some and MMA experience and two finishes on his short but perfect record at that point, all of his opponents had more.

“I was the underdog for that. It was much more experienced guys,” Maia says of the competition. “And I won.”

Maia submitted Vitelmo Kubis Bandeira with a rear naked choke. He then bested Gustavo Machado by unanimous decision two hours later. And, in the main event, he defeated Fabio Nascimento via guillotine choke just 35 seconds into the first round.

His performance that night was impressive, but it was how he felt, not what he did, that made him recognize that he was a true mixed martial artist. “I realized how calm I was, especially because the men that I was fighting, they were better than me at MMA. They had more experience, and I was really cool and calm,” he recalls. “After that last one at 4 in the morning, I came back home and I realized that ‘OK. I’m good out there. I can start to do this as a career.’”

As far as he is concerned, his psychological skills might just be the most important component of his game. “MMA is pretty tough on your mind because it’s a sport that’s not just about winning. You really want to win bad, but it’s tough when you lose. You get beaten. And it really messes with your ego, because nobody wants to get beaten by other people physically. It’s not just a game. You get beaten physically. There is a big risk of cuts and some nasty injuries,” Maia, who has faced his fair share of career-threatening staph infections and injuries, explains. “So everything together makes this sport really tough and really mental.”

Like every other part of his body, Maia continues to train and challenge his brain. “I think that’s something that you’re always developing. I always work on that because you need to work all the time and everybody gets really nervous and everybody gets afraid when there’s a big challenge. I’ve been working on that since [those fights].”

(For what it’s worth, Maia doesn’t believe that Carlos Condit’s recent claim that he “plays it safe” in fights was an attempt to throw him off that mental game and force him to try something rash during their forthcoming fight. And he’s actually quite philosophical about the charge. “He’s not totally wrong. Everybody wants to win, everybody. I’m a very competitive type, so I want to win the fight first of everything. So sometimes, in some situations, you’ve got to be safe. MMA’s not like a game like basketball, for example, that if you’re winning by 30, 40 points and there’s just five minutes left, you can do whatever you want because the guy isn’t going to beat you. In MMA, you can get beaten in the last minute of the fight, or the last second of the fight, so sometimes you’ve got to be safe. You don’t want to be stupid just to throw all of your cares and all of your training away. But I think in the last fight, I got more risky. I’m changing my game every day.”)

A much as he continues to hone what he first noticed that night in Sao Paolo a decade ago, though, he thinks he also discovered something in those fights that can’t be taught. “That day, I realized that, even though it was the third time that I was going to fight MMA, that I had something inside me. Something innate. There was something with me that me not freak out, and that was a good start. I thought ‘I can work from here.’ From this point, it would be easy, because I already had something that was born with me, that made me calm and cool and able to handle this very stressful situation.”