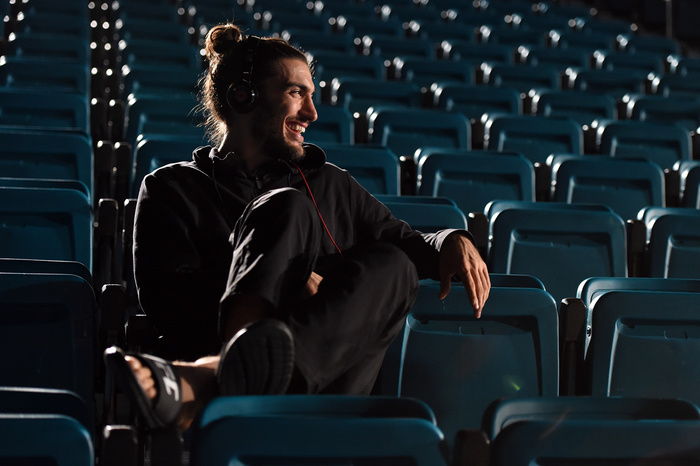 In today’s My First Fight, UFC middleweight and The Ultimate Fighter Nations: Canada vs. Australia champ Elias Theodorou tells us about a pair of ill-advised brawls that eventually turned him into a respectable professional fighter. It turns out that The Spartan, who is currently engaged in amusing war or words, hair, and video with Sam Alvey (the pair will face off against each other at UFC Fight Night Ottawa on June 18) started entertaining people with his fighting, wit, and misadventures long before he joined the UFC. In fact, he first became “famous” for fighting long before he’d started any sort of combat training at all.

Here is his story, in his own words:

My first high school fight is kind of what got me into this.

It was Grade 10. A group of us used to always walk home together. A couple guys, a couple girls. Along the way, an acquaintance of ours started throwing snowballs at us, playfully, and we started throwing back. I played baseball for many years, so I’ve got a mean right throw. Mine landed on his face a bunch of times, and that really got him upset.

He came rushing at me—and I still thought we were playing around—and then he just grabbed me and threw me on the ground, and started to attack me. I just kind of laughed, [the way you do] when someone does something you don’t really expect, and then one of the girls I was walking with said “Hey, stop it!” And then he went around and kind of smacked her.

At that point, shit’s getting real, so I got up and I kind of pushed him and stopped the situation. I told him he shouldn’t do that, and we ended up going our way and walking home. I thought, at this point, that was it.

He had a couple of older cousins in school. And they confronted me after school the next day and they tried to get me to fight. I kept on saying I didn’t want to fight, that basically the issue was done, whatever. There was probably half of the school around at this point. This was right after school, and all of the cliques were there. All of the different cliques.

So, long story short, I tried to walk away and as I was walking away, the big cousin pulled me back, sucker punched me, and threw me into his cousin. His cousin swung, I ducked, I grabbed him and I essentially jersied him, uppercut him and slapped him around. I unleashed about 15, 20 punches on his face and completely obliterated him. The older cousin was now going to attack me and then a bunch of my friends’ older brothers stopped it and then it became a big fight. It became this big, crazy thing. Eventually it calmed down and got broken up.

I thought nothing of it. I had a little bit of a shiner. I kind of laughed it off, or whatever, and went home.

That was a Friday. Fast track to the Monday... it turns out a bunch of people filmed it and that everyone saw me beat him to a pulp, just totally wrecking the dude. From there I was—I’m doing air quotes now—“The Cool Kid In School.” I didn’t start fights, but I finished them. Throw in a little arrogance in between and whatnot and that kind of carried on through my high school career, with no actual training or anything like that.

In my first year of university, [my friends and I] all come back and go to the local watering hole, and we’re all having a good time. I’ve had a couple of drinks and I picked a fight with someone that I shouldn’t have… because he was completely sober. I didn’t know that.

He was trying to pick a fight with one of my friends. I kind of knocked over his drink, we all got kicked out of the bar. We started to fight. I wanted to try a Superman punch, which was not well advised. I fell and he kicked me in the face right when I was on the ground. I got up and ripped off my shirt. He jumped in a cab. I jumped on top of the cab and then the cab driver freaked out and drove off. I fell off the top of the cab. I landed on my back and, next thing I know, I woke up in my bed.

So I woke up, I kind of pieced it together. I looked in the mirror and thought “Oh, I’m fine. OK. Whatever.” I went to work at Foot Locker and I was telling the story, piecing it together with my coworkers, making a grandiose speech about it. Then someone came in and went “Hey man, are you OK?”

This was 2008, when YouTube is starting to become a thing. I [looked up the video] and it was labeled “Boot To Face.” Someone filmed it on a cell phone camera and it was me, obviously obliterated, trying to do a Superman punch. I slipped. I fell. I got kicked in the face.

And I was mortified because, at this point, there were 5,000 people that had seen it. And then it became more popular. I think it ended up getting 100,000 views. I was mortified.

I got into fighting because I was The Cool Kid At School, and now I’m embarrassed, especially because we were all coming back to our high school group and blah, blah, blah.

In my moment of despair, I talked to my father. I was like “Dad. I got my ass kicked and it’s on TV. What should I do?”

He went “Make sure it never happens again.”

The rest is history.