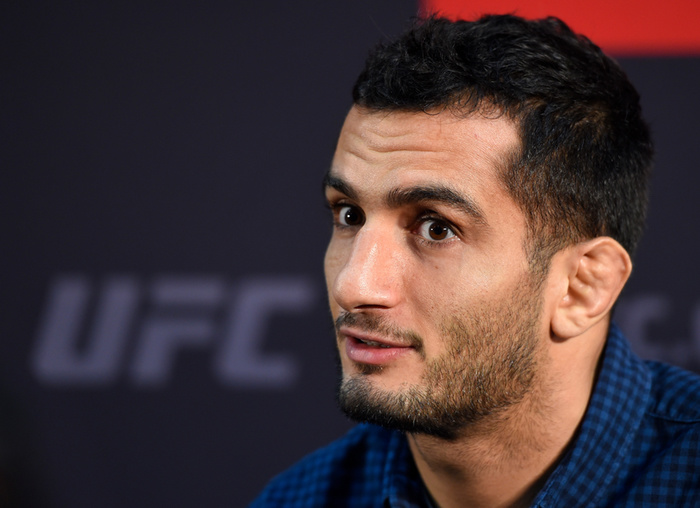 In today’s My First Fight, we talk to a very hungry and tired Gegard “The Dream Catcher” Mousasi about the series of events that led to him facing Vitor Belfort at UFC 204 this Saturday, October 8 in Manchester, England.

Fight week can be a volatile time in the psyche of a fighter. The hard work in the gym is done, but the weight cut isn’t quite finished yet. They’re tired. They’re hungry. There’s little to do but sit and sweat and think about that hunger, either in the figurative sense (a desire for the win and for the next step in your career that can come along with it) or the literal one (because you are literally starving).

All of which makes it an interesting time to ask a fighter to reflect back on their past and recall the first moments that paved the way for all of the torture they’re voluntarily enduring in the name of a combat career. If you get a fighter in a happier or more fired up moment, this can lead to an impassioned story about past thrills and current goals and destiny. But if you catch someone at a less excited moment, it might just inadvertently inspire some ambivalent reflections and idle fantasies about a life of leisure.

Gegard Mousasi wasn’t quite miserable—or even particularly hangry—when we talked to him three days before his fight against former Light Heavyweight Champion Vitor Belfort at UFC 204. But it would be fair to say that he was definitely bemused when we asked him to look back on what he might consider the moment that made him realize that he wanted to be a fighter.

“There was one time, my friend wanted to beat up some guy, some kid in his school,” the former DREAM and Strikeforce champ told Fightland. “So we beat him up and, after that, we decided to go to boxing because we thought we were tough.”

And how did that first fight play out?

“It was two of us against one, so...” Mousasi started before breaking into a wry laugh. “We just went and threw him on the ground and my friend kicked him in the stomach and we went home. We decided to go to boxing because… I don’t know, when you’re young and stupid, you do those things.”

Mousasi, who was 15 at the time, started to eye more serious ends than schoolyard retribution once he started training. “After doing boxing a little bit, I knew that I wanted to achieve what the other boxers were achieving: the championship and whatever comes with the championships.”

His first step toward that goal was to face someone in proper competition, without any backup. And that first one-on-one fight ended up being even more successful than the beatdown he’d executed with his buddy. “I won very quickly. It motivated me to continue.”

When we asked if that win and other victories like it continued to motivate him to this day, Mousasi turned philosophical. “Yeah. Unfortunately. That’s what we do.”

“Yeah, it’s not great,” he mused. “Let’s say that I would have preferred to be doing something different, but it is what it is.”

Did he have another specific career in mind?

“Being rich and fat and lazy!” he replied.

Upon further reflection, he was willing to admit that being two days away from weigh-ins was probably influencing his answers. “Maybe because it’s fight week. I’m a little bit grumpy. The last week is when you get tired of everything. That’s when you’ve done your work and you’re just miserable. Hungry. You know you’ve done your work. Then it’s just the weight cutting and the actual fight.  Hopefully after this fight, we get the victory and then it’s back to ‘When is the next fight?’ Once you go through the training camp, you think ‘When is it finished?’ But that’s the cycle every time you go through.” 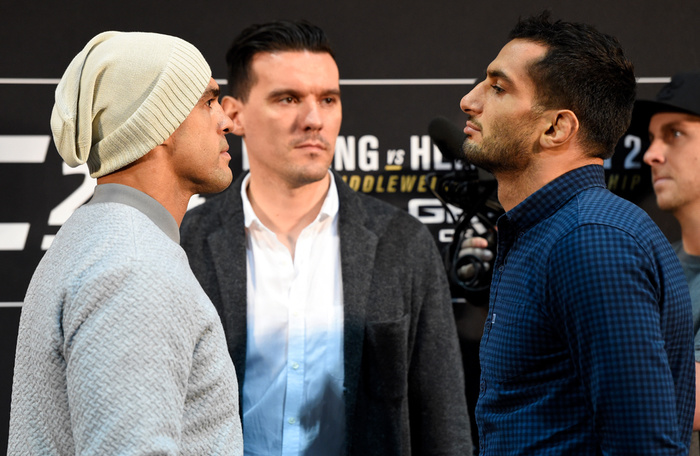 Although it’s wasn’t quite as appealing to his empty stomach as a life of well-funded indulgence, Mousasi did admit that his fight against Belfort was another dream come true of sorts. He’s been gunning for his fellow MMA veteran for years now, and he’s looking forward to finally stepping into the cage with him. “I actually think very highly of him,” he insisted. “It doesn’t sound in the interviews like I think very highly of him, but I do, and that’s why I know I’m going to perform better than I usually do. Whenever I’ve felt that there was a lot of pressure on me. I perform at my best.”

Mousasi went on to predict that he’d finish Belfort “within two rounds,” but he also offered this somewhat less than enthusiastic meditation on winning: “I suppose if you don’t get the victory, your work has been for nothing so... you need the victory to feel satisfied about all of the things that you have to do or not do for the fight.”

And he was not interested in any perky notions about the benefits or lessons that one can learn from a loss. “Not at this stage of my career. I can’t afford to lose.”

Mousasi may have lost most of the youthful arrogance, vigor, and enthusiasm that came with that first fight with his friend 16 years ago. But there’s at least one thing that hasn’t changed since he learned to fight for himself: he’s still willing to get the job done.

“It’s a fair fight,” he said, comparing it to that first-ever scrap. “We both trained for it. It’s not like a dog fight, or animal cruelty. And it’s still not a lot of fun going into the cage, but it’s someone that chooses to go in and we chose to fight each other. So we’re going to do that.”