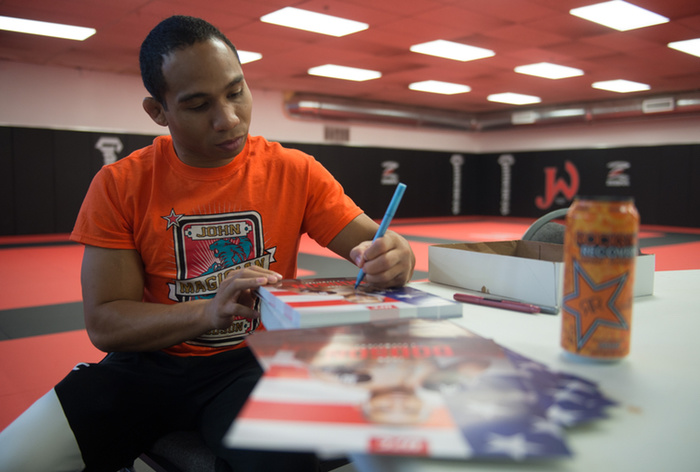 In today’s My First Fight, we talk to The Ultimate Fighter 14 winner and current UFC bantamweight/flyweight/whatever other division you ask him to fight in-weight John “The Magician” Dodson, who faces John Lineker in the headlining match of UFC Fight Night 96 on October 1, in Portland, Oregon, about his first day of training with the legendary Greg Jackson.

John Dodson may have been a highly decorated wrestler in high school. A two-time state, one-time runner-up and four time district champion, in fact, so well known and loved in his home state of New Mexico that longtime Greg Jackson associate Chris Luttrell knew exactly who he was when he found him working at a Chuck E. Cheese's in the early days of the millennium. But the future Magician didn’t think of himself as a fighter.

At best, he might have considered himself a sort of real life Donatello, his favorite character from his beloved Teenage Mutant Ninja Turtles. “I was a nerdy dude in school who liked anime and was designing robots and computer programs and always wanted the new technology but could actually beat people up if necessary,” he tells Fightland.

Unlike Donatello, though, he had no interest in turning his physical skills into a calling of any sort. “I didn’t want to pursue anything after high school. I went into Engineering at the University of New Mexico and I gave up on all athletic endeavors. I wanted to build and design software. I actually wanted to create new video games. That’s what I wanted to do.”

It took running into Luttrell while he was working a birthday party to convince Dodson that he should at least consider training with Jackson and see where his significant grappling skills could take him.

“[He] said that I was wasting my God-given talent and that I needed to go head and give it a shot. School is a foundation that will always be there, but my talent will go away in time. I need to make sure that I can pursue something and use it,” Dodson explains.

With his mind open to the possibility, Dodson showed up at Greg Jackson’s gym in Albuquerque ready to fight. It was a moment that would change both his future and his very concept of himself. “To tell you the truth, the only time that I really that I could start doing this was when I fought in the gym and when my coaches told me that I was one of the best prospects they’ve ever seen. Greg Jackson made me feel like I can go ahead and reach the stars and grab the moon and take it home with me. So he gave me the confidence and the want to be a fighter, that first day I ever walked into the gym. That was my first fight.” 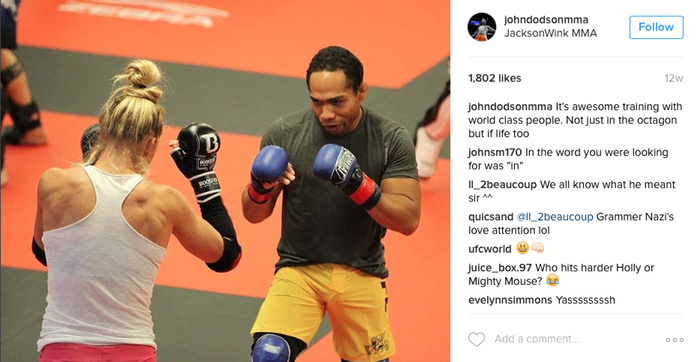 Instead of attending the University of New Mexico, Dodson became a devoted student of Jackson’s and immediately began training daily. He hasn’t ruled out the possibility of going back to school at some point so that he can make those video games he was dreaming of making before that fateful evening in a themed children’s restaurant over a decade ago, but his career is still young and he’s too busy taking on all comers in whatever weight division is required of him to think about that too seriously right now. His biggest concern is getting—and truly earning—a title shot.

“[A win over John Lineker] will put me into contention against anybody that’s willing to fight. I don’t even care who, I always want the title. But there’s a million people ahead of me and I want to stomp every single one of them so when I become the champion, they won’t have to second guess,” Dodson says. “I’m a working class man. I don’t want to sit there and say ‘give me.’ I want to work as hard as possible so that I can be the champion that everyone wants to see. I don’t want to be that king that doesn’t get to fight for himself.”

And, if you think about it, it’s not like he’s not entirely uninvolved in the video game creation process right now. “I didn’t get to design the video games, I actually get to be the one that they design video games about,” he quips.

He also, in a way, gets to be like Donatello again. And a little like the rest of the Turtles as well. When asked if the heroes in a half shell influenced that first fight at all, Dodson doesn’t hesitate. “I was trying to be Raphael and be as strong as possible and use my leadership skills like Leonardo does every single day. But I had to use the technical abilities found within myself to show them how amazingly smart and brilliant I am by being Donatello. But I did it with a funky little smile and everybody kept on laughing at me so I laughed back and I did it like it Mikey.”