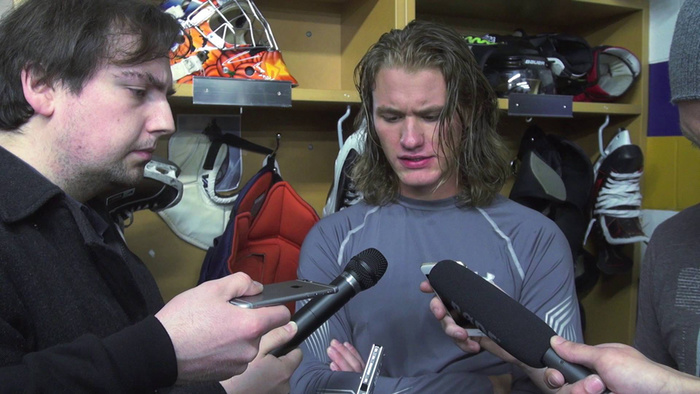 Everyone or almost everyone—loves a good origin story. From the New Testament to the neverending deaths of Bruce Wayne’s parents and Peter Parker’s uncle, we’re fascinated by the catalysts, epiphanies, and pivotal moments that make people who they are.

In today’s My First Fight, actor Dylan Playfair tells us about an after school brawl that’s almost as entertaining as the misadventures that he gets up to as Reilly the hockey player on Letterkenny:

I was fourteen years old. I was playing Midget AAA hockey and I was in this morning hockey program. Before school started, we’d go to hockey practice and that counted as a gym credit. After hockey, we had a half hour before school started and we’d all go to Tim Hortons and get Iced Capps.

So I rolled in and a friend of mine was sitting with this other kid who I didn’t really know that well. I said “Good morning,” and I heard under the kid’s breath, he goes “Fucking faggot.”

I was like “Excuse me? Did I hear that properly?”

And he was like “Do you have a problem?”

So there is no problem and I go start the school day. As the day goes on, I hear “I heard you had a problem with Austin.”

So the day goes on and these kids are, you know high school. “I heard you and Austin are gonna fight! I heard you and Austin are going to fight” And by the end of the school day, it had gone around this high school that we were going to have a scrap. So I’m at my locker getting my gear together. I’m literally getting my hockey bag out of the big lockers that we stored our hockey bags in and this kid comes up with three of his buddies and he’s like “I heard you were talking shit.”

And I said “Listen kid, I’ve got to be picked up by my mom in half an hour to go to hockey practice, so if you want to scrap, we’ve got to scrap right now and we’ve got to do it behind the Walmart parking lot because I’m not getting suspended.”

It was like an order at Starbucks. It was logistically figured out. I knew how much time I had. I knew how much time he had and my mom was coming. So I texted my mom and said “Pick me up outside the Walmart instead of in front of the school.” We walked across and it was like a scene out of a bad nineteen eighties movie. There was a group of at least a hundred kids walking. And I could hear on his iPod, he had “Go To Sleep” playing by Eminem.

I was like “This kid’s getting geared up for this. This is going to be an absolute slaughtering.” Because I’d been playing hockey for quite some time, I’d done a lot of boxing and stuff like that, and I was pretty confident in my ability to beat up a kid who was 8 inches shorter than me and 90 pounds lighter. I actually kind of felt bad about it.

He was wearing a white hoodie, I remember. I was wearing my team jacket. So we square up and he’s standing there and I just thought to myself “OK, I’m going to punch him hard once in the mouth and then he’ll get the message and we’ll go home.”

I walked up—he didn’t have his hands up or anything—and I leaned right into one and it was smack, right in the mouth, and his two front teeth went back and he looked up and he grinned ear to ear. And that’s when I knew I was in trouble, because he was loving it.

So I’m swinging for the fences and this kid’s taking these punches like a champion and, at one point, I grabbed his two shoulders and I looked at him and I was like “Are you done? You haven’t gotten a punch in yet. This isn’t fair. I don’t feel right about this.” And he leaned his head back and he head-butted my nose and he broke my nose.

And so I’m like “Ok. You’re going to go to sleep now!” And I started hammering on him. It was winter time and he slipped on the ice and he slid down and I was holding his hoodie. I could see the blood coming through his hoodie as I was punching him and I thought “OK, now I’m freaking myself out because I’m either going to knock him out or he’s not going to stop until he knocks me out. And I’m not prepared for this.”

He slipped out of his hoodie, and his face looked like it had been through a meat grinder and he was still smiling like a possessed little Tasmanian devil. So I grabbed him and I picked him upside down and I was like “I’m not going to stop until you stop! And you have to stop right now!”

Then we could hear the police sirens coming because someone had called the cops, so I put him down. As we were running away together, he looked over and he was like “High five me, bro! That was awesome.”

And for the rest of the year, we were buddies! There was never another beef between us. To this day, I still am a little bit confused as to what was going on in his mind, but we ended up becoming buddies.

That was my first real real fight. I’d been in schoolyard push arounds, but that was my first square up, circle up, full on tilly, like “OK, we’re punching to hurt” and it was intense. I remember the taste of pennies because there was blood in mouth. It was quite an experience.

Season two of Letterkenny premieres on CraveTV on December 25. Season one is available on iTunes now.