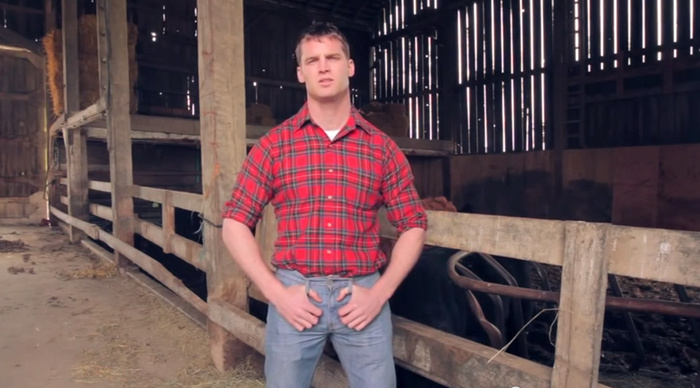 In today’s My First Fight, we talk to Letterkenny star and co-creator Jared Keeso about the rock’em sock’em street fight that could have cost him his career.

Growing up in Listowel, the small Canadian town that inspired the fictional setting of Letterkenny, Jared Keeso was constantly aware that one wrong move could get his ass kicked. “There’s a lot of big corn-fed dudes walking around,” he tells Fightland. “The hicks at school, those are the guys who work hard with their hands every day and as I say, have a handshake that’ll lift you off the ground. They were never bullies, but sometimes they were. And so you’d live in fear of some dude actually twice your size just swatting you like a fly at some school dance or outside in the parking lot. So it was legit. There was a lot of fighting in Listowel and it kept everybody on their toes and everybody behaving.”

So when he started to expand his quippy, viral Letterkenny Problems videos into the half hour Letterkenny comedy series, he knew that he wanted the fight culture of his formative years to be reflected in the show. “When we made the step from a YouTube series to a television show, you know you’ve got to think about what else can we say here? What else can we do? And a priority going into it was that we had something that our YouTube views and the feedback proved that it was funny. But what was important to me, and what was priority to me was to make sure that it was also tough. That there were stakes in this town and that you’d get your ass kicked if you stepped out, if you were out of line. And that’s certainly true to form from growing up in Listowel, and that I know very well. It was easy for me to write.”

Keeso, who plays Wayne, the toughest guy in Letterkenny, even had his first fight in Listowel. But he wasn’t prepared to talk about that battle “because there’s too many people from back home involved.”

He did, however, offer us this story of an honor-defending brawl instead:

“I’ll start by saying, you know, talking about your fights is about the least tough thing that you can do. I want to make sure that people know that i don’t think I’m a tough guy by any means. But here’s a good one:

“I was at a bar in Vancouver with my brother. I was 26 and we’d shot The Don Cherry Story [a CBC miniseries about the infamous Canadian hockey coach turned violence-loving TV personality] and it was just about to come out. So there was a lot at stake at the time. It was important that I behave because, if I didn’t, I could literally ruin everything. If I got in a fight at the bar, I imagine that the media would have a field day with that. ‘Actor who’s playing guy who glorifies violence is a shithead,’ or something along those lines.

“But anyway, what happened was, we come out of the bar, and my girlfriend at the time, she was standing there and she was pretty upset. I said “What happened?” And this guy had called her a bitch and her friend a bitch, or something like that.

“The way that I was raised is that that is just an absolutely no fucking fly zone. Dad always said the three areas where you have to fight: someone insults your girl, your family, or runs your goalie, you have to fight. That’s how we were raised.

“So I come out of the bar and I see this. And I was with my brother at the time, and my brother is a killer. My brother will kill you. He’s a scholarship athlete, he’s a Canadian soldier, and he was taking kickboxing at the time. So I knew I was going to do it, so I put him in a cab.

“He says that he still remembers, he was turning the corner up the block and he looked back [through the cab window] and saw me running across the street. That’s when I was going at the guy. I didn’t jump him. I would never do that. He actually threw the first punch. And so I had him by the back of his sweater and I was pulling him forward and uppercutting and I got the top of his head so many times that my hand wasn’t right for honestly a year.

“But anyway, I dropped him—and he was shit-faced, it wasn’t much of a fight—I dropped him and when I looked up, there were two police cars and a paddy wagon right there and there were six cops running towards me. And so what’s going through my head at the time is ‘Holy shit. Jared, you’ve ruined everything. All of the hard work that people have done on The Don Cherry Story. This is going to come out and screw everything up.’ I realized that in that moment.

“But divine intervention... two of my pals were in a fight across the street. And they went through a store window. As all of these cops were running towards me, all of a sudden there’s this massive explosion as these dudes go through a picture window. And so [the cops] turned around and ran toward those guys, and I had a split second to think. And I ran so fucking fast. I ran so fast. I jumped in a cab down the block and yeah, it was… like I say. Divine intervention. I narrowly avoided big, big shit there. So that’s it.”

Season two of Letterkenny premieres on CraveTV on December 25. Season one is available on iTunes now.

Letterkenny Is The Best Fight Show On Television