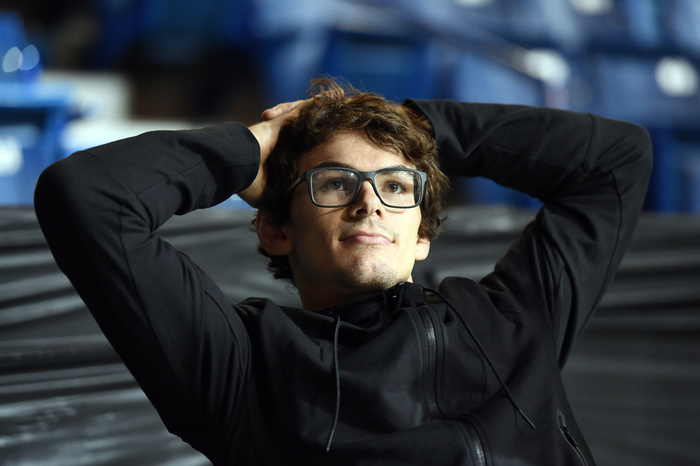 In today’s My First Fight, we talk to UFC lightweight Olivier “The Quebec Kid” Aubin-Mercier, who is facing Thibault Gouti at UFC Fight Night 89 this Saturday, June 18 in Ottawa, about childhood Taekwondo lessons, adolescent Judo losses, the transition to MMA, and a weird fight at a house party.

There aren’t many personalities quite like Olivier Aubin-Mercier in the MMA universe. The affable young fighter from Boucherville, Quebec has a rather quirky sense of humor, which stands out in a culture that often leans toward the overly earnest. He once brought muffins to the weigh-ins to share with his opponent when they’d both made weight. Which he then followed up by musing that he really should have drugged said muffins just in case he lost (he didn’t). He sometimes tweets amusing off-kilter observations like “McGregor is the Justin Bieber of UFC. ‘In a good way.’” And when we asked him what that might make him, he answered with “Maybe the funny guy with the big mouth. He’s doing Brooklyn Nine-Nine.”

Which is a pretty apt comparison when you think about it:

So it’s appropriate that even his answer to our My Fight Fight query was unique. Where most fighters we’ve talked to have been able to pinpoint one specific turning point or moment of revelation, Aubin-Mercier offered us wry and reflective look back at the various lessons, misadventures and minor epiphanies that led to his current career in the UFC.

“I did Taekwondo when I was five, maybe until I was ten. And then I stopped martial arts for three years,” he recalls.

While he mostly behaved himself out of the gym, he did have a group of friends that he constantly grappled with. “I was always playing with my friends. I was fighting with them, wrestling with them. I was not hitting any people. We were just wrestling, so, since a young age, I’ve been wrestling. But I never really got into a fight outside training.”

Aubin-Mercier developed a fondness for watching Judo when the Montrealer Nicolas Gill claimed a silver medal in the sport at the 2000 Olympics in Sydney, and his interest intensified when a gym teacher gave him tickets to see his new hero at a local competition. “I went to the tournament, and I liked it. It always stayed in my mind.”

By the time he reached high school, Aubin-Mercier had transformed his love of watching Judo into a desire to participate. Judo didn’t love him back right away. “I lost all of my fights in the first year,” he admits. But he kept with it and he improved. Significantly. He eventually ended up on the Canadian national team.

While he was still competing with the team, he discovered a new Montreal hero, though: a popular up-and-coming MMA fighter named Georges St-Pierre. Aubin-Mercier’s interest in GSP grew into a love of mixed martial arts in general and, when he was in his early twenties, he turned away from his Judo career to become an amateur fighter.

As much as he loves MMA, Aubin-Mercier admits that the choice was hard and a bit terrifying at first. “Now I know I did the right thing but, I would say, a year or two after my decision, I didn’t know yet. I was supposed to be on the national team for one more year. I had the choice to be on the national team, or to start MMA. And, being on the team, the government is paying you an amount of money. Starting as an MMA amateur, it’s no money. I didn’t get much money for maybe two years doing the amateur thing.”

Much like his Judo talent, though, his financial situation eventually improved. Aubin-Mercier says he’s comfortable now. And, more importantly, he’s even more excited about his MMA career than he was about his time in Judo. “I’m more passionate about it. It’s more fun to learn the techniques. There are so many things that you can learn to do.”

When asked if there was one specific fight or match that stood out as in his journey, Aubin-Mercier isn’t sure. But he does offer this almost stereotypically Canadian encounter at a house party:

“I was doing Judo at the time, and I was maybe a little too peaceful. The guy was hitting me and I was just telling him ‘Oh, you don’t have to do that. You can stop.’ I was just kind of dodging some of his punches and eating some of his punches and, at some point, he just stopped and walked away. The day after, I was just like ‘Oh. Maybe I should have, like, showed him what I can do.’ And that was pretty much it. That was my only fight outside of the gym. I got my ass kicked, basically.”

It might not have been the big moment that made him entertain the idea that he could be a fighter. But it did at least help him to realize that, in some circumstances, it might actually be OK to hit back. “I started MMA after that, and I don’t think it would happen again,” he laughs.