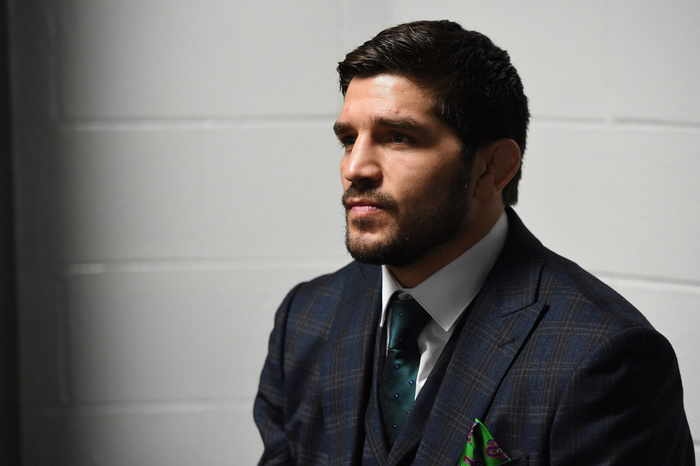 In today’s My First Fight, we talk to Canadian MMA veteran and UFC welterweight Patrick Cote about the terrible loss that made him want to come back for more.

Fourteen years into his professional career, Patrick “The Predator” Cote has mastered the art of preparation. Working as a UFC commentator for RDS, the Canadian French language sports television station, between fights, he’s been given a whole new perspective on the sport. “I see so many fights, so many situations about fighting,” he tells Fightland. “On the ground. Stand up. So many things during the fight, that it’s put a lot of options on my head. There’s no doubt in my mind that I’m a better fighter now because I’m seeing so many fights as a commentator now. You learn a lot just by watching.”

So when he steps into the Octagon against Donald Cerrone for a welterweight bout in the co-main event of UFC Fight Night in Ottawa, Canada on June 18, he’ll know exactly what he’s getting into. Cerrone recently told MMA Mania that he’s never seen one of forthcoming opponent’s matches because he doesn’t pay attention or watch anyone’s fight footage—a claim The Predator isn’t entirely sure he buys, by the way—but the only thing Cote’s not monitoring right now is the Cowboy’s casual dismissal.

“The difference between him and I is that I’ve seen all of his fights. I know him very well, and he’s fought so many times that he has a lot of fights I can watch. So that’s OK. I don’t pay attention to what he’s saying or doing. I have control over what I’m going to do. That’s what I’m focusing on.”

Cote walked into a fight wildly underprepared once. Although it ultimately changed his life for the better, it didn’t work out particularly well for him at the time.

In 2000, a then 20-year-old Cote started watching MMA. He became an aspiring fighter almost as quickly as he became a fan. “I was like ‘Man, that looks like fun!,’” he says of his introduction to the sport. “And I called a promoter at that time and I said ‘Hey, let’s go! I’m going to try it!’”

Just like that, he had his first fight booked on an amateur card in his home province of Quebec.

The future Predator was far from a combat rookie when he took the match. “I did judo for ten years when I was young,” he says. “I started boxing around 17. I did a lot of amateur boxing fights.” But his experience with mixing those martial arts was minimal.

In retrospect, he admits that he was quite naive going into his amateur debut. “Totally. I was a little bit cocky, too. I was in over my head about being a fighter. I thought it would be easier than that at the beginning.”

It wasn’t. But in the end, that only made him love it more. “I lost pretty bad, and I was like ‘Man, I really want to do that!’ Because I fell in love with the sport. After that, I realized that it was a real sport, a real thing. That you can’t be just fighting your brother in your living room and being stronger than him. You’ve got to have a career and do that. So after that, I found the right team in Quebec City at the time, and I started to train seriously.”

Cote made his professional debut two years later, and his UFC debut two years after that. It was far from a smooth learning curve at any point along the way, but when you’re the kind of person who finds a destiny at the end of a terrible loss, that kind of struggle just becomes another weapon in your arsenal.

“When I started, I was probably the worst fighter ever. I was really, really, really, bad,” he laughs. “I didn’t have the natural skills to do that. I had to learn everything from the beginning. But that’s the one thing that I had—and I still have—is an open mind and a desire to get better every day. I was shutting my mouth and taking all of the advice from everybody. And it paid off in the end. And here I am.”