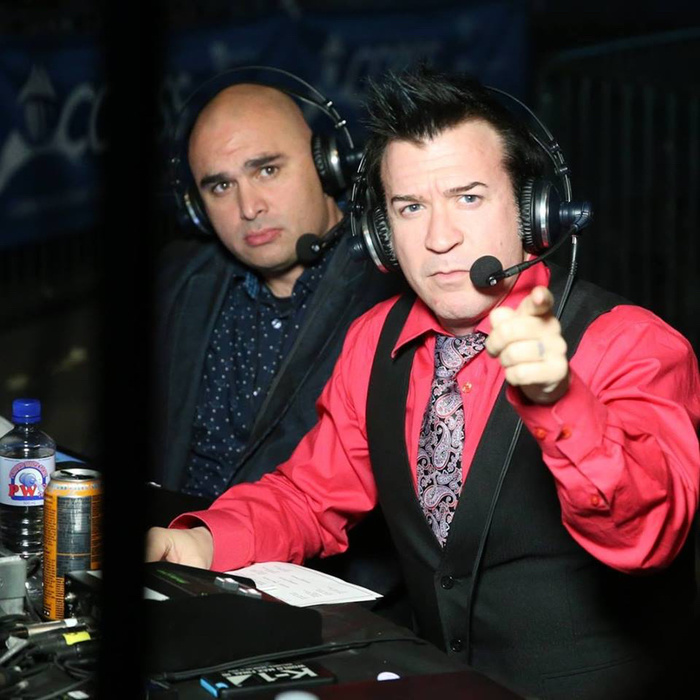 In today’s My First Fight, we talk to former glam rocker/MMA fighter/ Fight Network analyst and current MMA media maverick Robin Black about his professional mixed martial arts debut and how it’s perfectly prepared him for the next chapter in his career and life.

“Well, I think I’ve had a lot of those,” Robin Black muses on the phone from his home (and makeshift home studio) when asked to pinpoint a particularly epiphanic moment in his marital arts journey.

After a few seconds of consideration, he settles on his first professional fight, a 2008 bout in Hull, Quebec, just across the border from Canada’s capital city of Ottawa, Ontario. (Before MMA was legalized in Ontario, attending and/or fighting on cards in Quebec border towns like this was a right on passage for the province’s die-hard MMA lovers.)

“It was a week before my 39th birthday. I basically woke up from a deep sleep and I heard an audience screaming, then I wondered where I was. And I got punched in the face and I realized that I had been flash knocked out on the first punch that I took. And to wake up from that? Even though you only lose consciousness for a split second, you wake up as if you’ve just been woken up on the couch and you have no idea where you are and the TV is still on in the background. It’s pretty freaky,” he recalls.

“And right then, in that moment… I guess you don’t really get to decide. Your body and your brain either decide that you’re going to come back and swing and engage or you’re going to cover up. Which would be very logical! You were essentially unconscious only a moment ago and you’re being hit. And I’m happy to look back at the fight and realize that I came to, not quite sure where I was or quite sure what was happening and I fought. And I’m really, really pleased, because I didn’t always have that reaction. And you don’t get to choose that reaction. That just happened to be the one that on that night—with that preparation—that my body gave me. So I fought back and finished round one and had a really good beginning to round two until I got caught with a knee and basically went blind. But it was an incredible experience. That fight… it’s going to be a memory that is special to me for the rest of my life.”

Less than a minute after our interview, Black calls back. “I didn’t realize it until I was talking to you about it, but that fight is exactly what’s going on in my life right now.”

He’s right. If a novelist or filmmaker was writing Black’s life right now, his second act could easily be criticized as being just a bit too on the nose. But this is exactly what happened:

Two weeks ago, while on vacation to visit his wife who is currently on tour with a production of Kinky Boots, and after a whirlwind Las Vegas business trip that included attending the World MMA Awards as both a Best Analyst nominee and presenter, he woke up to a phone call. And he got hit. Hard. The Fight Network, his employer for the past eight years, was scaling back on their original content. Black, his partner in crime John Ramdeen, their producer, and a number of their coworkers were out of a job.

Dazed but still on his feet, Black started swinging again. “I had to work out very quickly how I was going to eat but, most importantly, how I was going to keep making my art. And I’m not the type of person who will be easily discouraged. I wrote in my book Take this stumbling block and turn it into a stepping stone.”

After a few days of much-needed downtime with his wife, where he tried his best to keep his mind off of things, he sprung into action, recalibrating his vision for producing martial arts-related material, and assembling a team of likeminded individuals to help him produce it. “I flew back Sunday, I was supposed to be back at work on Monday. By Tuesday, I had started my own YouTube channel and I shot two videos that night. In the last six days, I’ve built a team of four other people, and we’ve put up about nine or ten shows and pieces of video and we have 4000 subscribers and we’ve got about 35,000 views. It’s been a crazy, crazy period of art and creation and learning and fear and excitement.”

While he was establishing his channel and setting up a Patreon account, Black also started to realize that his transition into self-employment wasn’t just going to change his finances and hustle, it could also completely change his work for the better. “It wasn’t just doing the work and getting to do what I love, but I had the total freedom to express it any way that I wanted. Fight Network was a very uncorporate corporate environment, but it was still a corporate environment nonetheless. So suddenly, when I was free to do what I wanted, I realized that my perspective of fighting as an art form and as a fine art was going to be the focus of whatever I did to talk about fight and commentate fighting and analyze fighting and express the beauty of fighting. It was going to be related to art.”

Setting up shop in a corner of Toronto’s beloved Playdead Cult art studio with Moe Carlson and Aaron Verdonk, a pair of musicians that he’s worked with since his days as the leader of The Intergalactic Rock Stars, Black is ready to bring a whole new focus to the A in MMA.

“We don’t have any fists, or skulls, or battle axes, or blood around. We’re surrounded by real fine art. So I’m surrounded by musicians, fine artists, graphic artists, video artists and I’m the fight artist,: he says of his new work space—and his new headspace. “So I’m taking fight analysis and I’m putting it in an environment of pure art. And that, over the last week, has been the most exciting part. Because fighting doesn’t have to be talked about as a meathead sport, or as hammer and nail, or as violence. It is art. I express it as art. I analyze it as art. I look at fighting the way that a sommelier looks at wine. And that’s how I want to present it.”

Black realizes that, as far as the parallel with his first fight goes, he’s barely stepped into the second round at this moment. But, between his work as a musician, as a professional fighter, and as a martial arts analyst, he’s been training for this his whole life. He’s got the instincts to keep going. And he’s ready to keep fighting for the career and the work that he believes in.