My First Night as a Ninja 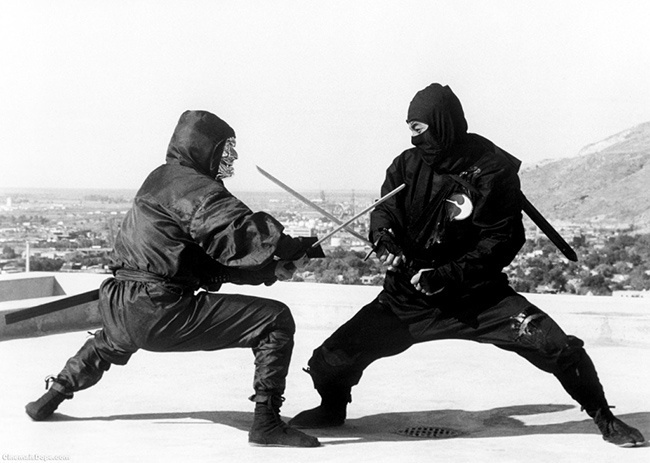 Nothing about the way my office-cubical Tuesday began foreshadowed that I’d end the day surrounded by priceless ancient art learning proper eye-gouging technique. But being a ninja means being ready for anything.

At least that’s the impression I gather from our instructor, Randle Charles. He’s a black belt in To-Shin Do, which he describes as a modern-day extension of ninjutsu that’s more practical for an age like ours, when carrying swords is generally frowned upon. Charles is a muscular young Canadian with a black soul patch who has studied martial arts since childhood and who carries himself like a man ready for anything. He’s also the first Westerner I’ve ever heard pronounce “ninja” “NEEN-jah.” Charles offers one-day workshops at $125 a pop, so his “Ninja Nights,” a series of free hour-long lessons sponsored at the Crow Collection of Asian Art in the Dallas Arts District, is a bargain.

Free or not, I have my doubts about a 21st-century white guy teaching an ancient Asian tradition defined almost entirely by secrecy. The setting adds to my ambivalence. The Crow Collection is free to the public and one of the coolest museums in the country’s largest arts district, but it’s impossible for me to separate it from its founder, Trammel Crow, who brought the Republican Convention to Dallas in 1984 and who fathered Harlan Crow, who funded the Swift Boat Veterans for Truth’s cheap horseshit smear campaign against John Kerry in 2004.

Milling around before class, we sign waivers and feign interest in the collection of Southeast Asian statues of Buddhist disciples and other artifacts. One kid walks up to the biggest statue in the room and pokes it about a foot above the “Do Not Touch” sign. There are a couple dozen of us, half children and half adults of diverse ages and backgrounds with a heavy emphasis on guys in their 20s and 30s who grew up during the 1980s ninja-movie craze. There are a few couples, including an American man trying to learn more about his Japanese wife’s culture, and one cheerful, black-clad septuagenarian who changes into black barefoot-style toe shoes.

We gather around co-instructor Erika Ramelli, founder of the event's sponsor, Better Humans—an organization dedicated to helping people achieve “physical and emotional balance”-- who tells us she’d practiced MMA and kickboxing for years but decided it was useless in real life compared to what she’d learned from Charles. No surprise there, I guess. Real-life fights don’t have weight classes or gloves, and there’s not a single thing we learn this Tuesday evening that would be legal in any fighting promotion I know of.

We go around the horn giving our names, martial arts backgrounds (about half of us have at least a few lessons under our belts), and the reasons for our interest in ninjas. The other students say they admire their stealth, cunning, survival skills, nobility, and philosophy. I’m the only one who admits being fascinated by their sneaky ruthlessness, their employment of poisons and deceit. If Charles is insulted, he doesn’t show it.

Charles demonstrates the concept of constant preparedness, or situational alertness, through a couple of breathing exercises. We partner up and take turns closing our eyes and meditating (or just zoning out, for those of us without any meditation experience, though I’m not convinced they aren’t the same thing). At random intervals the other person says, “Now,” and the person with closed eyes says whether he or she was in the past, present, or future. Obviously, being in the present is ideal for a ninja.

Next, we all close our eyes and Charles startles us by clapping together a pair of wooden blocks every few seconds. “Now I’m going to clap them twice,” he says after a minute or two. CLACK! It’s the loudest yet, echoing off the stone floor. I tense up, awaiting the next sharp report. It never comes. That tension of waiting for the next crack, Charles explains, is the ideal state for a ninja--present and ready to defend oneself. It seems completely at odds with the stress management Ramelli championed earlier when describing her organization. I am growing more skeptical.

Charles then recaps the previous week’s lesson, escaping a one-hand wristlock, and my doubts subside. It’s such a simple yet effective move that I’m surprised I’d never seen it. Using your free hand, you rap your knuckles hard three times against the attacker’s hand that’s holding your forearm. Then with the free hand, push on the shoulder of your ensnared arm to twist away and yank your hand free, spinning into a defensive stance. Simple.

This week’s escape is even nastier. First, I rotate my wrists so my palms face me. This brings my attacker’s thumbs between my wrists. I then smash his thumbs against each other once, twice, three times. Done hard enough, Charles says, this can break your opponent’s digits. I then lock my own thumbs together in a bird shape – the “Dove of Doom,” he calls it – and fling my hands downward and whirl them back up, and take one step back into a defensive stance. Then with the hand closest to my attacker, I jam my fingers into his eyes, smash his nose, or stiff-arm his forehead. He will not be expecting this, Charles assures us.

My practice partner, Jeremy, is a foot taller than me. We are both grown-ass men but neither of us has outgrown the childhood combat play habit of making explosive psht! sound effects during strikes and groaning dramatically each time we get hit. Charles urges us to move in super slo-mo for safety’s sake, but we can’t help speeding up a bit as we gain confidence and I thump Jeremy’s forehead pretty good once. He laughs it off.

As class wraps up, Charles suggests that ninjas are really mind readers, that ninjutsu is really just a matter of trusting one’s instincts, one’s own ability to feel out the vibe of a room. We will learn more about this later in the series. I still have no idea how authentic this is or how appropriate it is for Westerners to play-fight while surrounded by priceless antique Eastern spiritual art, but I will be there.

XARM: All Hype, No Hyphen