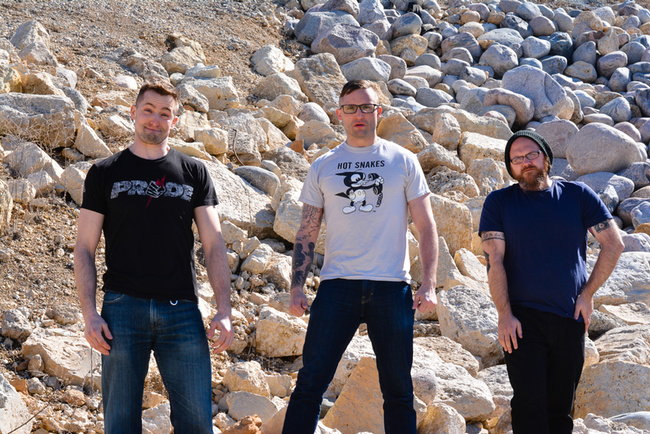 Kill. As in Kill Everything Now Mode. Or the much more Canadian polite KEN mode. A bit of Black Flagalia picked up from some olden times interview with Henry Rollins before he became the tetchy and grandmotherly scold he is now, was what the Matthewson brothers, Jesse and Shane, came up with to describe going all in on the whole music thing.

And moving their shit off a stage that they're sharing with Russian Circles one night in San Francisco, Jesse, sweat-drenched with hair stringing across his forehead, makes manifest exactly what the fuck their name means since it is way more than clear that to even get through a show like the three-piece just banged through you'd have to very specifically be prepared to not just kill a little bit, but kill a lot.

Making it not a far reach at all that not only does he train for this but he TRAINS. As in martial arts. As in the fine art of being able to defend yourself from threats both real and imagined, expressed and maybe just considered. So on the occasion of the release of their newest record, Success, and a tour, we plumbed the depths of his Juno-award winning-friggin' mind to make sense of the musical majesty that should accompany any walk into a cage for the express purpose of walking out of the cage, a winner.

Fightland: Now you'll have to excuse me if I trod on some gross cultural stereotypes but you're Canadian and Canadians, without fail, are some of the most polite and nice people I've ever met. Now I know you have hockey but the main point of hockey, despite what most have seen, is actually NOT fighting. So how'd you find yourself in a mind frame where you were interested in fighting outside of Hockey?
Jesse Matthewson: Honestly, my fascination with fighting probably began as a love of professional wrestling and the whole pageantry behind the productions. My brother Shane and I used to pull toques over our faces and beat the ever living proverbial shit out of our 'my pet monster' and cabbage patch kid dolls as the tag team Demolition back when we were 5 and 3, respectively.

My fascination with pro-wrestling came had a natural ebb and flow, depending on what the promotions were doing until I discovered mixed martial arts, admittedly around the beginning of the TUF era. I remember watching the old UFC events back around when they started and them holding an interest in a similar way pro-wrestling did, but it just never clicked the way it did until TUF had started spreading its wings in North America...then I was told to check out Pride, and through the fabulous head kick knock outs of Mirko Filipovic I knew eventually I would have to take up kickboxing. A friend of mine in the hardcore scene around here basically teased me into coming to train him while talking about MMA on a message board of all things, and I've never turned back since.

What martial arts did you study (and why that one)?
JM: I had explored TKD back in my early teens but never developed a passion for it...it wasn't until I started training Muay Thai at Canadian Kickboxing and Muay Thai Center in Winnipeg (now CFC GYM - an affiliate gym of Roufusport) that I was truly hooked on martial arts. Really, it was the fabulous knockout highlight reels of Crocop and Wanderlei Silva in Pride that made me want to take up Muay Thai, and at the time I was going through my first real breakup/heartbreak and I needed something to help me out of the subsequent legitimate clinical depression. I'd never really partook in any kind of explosive exercise regimen before this - shy of bouts of playing hockey as a boy, or weight training in my late teens, and really being in KEN mode was my only way of blowing off steam, so to speak. I guess it is that Canadian politeness that's repressing some overload of testosterone, because for the first time in my life I felt balanced.

How tall are you and what do you weigh?
JM: I'm roughly 5'10" and range from 160-170 pounds, depending on whether I'm in training shape, or withstanding tour malnourishment.

Are you the older brother?
JM: I am the eldest of three brothers. The experiment. I'm also the shortest of the three, with a whopping approximate inch or so in difference between the trio. So much genetic variation going on.

OK, so do you find any similarities between the music you play and the scene that it's part of and anything that's happening in combat sports or the personalities it attracts today?
JM: I definitely see parallels between the kind of bizarre counter culture of music we all belong to and the world of combat sports. There's a certain tenacity and outsider nature that seems prevalent in people who survive in these worlds; at least in the long run. Sure, big athletic, jock types sometimes get into combat sports, but usually it's the men and women that are a little bit crazy who can handle it, and stick around. It's almost like you need that element of torture, or a certain fire within to get what you get out of both fighting, and this kind of music. It's not even an aggression thing...it's hard to describe.

But you're a bright guy. Does the pressure to dumb down both fighting and music bring you down?
JM: I have a B.Comm from the University of Manitoba's Asper School of Business, and worked in accounting for a good 6 years before quitting to tour full time. My brother, and drummer Shane is a Chartered Accountant, or CPA in the US. He's high level.

Honestly? Sometimes we resent that desire to dumb things down, or some people's lack of ability to understand what we're doing and why, specifically when it comes to things like ticket sales, album sales, music business glad handing bullshit, but really, why should we expect anything from anyone in this world? Nobody owes us shit.

On the flip side, the office job world seems to give us nothing but props for having the guts to attempt making a go at something we love and care about. The number of people who give us un-ending support for trying something they never were willing to try, is really pretty cool. They'll never understand where the fire comes from musically though. These are the kinds of regular office folk who will still make fun of you for having any interests outside of doing home reno's and raising a nuclear family.

I don't know if most 'normal' people actually know just how stupid the rock and roll trope is, but they certainly believe in the relative 24-hour party people cliché that so many rockers like to live out. When I have to explain to office jobbers that I'm taking on the roll of 4 people's worth of work on a tour because we can't afford to hire help, they often can't wrap their heads around it because they think I'm out there drinking and sleeping.

I love strikers, and have a bias toward tight Muay Thai skills. Knockouts are always fun, who can deny that, but when in combination with high level striking skills, it's fascinating to watch.

And now: the most monumental walkout song ever, what is it?
JM: I feel like if I had to walk out I'd want to take the slow, oppressively heavy route; cool as a cucumber, but ready to unleash an avalanche of devastation: Melvins—"Roman Dog Bird" or Neurosis , "The Doorway".

Check out more My Walk Out Songs: