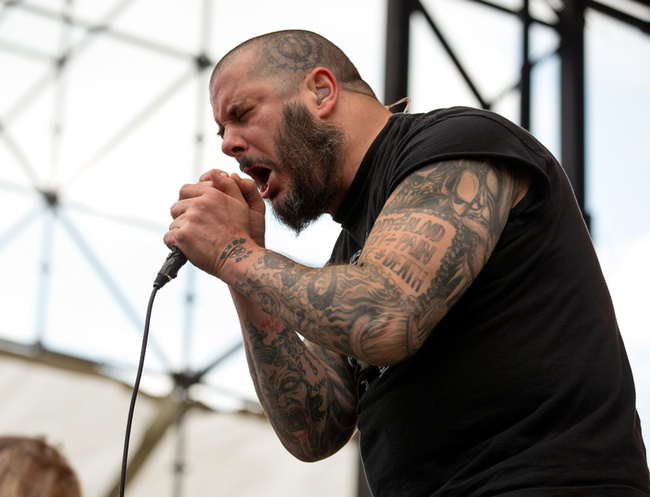 This should really be just about the shortest intro ever.

Because if that name rings no bells you're also probably asking yourself what "MMA" is. What a "walkout" is. What Vice magazine might be. Which means we really can't help you and while we admire your attempts at trying to "figure things" out the likelihood that you will at this point? Very low.

Unless you're either very young or very old in which case we'll give you a useful cheat sheet. Anselmo sang for Pantera, a band whose entire catalog was composed of what might have constituted the best walkout songs ever: from "Walk" off of A Vulgar Display of Power, the album that broke them big, to just about everything else in their six record catalog.

Fueled by a pure and solid Southern anger, Anselmo took very possibly as little shit as possible in general. And specifically, when he shaved his head, tattoo'd and muscled up, went shirtless and turned a lifelong love of boxing into a stage show that had him being compared to Rollins who then called him out about it, Anselmo squashed that potential beef with a withering "I'm not going to take any shit from a guy who can't sell more than 10,000 records".

Add on to that some things that were said about his late guitarist Dimebag Darrell and you have a figure as close to unredeemable as you're likely to get in metal (discounting the potential wife killers) by some people's lights.

So from the road where he's on tour with DOWN, ladies and gentleman… well, you know…

Fightland: I've heard how disinterested you were initially in MMA but Scott Kelly was telling me recently that you've relented and relaxed your position on this a bit.
Phil Anselmo: I have no idea what Scott's thinking about. I love him like a sister [laughs] and by this I mean like a Black chick. But no, man, I'm still a boxing fanatic but let's put it this way: I respect it. Getting in that cage involves a lot of work. And it's a combat sport.

Which you love.
Oh yeah. It's what I was raised with. It's a tradition. You see, Marquess of Queensberry? Tradition. Watching fights with my old man, even my stepfather. Muhammad Ali is all over the TV set. You just couldn't get away from the dramatics of it all. Spinks. Larry Holmes. Ali regaining the title from George Foreman.

And yet the airwaves are a'full of rumors of boxing's decline.
Look, as the heavyweights go, so goes boxing. And America has not had a heavyweight champ in a long time. And we don't have one now like Wladimir Klitschko who can fill 60,000 seaters in Germany. Not any American fighters who can pack in those numbers. And none with his skill and agility.  And none that are willing to test themselves.

Sugar Ray Leonard tested himself. Mayweather won't do that. Promoters are battling it out. Promoters, managers, lots of reasons it's got problems.

But the Klitschko brothers are on such a different level with a kind of hand speed we just don't see anymore. Except maybe in Deontay Wilder. But, man, I've forgotten more about boxing at this point than I remember.

But you're a sports junkie so things might get kind of fuzzy anyway. Hey, when you toured with Scott [Kelly] did he make you watch curling on TV too?
And played them too. Playing football from PeeWee league. Linebacker, quarterback. But curling? [laughs] No, man, I ain't watching any curling.

OK. So you know the drill. For you though you can just think of guys in silky shorts with tassled boots if it makes you feel better, but the idea is: you pick some music that would make the best Walkout anthem ever. For you as a fighter or for a fighter.
"Black Houses" by Portal.

The greatest death metal band in the history of death metal. They're from Australia. This shit would absolutely strike fear in the hearts of all of these texting high gloss douches.

Check out these other 'My Walk Out Song' interviews: