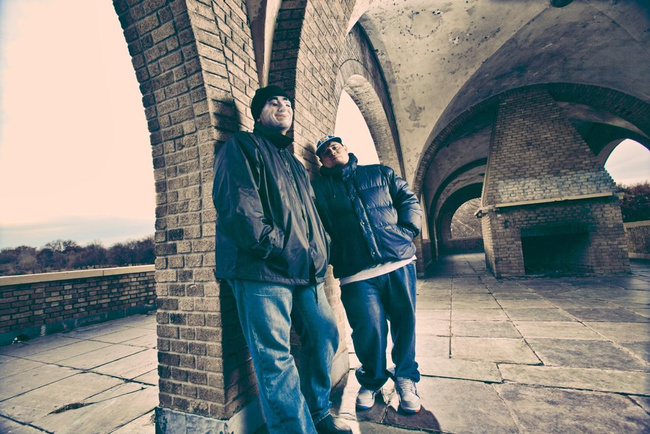 When I heard Jedi Mind Tricks were dropping another record I thought, “hell yes.” Not once has the Philly duo not dropped heat: they're famous for the explosiveness and uncensored message of their sound. They give no fucks about who they rip apart on their journey to challenge the status quo, exposing the injustices of the system in their lyricism.

Since 1993, they’ve developed, nurtured and cemented a unique brand of militancy, violence and protest that never falls on the corny side “conscious” hip-hop. Their sound rides up your spine, it’s hard—it grabs you by the ears to rattle your head as though to say “wake the fuck up.” It fills you with the raw energy of wanting to be heard in a sea of irrelevant chitter-chatter. It’s no surprise that Vinnie Paz, one half of the duo, is a fan of fighting.

Reviews over the past couple of years said the underground crew has given up on their conscious socio-political agenda and let their sound be drowned out by thoughtless, overly-shocking violence speaking to anger without grounds for it. But if we’re honest, do we not live in a world where anger is the only emotion we have left? In this day and age, is anger not the feeling that arises when you flip on the news to see yet another cop being a trigger-happy fuck boy?

Jedi Mind Tricks’ The Thief and the Fallen is a powerful drop and yet another ill step in the crew’s efforts to refine their brand of militant rap. Needless to say, the aggressive sound of Jedi Mind Tricks has provided walkout songs to several fighters, both amateur and pro.

I hit up Vinnie Paz to talk about fighting, about what makes combat sport such a fascinating phenomenon in the human experience, and about the spectacle that is the traditional walk out song.

Fightland: What’s your favorite discipline?
Vinnie Paz: Boxing, man, 100%. My whole life it’s been boxing. Being from Philly made me like that, being around Philly gyms. It’s just the most beautiful sport there is, man.

What makes boxing so beautiful to you?
I believe that, well—this applies to all fighting, so I guess I’m not directly answering your question, but there’s something beautiful about “me versus you.” My will versus yours. Will versus skill. No one to blame, no teammate to blame. This is raw, animal instinct, yet, it is so scientific. So difficult to master. Check hooks, torque in the hips—things that can’t be taught. The greatest fighters in any discipline of fighting, in the history of fighting, did things like that. The greatest fighters did things you can’t teach. There’s a beauty in that.

It’s poetic. George Foreman had a brilliant quote about people who think a specific fight is boring. He said “Boxing is a lot like jazz, the better it is the less people like it.” So you’ll see this beautifully fought fight between two technicians, just trying to outthink each other like a chess game. A casual fan will just call it boring because they don’t know what they’re watching.

Do you box yourself?
I did. I still—I’m obviously out of shape, my eating habits are horrible and my lifestyle not conducive to living the way I should. But yeah my whole life—when I try to get into some sort of shape for a tour, I’ll box, get some sparring in.

Are there any boxers you look up to? Did you train with any of them?
So many Philly fighters were like God to me, man. Joey Giordello, Matthew Saad Mohammed, Bernard Hopkins. I used to see Bernard around Andy Carr’s gym. I’d never step to him, though, he’s a killer. He’s a great guy, but I would never fuck around with Bernard.

Do you like MMA?
How do I say it—I’m not hip to it enough. I’m friends with Joe Rogan, so any names that I know are through Joe. I’m put off by the ground stuff, I think it’s boring, but I respect when someone can tell me I’m wrong. It’s just a particular—it’s just a taste thing. But I mean, the athleticism, the training. Mac Danzig is a buddy of mine and he’s taught me stuff. He would tell me who’s good, but I’ve always been a boxing guy. I’ve always been into the Gracies, from the very beginning, in the early Pride days, the 90s. When they were allowed to beat the dog shit out of each other. I always liked Royce Gracie a lot. I think that family’s full of great people. I like the way they handle themselves and rep their family name and their discipline.

I like Anderson Silva. I saw him break his leg and I almost threw up. I felt so horrible for him man. That dude’s a beast. His hand game is crazy. I was so impressed, I don’t know anything about his training or his regimen but I would assume he put a lot of work in with high-level boxers. He throws straight punches. A lot of dudes I see throw looping shots, and I’ve seen him through crisp, clean punches, right up the gut. I was super impressed when I saw him.

Off the top, what do you think when someone says “Walk Out Song”?
The first thing I think of is Mike Tyson coming out to Welcome to the Terrordome. That’s the most badass, fucking mean, gruesome, grim shit ever in the history of the sport. Seeing Mike coming out to Public Enemy with a fucking gold tooth and a part in his hair. No robe, just a fucking white towel. No socks. Black trunks. A fucking killer.

What went through your mind when you saw that?
I haven’t been able to replicate the feeling of watching Mike Tyson walk out, you know, since he got put in jail. Or how mad my father would get having to pay that money to watch Mike beat the dog shit out of someone in 10 seconds for the pay-per-view. My pops would get so mad.

If you wrote a walkout song for someone, what would it have to have in it?
If someone would ask me to do that—and I’ve had a couple heads ask me to do that—my objective would be to make it aggressive. To remind them that they’re going into a fucking war here. This ain’t a fucking game. You play baseball. You play hockey. You play basketball. You do not play fight. Remind that motherfucker that he’s going in there, and for the time that he’s in there his only thought should be to kill.

If you could have any fighter at all, dead or alive, come to you and ask you to write a walk out song for them, who would it be?
Alive or dead? Willie Pep. Willie Pep in my opinion is the greatest fighter to ever live. The only man in the history of the sport to win a round without throwing a punch. And he fought Sugar Ray Robinson in an attic in Connecticut. Sugar Ray Robinson was a middleweight and Willie Pep was a bantamweight and he fought a middleweight in an attic.

Wait, why in an attic?
No idea. Some people came up with enough money and those two were down to fight and he did it. That’s some real man shit.

Have you ever been in a fight? Are you a good fighter?
More than I’d like to remember. I’ve got a one-hitter quitter in my left hand. By the time I come at them with the hook they’re already falling.

Have you ever heard a horrible walk out song?
Well, it’s not a walkout but when Klitschko wins they play a Tina Turner song and it’s so fucking corny. You know that song, [play-sings] “simply the best!” Remember that song? They play that when Klitschko wins. That’s a fucking mockery.

Check out more My Walk Out Songs: