By Eli Kurland and Josh Rosenblatt 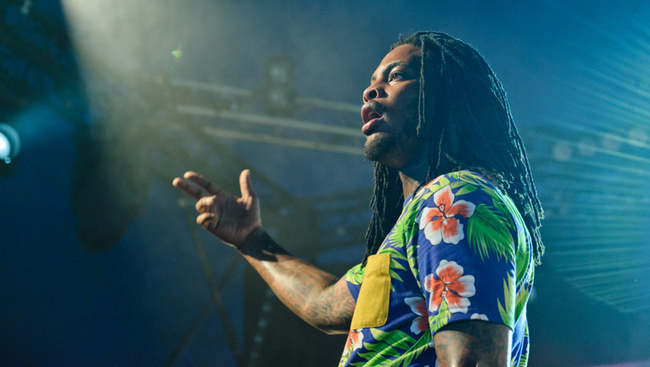 Take one part dreadlocked, full-body tattooed hip-hop entrepreneur; one part 27-year-old Gucci Mane protégé; and two parts party starter/VICE correspondent wrecker–then stir liberally. That’s the recipe for Waka Flocka Flame (or Waka Flocka, for short): friend to the low digits on Billboard Chart’s Hot 100 songs list, and leader of the Brick Squad Monopoly record label. A staple of the hip-hop scene for nearly half a decade, Waka is one of the biggest and best rappers in the game.

But we wanted to talk to Waka about his other love: MMA. After catching him on the Jumbotron at UFC 159 in Newark, New Jersey, we knew we had to get the New York-born rapper on the phone to talk about his friendship with Dana White and Jon Jones, his love of Roy “Big Country” Nelson, the connection between making music and fighting, and, of course, his ideal walkout song.

Fightland: How did you get into MMA?
Waka Flocka Flame: Oh, man. Mixed martial arts? We grew up doing that in the neighborhood. As a kid, you grow up fighting. So when you see it on TV you can’t do nothing but love it.

Did it speak to you more than boxing or wrestling?
Hell yeah. That shit was like my steroids. As a kid, you grow up on wrestling. And then you’re like, “Damn man, when they gonna show some blood and shit.” So when mixed martial arts comes around, you like, “This the fuck I’m talking about.” [laughs]

You fell in love immediately?
Yeah, that shit was instant. When you just see somebody get their arm broke, when they get they jaw punched in, that shit like: Damn! I love it. I like to fight.  When you get to see that shit on TV it’s like a muscle relaxant.

Do you train yourself?
Hell yeah. Every day. I do that “I wish you would” training.

What’s that?
“I wish you would” fuck with me. [laughs]

I know you’re friends with UFC President Dana White, friends with Jon Jones. How do you know them? Did you just meet them at the fights?
I met Jon Jones at the fight. Dana White, he was going back in forth with me, inviting me to a show. From this day forward, I’m going to all of those fights.

So, Waka, if you were a UFC fighter, and you were walking out to the Octagon, what song would be playing?
My walkout song? If I wasn’t a rapper, I’d probably fight. But since I am a rapper, um … Onyx. [Raps] It’s time to get live, live, live like a wire!/ I set a whole stage on fire! That Onyx shit? Oh, god! I just wanna go out there and rip somebody’s fuckin’ head off!

If you wrote a walkout song, what would it have to have?
Energy. Non-stop energy. Don’t matter the words. It’s energy. Like, the attitude--it gotta be a full aggression song. From the one second go till to last second of the song. Straight into the fight--energy, ad-libs, all that shit. Just energy so you’re ready, pumped up. I’ll try to make like vocal steroids.

Does it feel similar when you’re either making music or seeing music live and when you’re watching these guys fight?
Yeah, man. It’s, like, tense. It’s, like, nervousness. You jump up, like, “Ahhh!” And you know I’m a rowdy fan, so I be fuckin’ cursin’, like, “Fuck! Ahh!” On some wild shit. I entertain myself there. People like, “Dude, you gotta chill man.” It’s a high, man. It’s a high nothing in the world can beat.

If you could have one fighter come to you and say, “I want you to write my walkout song,” who would it be?
That would either be Jon Jones or “Big Country” (Roy Nelson).

Why Big Country?
I love Big Country. Big-ass stomach, gets on the ring, he’s rubbin’ his belly. Ah, man, that’s my boy. He about to go hunting animals and shit.

And why Jon Jones?
Come on, brother: He’s the man. All swag. With my eyes, I’ve never seen a man fight that quick. He’s quick. As. Shit.

Is it just like a different experience watching Jon Jones than other fighters?
When you see Jon Jones it’s like he a grown man fighting, you know what I’m saying? He’s what fighting’s supposed to be. You look at him and be like, “Damn, that’s how you supposed to fight!” Just how he fightin’. He whoops mothafuckas’ asses! He do the shit so well, that you be like, “Damn, I gotta fight just like that!”

Check out these earlier installments of our "My Walkout Song" series: