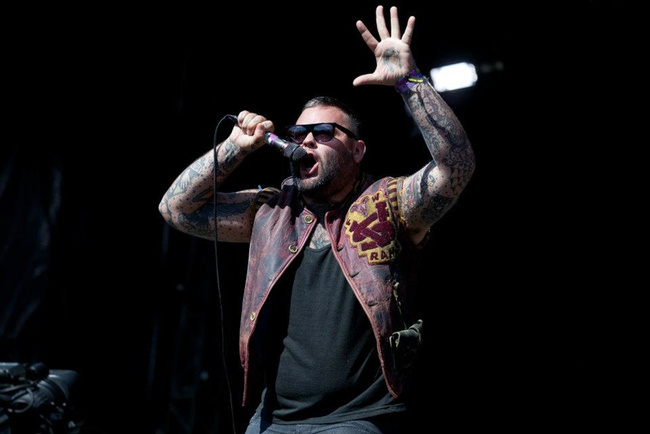 Two gold albums, two platinum albums, and a decade into their career, seminal Canadian post-hardcore crew Alexisonfire announced their split in 2011. Guitarist Wade MacNeil was 27 years old. Rather than burn out or fade away, he replaced Frank Carter as the lead singer in British punk band Gallows. Now, he divides his time between his Toronto home and the English capital.

Fightland: So, if you were an MMA fighter, what would be your walkout song?

Wade MacNeil: For me, it would have to be Blitz’s Razors in the Night.

That song’s pretty short. You’d have to run to the Octagon, practically…

I think just Razors of the Night, hood up, no handshakes with anybody, and straight in there!

How did you get into MMA? Was it through GSP having such a big profile in Canada?

Well, he’s obviously a national treasure, but I think it was when I started doing a bit of boxing training. It’s not anything I’m really serious about, but it’s something that I...  Well, I fucking hate running, so when I’m doing stuff like boxing I can get lost in it. It’s also something I need to do before I go on the road. The same way you need to prepare yourself before a walk out onstage, you can’t just show up and switch it on.

I think a lot of people are very dismissive of mixed martial arts, but if you’ve done anything that has any sort of physicality, you realise how incredible these athletes are. It forces you to look at it completely differently. The more you watch the more you see different fighting styles. It gets to a certain point with certain fighters. Guys like Anderson Silva, guys like Jon Jones, they’re arguably the greatest fighters who have ever lived. They’re on a completely other level.

There are certain things you expect in a fight when guys are trying to gauge one another, and both those guys can look completely untouchable. Their opponents can’t figure them out, and that’s when I think the sport becomes really beautiful.

Is there a comparison between that and making music?

Definitely. As a musician, you start to look at music a bit more critically. You’re creating it, you understand it, so you think, “I see what this person’s doing, I hear The Stooges in this, I hear Mott The Hoople in that, this guy’s writing lyrics that are inspired by Charles Bukowski…” You know? Then every once in a while a record drops that’s so good you have zero idea about any of the reference points and it makes you want to quit being a musician! But, I think usually you put your guitar down and leave it for a day, and then you come back. It’s always that kind of stuff that pushes you forward.

Georges St. Pierre is on-hiatus right now but seems to prefer nightclubs to punk rock gigs. Would he be welcome at a Gallows show?

Absolutely. GSP and his “plus one.” All area access! Then we’d take him out for poutine after the show, which he probably doesn’t eat because his body is a temple…

Do you think he could handle the pit at a Gallows show? Most people don’t make it out without a scratch.

Ok, this is the part where we let you plug something.

The new Gallows full-length is out this fall. In July, we’ll have a new single out and we’ll hit the road!