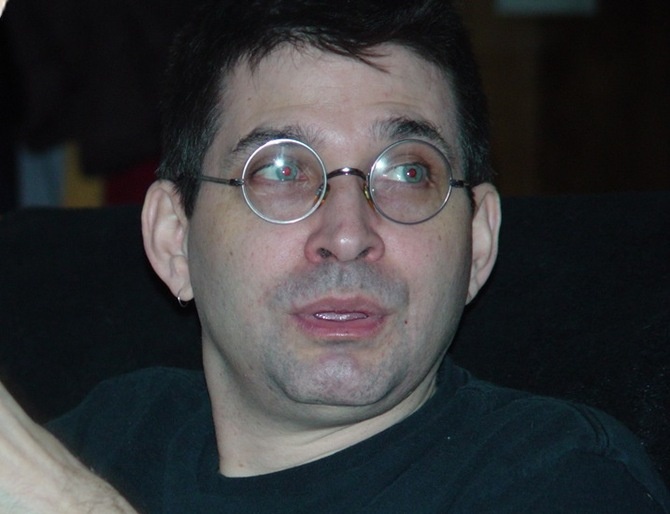 Steve Albini -- guitar assassin in Big Black, Rapeman, and currently Shellac, as well as legendary engineer (he hates being called a producer) of some of the most musically muscular music of the last 30 years (Nirvana, Neurosis, and Roger Plant-Jimmy Page, among dozens) -- has also tried his expert hand at billiards, cooking, and animal husbandry. Well, not really animal husbandry but he’s one of those guys, usually autodidacts, who get great at anything they want to get great at through force of will, bad attitude, and smarts.

So we remain shocked that we’ve been unsuccessful at seducing him into giving fighting, specifically MMA, much more than a cursory, and contempt-filled, glance. His reasons are many and seem to actually make sense from a peace-love perspective. But we’re happy that, despite those reasons, he was willing to give us his hypothetical walkout music. Just amuses us to no end to imagine seeing shirtless Steve in some Tapout shorts, walking down the corridor toward a cage.

Fightland: Why did you choose that one?
Steve Albini: Because I would be facing brain hemorrhage and death.

But what about this or any bit of music really makes it a great walkout tune?
It has to be pretentious enough that the goobers will think it's both stirring and classy but also exquisitely gay so that from an ironic distance it can be admired as camp. There are many options available from the catalogs of both Richard Wagner and the band Queen.

When was your last fight? With fists, I mean.
I punched a guy in the face when I was 14, and we both ended up at the emergency room to get stitches -- him in the face, me in the hand. It was stupid and I'm not proud of it and I've never wanted to fight anybody before or since. I've avoided fighting since then because I'm not an asshole who likes to fight people. I have disagreements with people occasionally, but we settle them by talking. If I find myself in the company of people who want to fight, I leave.

Yeah, but was it, in general, an effective negotiating tool?
It ended the conflict for the moment, but if I could have walked away I would have preferred that. Dude still hated me when it was over, and I don't see how he couldn't.

Fighting is depressing. Just an unimaginable stupidity. It comes from a primitive power impulse, a limbic survivor of the time before language and reason. It isn't noble; it isn't glorious. It's a carnal brutality that I cannot abide. Watching people or animals fight is as base and regressive an entertainment as there is on earth. It makes pornography seem like opera.

I can admire the dedication, training, and conditioning required of fighters, and the finely tuned senses and reflexes required. All of those things are impressive. And these finely honed bodies and minds are put to use not building things or expressing a creative impulse but punching and choking each other until one of them is unconscious or submits. Fucking ridiculous.

So all you are saying is give peace a chance?
Peace is there all the time in the space between arguments. Settling the arguments solidifies the peace. Indulging in the violent impulse doesn't settle the arguments; it suffocates and suppresses them for a while, in the manner of a police state keeping a citizenry repressed, which ensures that the arguments will eventually emerge redoubled.

Check out these other installments of our "My Walkout Song" series: