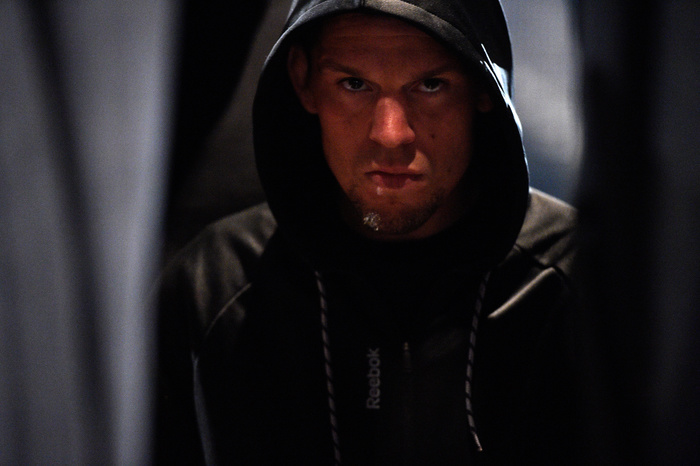 Watching a fight after the fact transforms the experience itself. The tension that comes from watching moments of possibility unfold is replaced with anticipation of seeing historical facts that are already there. Prediction and chaos and uncertainty now have shape. With a little pausing and rewinding, it's short work to find where the end begins.

When Nate Diaz met Conor McGregor at UFC 196 on Saturday night, the end began halfway through the second round. Staggered from Diaz's left hand, hope and joy faded from McGregor's face as Diaz delivered lump after lump, knee after knee, and slap after open-hand slap while eating McGregor's power and remaining just out of reach. McGregor shot a panicked double-leg takedown and Diaz countered with a guillotine to claim mount. The end (of the end) came with a flash of ground and pound, the exposed neck of McGregor, and a rear-naked choke at 4:12 of the round. Nate got up wearing a mask of blood and struck a bodybuilder's double-biceps pose, and the camps from Dublin and NorCal who threatened melees whenever they got too close made peace.

Cue a giddy Joe Rogan asking the winner how he feels. "Hey," Diaz said. "I'm not surprised, motherfuckers." The only surprise, Diaz said at the post-fight press conference, is that he got hit at all.

Never mind that he was the late-replacement underdog, or that he'd recently been on vacation instead of training for a fight. With one win he's gone from being the vanquished title contender who UFC president Dana White once said doesn’t move the needle, who despite 25 fights in the UFC and a reputation for quarrelsome negotiations was still only getting paid 20 grand to show, to one headlining half of a pay-per-view that White said is "breaking every record we ever had" and the recipient of a disclosed half-million-dollar disclosed payout along with another hundred grand in performance bonuses.

Things seemed to change overnight. Really, they changed over the 11 days since circumstance and Diaz's December victory over Michael Johnson made him the opponent of choice opposite McGregor, a featherweight champion making a rare two-division leap to 170 pounds after a scuttled title bout with 155-pound champion Rafael dos Anjos. Those 11 days were rife with shouting about who truly gives zero fucks, face-offs that turned to near-brawls, and boisterous press conferences, including one where Diaz offered an early frontrunner for best insult of 2016: "You're playing touch butt with that dork in the park." Then there was the head-scratching choice to put Diaz and McGregor opposite CNBC anchor Jane Wells, who clearly knew not a thing about the two guys with whom she was talking or how they make a living.

Now, instead of the loquacious Irishman who endured Wells' vacuous questions about pay and net worth with answers that were at least made of multiple syllables, the spotlight is on the guy who unclipped his microphone and walked away. At the post-fight presser, Diaz wondered aloud about when he might get a McGregor-esque promotional push from the UFC, but the problem with Diaz has never been talent, charisma, or a penchant for exciting fights. The problem is politely suffering fools, the nods and winks to fight game salesmanship, the not hitting people outside of the context of a sanctioned fight. Carrying yourself like you're living in a world where everyone is an adversary can also be a liability when you're marketing yourself. Then again, authenticity sells—even when it means being abrasive at inconvenient times—and Diaz has proven his way with words. Maybe he just needs better questions to bring them out.

Without a belt changing hands, Diaz instead stole the post-fight hype that would have been bestowed on McGregor, or at least some of it. There's talk of Diaz challenging welterweight king Robbie Lawler, a fraternal rematch of Nick Diaz's 2004 win over Lawler. "This isn't the fight I'm making—I'm just saying, [Diaz] and Robbie Lawler would make a lot of sense," Dana White told ESPN's Sports Center. "His brother beat [Lawler]. Robbie's now the world champion and Nate became very, very popular tonight. We'll see what happens with Nate, but listen, for me to try to predict what one of the Diaz brothers is going to do, who knows?"

Whatever the future holds for Nate Diaz, today he's the spoiler who snuffed out Conor McGregor's most fanciful ambitions. Ignoring the chorus of buffoons telling McGregor that he always sucked, those BJ Penn-style fantasies of eating his way to championships in divisions where opponents dwarf him by dozens on pounds on their most shriveled days will have to wait. They might never come at all. Instead of soaring through a wide-open sky, McGregor hit his head on a ceiling shaped like Nate Diaz's open palm.