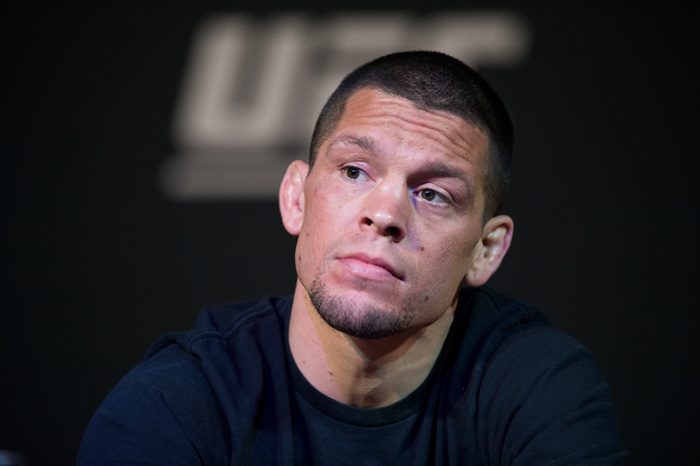 Just over a week ago, in the main event of UFC 196, the Conor McGregor hype train lost a good deal of momentum at the hands of Nate Diaz. Despite a dominant first round, the Irish King ultimately found himself tapping to a second-round rear naked choke.

Naturally, this surprising outcome raises question as to what could be next for McGregor who, despite this welterweight loss, remains the UFC featherweight champion. Perhaps even more interesting to consider, however, is what might come next for the victorious Diaz, whose stock is suddenly higher than ever.

In the wake of UFC 196, it didn’t take long for suggestions as to Diaz’s next step to start burbling to the surface.

Needless to say, a fight with Lawler or GSP would be as big as it gets for Diaz. And given Diaz’s lust for big-name opponents and big-money fights, these potential matchups seem like just the kind he’d jump at. Apparently, however, this is not the case.

In a recent interview with ESPN, Diaz suggested that, while he’d love to fight Lawler or GSP, he’s hesitant to linger at welterweight, as the division has historically been the turf of his older brother Nick, who will soon be emerging from a long, marijuana-related suspension.

“I would have been all about those fights [with Lawler or GSP], and I am,” the younger Diaz told ESPN. “But at the same time, my brother is coming back and those are his fights. Those are Nick Diaz fights. I'm not trying to step on his shoes.”

Luckily, however, Diaz knows that he is not without other options, telling ESPN that he’d be interested in a title fight against lightweight champion Rafael Dos Anjos, who he lost a decision to in late 2014. And really, a return to lightweight is probably a better idea for Diaz than a continued stay at welterweight.

We have, after all, seen Diaz test his mettle at welterweight before, and it has not been especially pretty. While he looked great against McGregor—who is undeniably small for the division—his other recent welterweight bouts have seen him soundly outmuscled by larger, stronger men like Rory MacDonald and Dong Hyun Kim. Granted, Diaz seems to have improved quite a bit since coming up short to these men, but even today, his prolonged success at welterweight seems unlikely—especially against divisional greats like Lawler and GSP.

Besides, it’s not like the younger Diaz would have any shortage of options if he returned to lightweight. Even if he didn’t get an immediate shot at Dos Anjos, which would not be surprising given that the champ currently has several deserving challengers on his radar, Diaz would still have some other exciting fights to look forward to.

He might, for example, be paired with former Bellator champ Eddie Alvarez who, after a razor-thin January win over Anthony Pettis, is looking for an opponent. This prospective pairing would mark a huge fight for both men, and would also produce a clear-cut number-one-contender for the champ Dos Anjos.

If not Dos Anjos or Alvarez, Diaz could also find himself in the cage with the winner of Anthony Pettis and Edson Barboza’s April bout. Such a fight would provide him with just the kind of big-name opponent he desires, and give him the opportunity to erase any doubt that he deserves a rematch with Dos Anjos.

Whatever comes next for Diaz, however, it seems wise of him to shift his focus back to the lightweight division—and not just to avoid stealing the thunder of his older brother Nick.

Though it is fun to imagine Nate Diaz tangling with the likes of Lawler and GSP, he would probably be outmuscled and outhustled by both of these bigger, stronger fighters. There is, of course, no denying Diaz’s boundless skill, or the significance of his defeat of McGregor. Yet it is surely wiser of him to return to the division where his skill will go unhindered by the physical disadvantages he’s seen exposed at welterweight in the past, and the significance of his UFC 196 win is less likely to be deflated by a loss in his next bout.

All this to say that while Nate Diaz’s apparent dismissal of a bout with Lawler or GSP is an undeniable bummer for his fans, it seems to be the right move for his career, as it signifies a return to lightweight, where he is at his best, and some truly exciting matchmaking options await.

For His Sins, Jon Anik Gets a Tattoo of Nate Diaz's Area Code