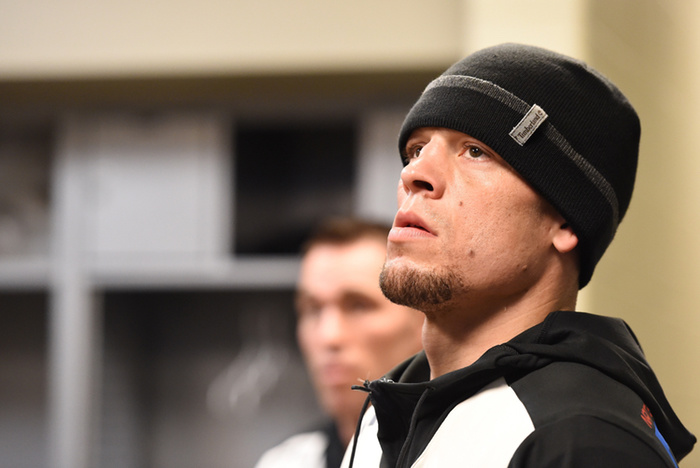 The post-fight interview is a bizarre tradition—alpha males drowning in adrenaline can barely stop their hands from shaking let alone speak in meaningful sentences, yet we've tacitly agreed that it's still worth trying to hear their thoughts on the recent past. On Saturday night, after returning to the Octagon for the first time in more than a year and notching a unanimous decision over lightweight standout Michael Johnson at UFC on Fox 17, Nate Diaz listened to Joe Rogan's familiar line of post-fight inquiry. "This was a beautiful performance against a very tough guy in Michael Johnson," Rogan said to Diaz. "How do you feel about it?" But Rogan's question didn’t jibe with what Diaz wanted to say.

"Fuck that," Diaz said, before laying into new featherweight champion Conor McGregor with an f-bomb-laced tirade that the Fox network sanitized with silence. Fortunately, the Internet holds onto things like these forever:

If the implied purpose of the UFC's events on Big Fox is to showcase MMA's hidden gems to casual viewers, then Nate Diaz gave himself just about the best introduction imaginable. Fifteen minutes of volume punching with impeccable timing behind all those jabs and crosses? Check. Taunting and slapping his opponent and going for a kneebar after the final bell just to prove a point? Check. A profanity-laden speech following a Fight of the Night victory that inadvertently speaks volumes about Diaz's personality and fighting philosophy even as the control room censors blank out almost every word? Check. He has the same oddly compelling combination of pugilistic talent and social idiosyncrasies as brother Nick without the same career-stalling penchant for running afoul of athletic commissions (or at least not as often). Nate Diaz is MMA's national treasure. Love him or hate him, here he is.

Where he goes next is an open question. After the victory over Johnson, Diaz told Ariel Helwani of MMA Fighting that UFC matchmaker Joe Silva said the fight with McGregor is in the making, though McGregor isn't so eager to consider the entreaties of potential challengers. It's a fun idea for McGregor's debut at 155 pounds, even if it doesn’t have the same luster as an immediate title shot. At any rate, Diaz has no intention of dropping weight to fight just any opponent. "When you're just fighting to fight, there's no motivation in that," he said at the post-fight press conference. "I want to fight good fights, big fights that count. When I fought [Rafael] dos Anjos, it was hard—it was hard to get up and train for that fight. He's a really good fighter, he did well, but he was not the biggest name at the time and things didn’t go so well. Now this guy Conor McGregor's coming out and he's doing all this big stuff and everybody's calling him out left and right. I'm not like these guys, begging for no fight. But we're talking about big fights. He wants a big fight, like, we could fight and that's a big fight. And that's the kind of shit I'm talking about: real fights, not funny, fake fights."

This is a familiar dilemma for Nate, and it's played a part in the yearlong gaps that have separated his last three fights: every bout needs to be the right opponent, the right terms, the right timing. But as Nate digs into his 30s, his career can't afford many more long layoffs. When he shows up like he did against dos Anjos last December, he looks flat and lethargic, like the time off was his worst enemy and he only came back to pad his bank account. When he showed up on Saturday, however, he looked brilliant and brash, giving us a 15-minute-and-30-censored-second reminder of why we need him around. While the rest of the world debates the merits of movement coaches, Nate does what he's done for the better part of a decade of surging and stumbling in the UFC: moving forward with punches, grappling with equal parts elegance and indifference, flipping double birds, and never stepping backward.

For now, the limited schedule that Nate Diaz keeps fits his complicated view of fighting for money. When asked if he enjoyed being in the Octagon on Saturday, Diaz said, "Dude, it's fighting. That shit hurts, you know what I'm saying? It's like, fuck, I enjoy getting the job done how it's supposed to be done and going home with the victory. [But] I think everybody up here would probably agree that fuckin' fighting is a motherfucker, man." Even Michael Johnson, only hours removed from being Diaz's mortal enemy for the night, laughed at that one. And for the casual viewers that followed Diaz from the Fox broadcast to the press conference, they got a glimpse of the layers to Nate Diaz: there's ambivalence beneath aggression, and honesty beneath obscenity.