Nationalism and the Martial Spirit 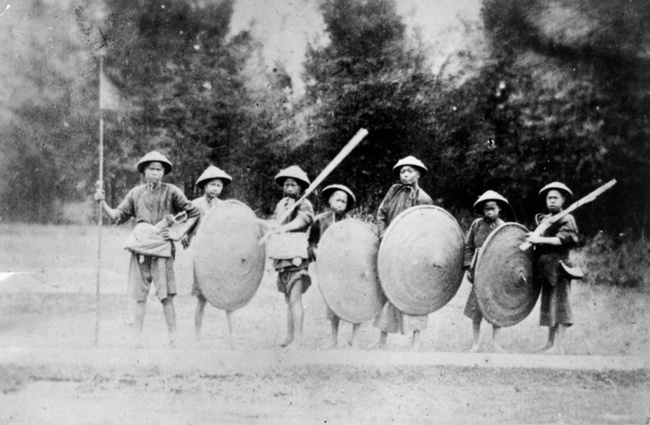 Chinese militia, armed with clubs and wicker shields, during the Second Chinese Opium War, circa 1869

When I was a kid growing up in Germany in the 1990s, it often felt like the whole country had been neutered. The shadow of the Holocaust crept into many a conversation, and made many a word or gesture taboo. The German flag was nowhere to be seen; people would avoid saying anything that might be misconstrued as patriotism or god forbid nationalism. People discussed the war publicly with great shame, and privately with great regret.

But what I saw was much more visceral than that: I saw German men back down from any confrontation, especially with the immigrants pouring in from the former Yugoslavia, Turkey, Russia and North Africa. I saw for a time a government paralyzed by an influx of non-Germans, many of whom could not or would not assimilate into German society. Germans became accustomed to being accosted on the way to school, in the shopping districts. Packs of foreign kids would dare each other to be the one to crack a German boy in the face for no reason, or whistle and insult a German girl. This didn’t happen all the time, and it’s hard to deem those days a true epidemic of bullying, but the tension was palpable and Germans didn’t know—and still don’t really know—how to deal with it.

Suddenly, across German society, fists became the tools of the incompetent man. Germans felt both above defending yourself physically, and  afraid of what the world might say, and what they themselves might  become, if German society were to meet aggression with aggression.  Germany desperately wants to be post-violence. Two world wars and the  horrors of defeat and shame effectively neutered the country, and  inured them to aggression as a tool, or a natural part of being human.  Nothing valuable could come of a revival of the German martial spirit,  better to leave it behind or bury it. So instead, Germany established a host of services meant to tackle the tensions—tensions with foreigners, tensions with the old generation, tensions with the old myth of the Teutonic warrior—through dialogue, research, psychology, handouts, a liberal asylum policy... anything but a show of force.

One of the moments that has stayed with me my whole life happened in 1995, as I was coming up from the subway onto Konstablerwache, a notorious late night hang out for thugs and drug dealers in Frankfurt. A cop was next to me on the escalator, a big German, and we both heard the whistles of the look out and the dealers yelling to each other as they scattered.

This cop looked at me, a young dark haired kid, just like the dealers, and said in anguished tones,

“I wish I could arrest a German, I really do. But it’s always the foreigners... ”

And that was it. Two seconds later we parted ways. I always remembered it, not only because it was so out of character for a German cop, but also because his anguish somehow represented all of Germany’s anguish with itself, with foreigners, and with crime and the threat of violence in normal life.

A lot has changed since then and a lot hasn’t. I still hear stories of German kids getting robbed just for being German, but there is also a whole new generation (two generations!) of Germans whose parents may be from Croatia, or maybe the kids are mixed, or whatever. The youth in Germany today don’t seem nearly as threatened by ethnic tension as back in the 1990s and early 2000s.

The year Germany hosted the World Cup, in 2008, was a watershed year for German identity. Hosting the Cup allowed Germans to be proud of their nation again. And being proud meant asserting oneself—in the international arena as well as in the street. Is it coincidence that MMA rules and regulations were codified in Germany for the first time in 2009?

Was the TV ban placed on MMA a year later inevitable?

Germans and German media are still coming to terms with the sport. In major magazines like Der Spiegel and Die Tageszeitung, the familiar debate is laid out. Is MMA a healthy expression of deeply human needs? Or a brutal bloodsport enriching unscrupulous promoters and gratifying a bloodthirsty populace?

Free Fighting, as it was called for years before the acceptance of Unified Rules in 2009, has been around in Germany since at least the early 1990s. Like in most countries, the more experience Germans have with the sport, the more untenable the “bloodthirsty” argument becomes. Politicians, who once called the sport a hark back to Roman persecutions of Christians, are finding themselves hollering at an ever shrinking audience.

What is true is this: MMA events sell out in Germany. The authorities still enforce a TV ban, and many individual states and cities ban MMA events outright, but there are people on the street who want it. The fighters want it. The MMA crowd in Germany is super hyped about the upcoming Munoz - Mousasi card, not as much due to the fights, but to the fact that the UFC is back in Germany again.

It’s interesting that no one has really discussed mixed martial arts as an outlet for Germany’s martial spirit. Part of it might be the fact that a lot of German fighters are not ethnically German. Part of is also that people still don’t feel comfortable acknowledging what was once considered a given: the German fighting spirit and grand martial tradition. Some fans and fighters in East Germany reportedly brandished swastikas, which, once taken up by the media, touched a very sensitive nerve in German society. A possible fear is that, instead of Prussia and Otto, a revival of the idea of a martial spirit will dredge up Nazism again, something Germans abhor.

Instead, in true modern Germanic fashion, the debate centers around freedom, the spirituality of controlled combat, and the rights of the individual vs. brutality for brutality’s sake, injury and the effect of combat sports on the greater good. It seems that freedom and the spectacle of the “good fight, fair fight” are gaining ground.

The country is still forging ahead, toward something like a post-violent society, and at the same time trying to fit MMA and inextinguishable tendencies of man into that trajectory. 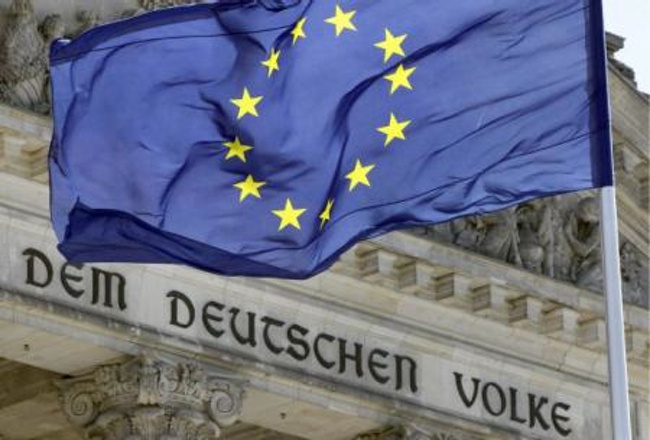 "For the German People"

Something slightly similar, but altogether different is happening in China. The Chinese state spends a lot of time promoting their idea of a “peaceful rise,” in terms of geopolitics, and the image of Chinese people as an inherently peaceful race of people. It’s a narrative that serves them well... as the Chinese encroach on the South China Sea and other parts of the Pacific, they can always meet every complaint with a mixture of “this was always ours” and “we are not the invading type anyway.”

Chinese media love to hark back centuries and claim that all wars in China were the work of Manchus, or Mongols, but never the Han majority. It rings false, this narrative of a peaceful, passive populace toiling along smilingly. But it is true that I can walk on any street in any city in China at any time of the day or night and feel completely, utterly safe. Of course I am a foreigner, so I am immune to the daily instances of small-time violence that pepper the Chinese day. Yet even Chinese know that their country does not have the problems the US, or even Germany, have with random aggression and violent crime.

Whatever the history of China’s imperial wars, the concept that Chinese are non-violent has sunk into the collective psyche.

What this narrative also has done, unlike the German situation, is place the monopoly on force in the hands of the state. Not only will the all-powerful father figure of the Party protect the nation from aggressive, barbaric foreigners, but domestic violence is also state property. Chinese are unarmed, out-manned, and in effect cowed by the power of the state to mete out violence as it sees fit. It’s like an abusive dad telling the world that his family is peaceful and orderly.

When in fact, the state—be it imperial China or communist China—feels the need for regular purges and persecution of the martial elements of society. Today’s Chinese martial arts are bedeviled by politicization, commercialization and sportification.

Again, mixed martial arts arrives on the scene and has an immediate impact. Fighters are fighting for a dream now, and not just a paycheck. In this tiny little clique, much louder than their numbers would suggest, fair fights are lauded and fakery is disdained. I still am not sure if I am placing too much importance on MMA, because it’s the fad of my generation, or if this is really happening.

All I know is that when Li Jingliang beat David Michaud in Las Vegas, the Chinese MMA scene erupted on social media. One of the most telling comments came from Ning Guangyou, a widely respected fighter who lost a chance to compete in the TUF: Macao event because his opponent, Yang Jianping, pulled out at the last second due to a dubious injury.

Guangyou posted several pics of the Leech screaming into the camera and wrote underneath:

”This is what Chinese fighters are capable of! This is a true Chinese man!

Spilling Out of the Mountains: Joining a Long Line of Dagestani Badasses