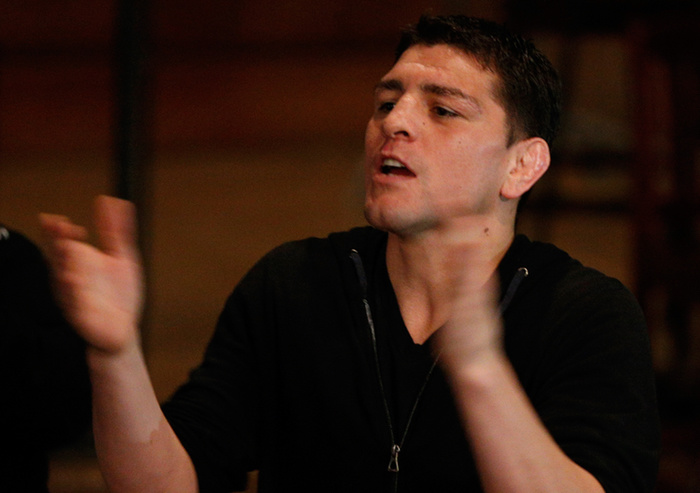 There is no justice in this world, and when one looks around and realizes this, the true artist, the true fighter, the true human being is forced to search for meaning within and only within. Just ask Nick Diaz, the UFC welterweight and fight philosopher par excellence, who returned to eligibility yesterday after getting suspended by the Nevada State Athletic Commission last September for having marijuana metabolites in his blood during his January 31, 2015, fight with Anderson Silva. Silva got popped by the same commission after the same fight for testing positive for steroids and received just a one-year suspension, which means since we last saw Nick Diaz in the Octagon Anderson, Silva—who was on steroids—has fought twice. And though Diaz’s suspension was eventually reduced to 18 months, the fact that we live in a world where marijuana will get you five years away and a $165,000 fine and steroids will get you one year and a deduction in your base pay, and where Brock Lesnar can walk away from UFC 200 with $2.5 million (disclosed) dollars in his pockets and estrogen blockers in his blood, boggles the mind and deflates the spirit. So in a world without justice, and in the midst of moral chaos, men like Nick Diaz have to find a way to control their own destinies.

So what does he do? Well, on his first day back as an employable man, Nick Diaz did the most Nick Diaz think you could imagine, responding with ambivalence to a call-out from newly minted welterweight champion Tyron Woodley. Rather than act like any other fighter and jump at the chance to make his return to the cage a title fight, Diaz hedged and philosophized, calling into question the whole meaning of championship belts in a corrupt world where the only currency that matters is what kind of esteem you hold yourself in, and painting his place in the fight game in starkly existential terms:

"You know what, I always want to fight the best guy, but the thing is I'm on top. I'm the one on top,” he told TMZ. “They're dropping my name. I don't need no fake-ass piece of plastic. Fuck that. … Everybody wants to do a fight with me, champions at 170, champions at 185. I said we can meet halfway. I don't owe nobody nothing. I'm a pay-per-view without a title. I don't need that fake-ass plastic to beat somebody."

For a man who’s fallen victim to the hypocrisy at the heart of the fight game, dismissing that game’s glittering symbol of triumph is an act of both high defiance and self-protection: What the game giveth the game taketh away, Diaz now knows, and it’s every man for himself. So Diaz declared for himself a new standard: He will only fight fighters he considers “superstars.” Fighting anyone else, regardless of how much gold they wear around their waist, would be beneath him. “I’m on top right now. There ain’t no giving me a shot; I’m giving somebody a shot,” he told ESPN.

Diaz then went even deeper, beyond the existential and into the spiritual, scraping through the muck to come up with a moral code to abide by in the depraved world of prizefighting, telling TMZ he’s going to “work on karma” as a fighter now. “I'm not going to go after somebody if I don't have a reason behind it, so as soon as there is some sort of a reason for me to do something that I need to do, then I'll do it.” On ESPN he expanded on this new spiritual approach to match-taking, which is a  reflection and amplification of comments he’s made in the past about the spiritual toll fighting takes on him, about how he has to “hate fighting to love it”: “I’m sitting back. I don’t need a fight. There is no reason for me to come and fight for fun. I don’t do that. That’s not what I do. I don’t like to hurt people for fun.” In the emotionally stunted world of MMA only Nick Diaz would be so willing to rip open his heart and show it to the world.

Which is why it’s so important that he’s finally back. While it’s been a pleasure watching Nate Diaz come out from under the shadow of his big brother these last 18 months and become a full-fledged “needle-moving” star in his own right, as clever and subtle and plainspoken in his way as Nick when it comes to media philosophy and the art of negotiation, the return of Nick Diaz is a cause for celebration because it means the return of MMA’s one true loyal opposition—a man for whom fighting is so deep down in the blood that he even fights against fighting and against the clichéd moorings and uncritical athlete pabulum that hold fighting up: that fighters must fight, that winning a belt validates a fighter’s existence, that a fighter without the desire to hurt others in his heart is no fighter at all. Nick Diaz is the embodiment of the great contrarian spirit in MMA (the spirit that built the sport and sustained it through its early dark years), beyond the reach of bosses, fans, promoters, the media, convention, codes, and the thousand and one other exterior forces conspiring to turn individual athletes into robots in the early part of the 21st century. He’s the fly in the ointment, the wrench in the works, the great refusal, the one who says no. You can keep your Conor McGregors and your Ronda Rouseys and your other “larger-than-life personalities” and boundary-expanding superstars: Win, lose, or never fight again, Nick Diaz is what MMA needs to keep itself honest and true as it grows and explodes and globalizes and sinks deeper into the dehumanizing, deflating morass of American success.

With Suspension Over, Tyron Woodley Wants Nick Diaz Not 'Wonderboy'