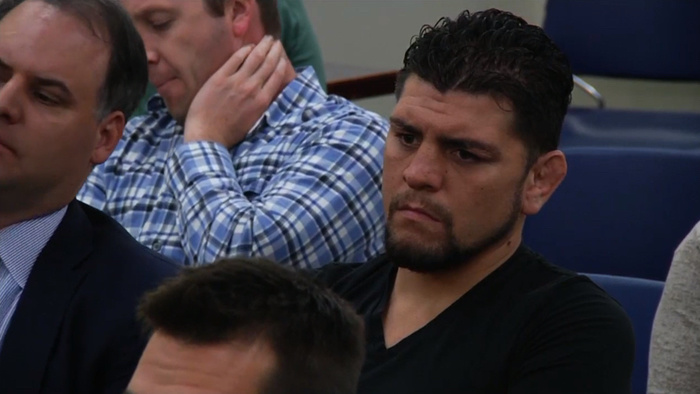 Another Nevada State Athletic Commission hearing happened today. As usual, the deliberations were frustrating and long.

Jake Shields was up first, defending himself against the commission's complaint surrounding his last bout against Rousimar Palhares. Jake waived his right to have representation and explained that he struck Palhares after the bell simply because he had been holding the kimura submission for way too long. The commission played a clip of the incident, and Jake asked for leniency.

The commission seemed to sympathize with him, and in place of a monetary fine, assigned fifty hours community service in or near his residence, which he must complete within six months.

Nick Diaz was up next, for failing a post-fight drug test after facing Anderson Silva at UFC 183. Unlike Shields, Diaz lawyered-up and chose to sit behind the main desk, with the crowd. His defense called upon the testimony of a drug-test analyst who discussed the inconsistency of the three tests given to Diaz—specifically pointing to the drop in concentration of THC levels between the two tests.

His defense also spoke at great length about what they feel are improper testing methods of the state regulators. Since two different laboratories producing different results, Nick’s defense believed that the results should be treated as a negative. There was also a mention that the inspectors had put his name on the forms, subsequently destroying anonymity and creating a possible bias.

Apparently, the NSAC’s inspectors do not follow WADA guidelines concerning collection (like sealing and initialing the sample bottles), which Diaz’ defense team blames for “medically improbable” results. Later, during deliberation, Chairman Aguilar stated that this was due to lack of funding, and that they still trusted their procedure. 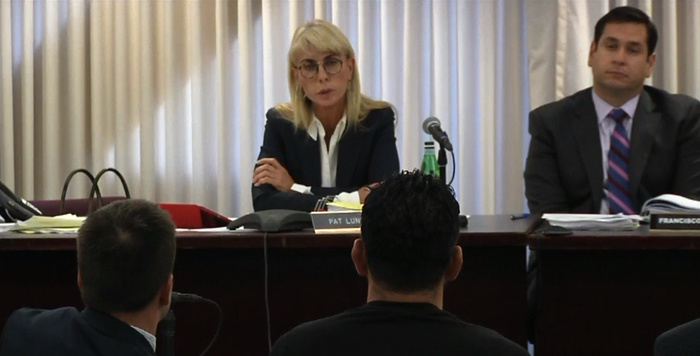 After the defense argued with Christopher Eccles, the Nevada Deputy Attorney General, about the particulars and validity of all the tests, the commission called upon Nick Diaz to speak on the allegations.

“Will Mr. Diaz be testifying?” asked one commissioner.

“He better be,” snapped commissioner Pat Lundvall, who was visibly angry.

On advice of his council, Nick refused to testify, so the commission stated that he would be asked specific questions—and if he didn’t answer them, they had every right to consider his non-responses as a “negative answer” or an admission of guilt.

Commissioner Lundvall started to go down her list of questions (which felt very leading), to which he answered, “Fifth Amendment,” over and over again.

Things in the room got heated, and Nick’s council then asked for the commission stop asking questions, citing that the constitution of the United States and the state of Nevada trump the rules of the commission—and that they were trying to cause a scene in order to humiliate him.

Still, commissioner Lundvall continued and the commission went on to deliberation.

They chatted about the fact that Diaz did not request to have his B-test evaluated, and that his suspensions in 2007 and 2010 for marijuana use showed a “lack of respect” for the sport. Lundvall motioned to take 33 percent of his purse, and a lifetime suspension in the state of Nevada. The less-fired-up commissioners thought the lifetime ban was a little excessive, but nevertheless decided that five years was an appropriate amount.

Anderson Silva vs. Nick Diaz Will Be Ruled A No-Contest