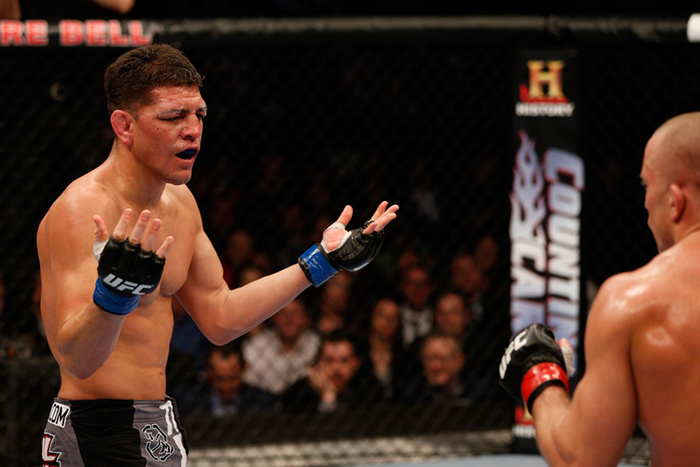 In case there was any doubt that having Nick Diaz back is the best thing that could happen to MMA, look no further than a recent Submission Radio interview with Richard Perez, in which Diaz’s longtime boxing coach confirms what might be Nick’s most bizarre accusation in a career filled with them.

Last week, to celebrate his return to MMA following a ridiculous 18-month suspension for maybe possibly testing positive for marijuana metabolites (and that only after an appeal reduced the initial suspension down from five years), Nick gifted us updates on his fighting philosophy. But lost amid all the talk about refusing to fight anyone who isn’t a “superstar,” finding no pleasure in causing pain, and being indifferent to winning a title belt—that “fake-ass piece of plastic”—was a true gem that showed for all his evolution, Nick Diaz’s paranoia remains a constant, like the North Star. Asked if he would consider a rematch with former welterweight champion Georges St-Pierre now that his suspension is over, Diaz not only reiterated that their first fight, in 2013, was rigged in GSP’s favor and that the champion had been given room to miss weight, he also claimed that an even more nefarious conspiracy had unfolded before the fight to ensure a GSP victory.

"When I fought Georges St-Pierre in Canada, first of all, somebody freaking drugged me,” Diaz told ESPN, raising his already vaunted paranoia to the level of art. Maybe we could have believed, as Diaz claimed after the fight, that GSP’s team had planted a spy in Diaz’s gym in the lead-up to the fight to suss out his strategy, but drugging? Really? Nick?

Well, today on Australia’s Submission Radio, in a true show of fighter-coach solidarity, Richard Perez confirmed Diaz’s story and even took things one step further, saying it was someone from GSP’s camp, or at least someone claiming to be from GSP’s camp, who drugged Diaz the day before their fight. And the plot thickens.

"Oh yeah, yeah, I remember that," Perez said. "Yeah, I was there, and it was Georges St. Pierre’s nurse or something came down and he wanted to give Nick some kind of stuff. And I told Nick not to do it, but he gave it to him … He said he worked with Georges St-Pierre. It was just through an IV.

"I don’t know what it was. I’m not saying that it was a drug or anything, but I just know that [Diaz] looked different [during the fight]."

Perez went on to describe the effect the mystery concoction had on his fighter, saying Diaz was up all night urinating, draining him of both sleep and fluids in the last hours before the fight.

With GSP still on voluntary, possibly permanent, hiatus from MMA, and his notoriously top-notch water-tight public-relations team, as ruthless as any politician’s, still working as hard as ever to ensure the integrity of his brand, it’s doubtful if we’ll ever know what really happened that night in Nick Diaz’s hotel room in Quebec or who the “nurse” was who appeared with that IV or why Diaz, a man who trusts seemingly no one outside his own family, would agree to get hooked up to it. All we know is that as long as Nick Diaz is drawing breath and the world’s microphones are still available, Richard Perez was wrong when he said that the incident was “done” and “in the past.”  Because nothing is ever in the past for Nick Diaz. The world, you see, an eternal recurrence, where every past injustice is repeated over and over again, ad infinitum, forming a tapestry of conspiracy designed to upend the hopes of Diaz and those who love him. And being one of those I’m starting to believe all of his theories are true, no matter how bizarre. If only because it makes our MMA world just a touch more interesting.