Nick "The Tooth" and DIY Surgery 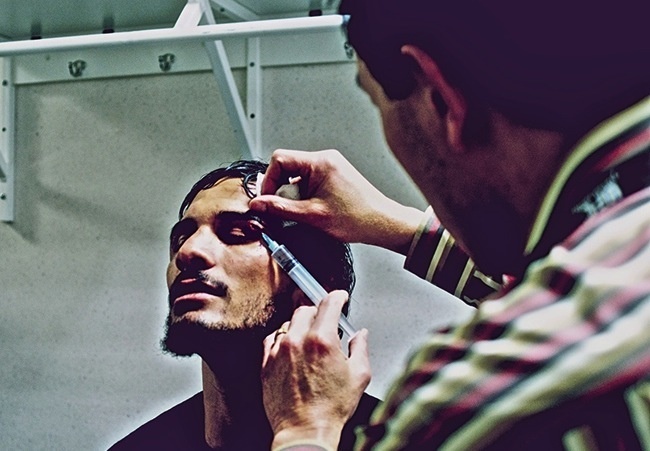 Photos by Nick "the Tooth"

This is how you perform your first surgery.

After getting the call you stroll into his house. You're thinking, a few beers, Call of Duty, maybe a toke--but your buddy says no, you gotta see something. He shoves you in front of the computer. ‘Check this,’ he says, pushing in the chair.

He clicks the mouse, enlarges the YouTube screen, and for 10 minutes you endure the most grisly montage of quivering flesh, suctioned blood, and squid-like guts. Without realizing it, you’re gripping the desk. Licking your dry lips.

You look over your shoulder. Green medical paper drapes the kitchen table. And glinting in the fluorescent light, a silver bowl. A syringe. A scalpel. 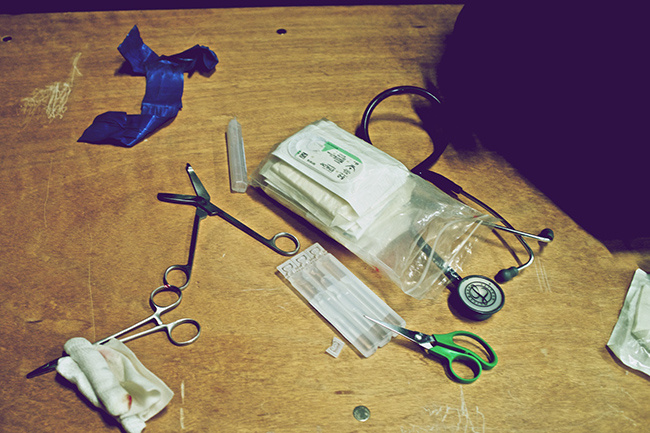 Every sport has its pitfalls. Surf long enough and you’ll likely wipe out so hard a fin will gouge your wetsuit and nearly emasculate you. Skateboard and you'll eat it on a rail, fracturing your wrist. Train mixed martial arts, you might end up with man-boobs.

Here’s the thing about MMA--the kids are beasts. Wrestlers straight from high school, or worse, a Division I college. Muay Thai prodigies that train two, three times a day. But your buddy, he’s in his early 30s. Works in the accounting department at Boeing. No, he never plans on fighting in the UFC, but this isn’t about belts or records, he explains, this is about mortality. This is about the twilight of youth. Everyday he sees the sand slipping through his fingers, and fuck if he’s ready to hang it up and spend weekends tending the garden.

Hell no, for at least a few more years, he wants to bang.

So he tells you ibuprofen isn't enough. BCAAs don't cut it. To keep up with these kids he needs the magic sauce that’s giving them b’acne and more wile than wits.

Pharmaceutical reps call it Oxandrolone, Methandrostenolone, and Stanozolol. You can procure it in just about any sports locker room, for any athletic endeavor, around the world.

Great maxim, you tell him, but as per Fu Manchu, No one rides for free.

If only he’d researched the side effects of steroids on Wikipedia:

Gynecomastia/ˌɡaɪnɨkɵˈmæstiə/, colloquially known as man boobs, is the benign enlargement of breast tissue in males... gynecomastia may arise as an abnormal condition associated with disease or metabolic disorders, [or] as a side-effect of medication.

We’ve all witnessed this condition at the beach, perhaps even this past Labor Day--the elderly Don Juan smoking his cigar, scoping the girls from behind those gold aviators. Barrel-chested and high-waisted trunks. Sweat pouring down his cheeks, his neck, his droopy boobs.

Gross, but natural. As we age testosterone production declines and estrogen seizes the throne, and she starts remodeling the castle. What’s not natural is a non-elderly upping his testosterone via weekly injections. It’s a jolt to the system, and to try and balance the hormonal soup the body increases estrogen production. Which leads to mood swings, insomnia, and gynecomastia.

Now, leaning near the desk, your buddy lifts his shirt and palms his breast like a streetwalker. There it is. A golf-ball size lump moving under his left nipple, turning white when he pinches. 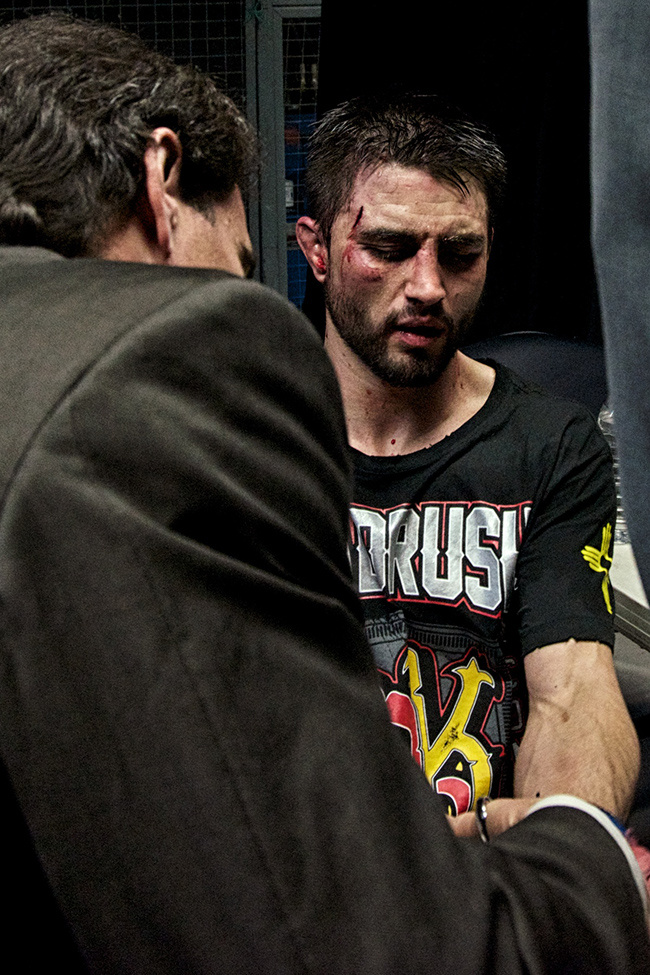 ER personnel will tell you that every year hundreds of Americans perform surgery on themselves. Pulling teeth. Lancing boils. Scraping warts. There are plenty of videos on YouTube. One of my cringe-inducing favs features Dwain Williams, who removes a ‘knot’ from his forehead with box cutters. Even Orphan Black, the critically acclaimed BBC television show, based an entire episode on the self-surgery phenomena.

But mostly, money. Or lack thereof. Those endless monthly bills with their cryptic charges--'EST PT/LVL 3,' 'IMMUNIZ ADMIN,' 'ANCILLARY CHARGES'--they’re the number one cause of bankruptcy in America.

I called Doctor Greg Hsu, the UFC’s backstage ophthalmologist/stitch-doctor, about this so-called movement.

“Are you crazy?” he said. “That’s the dumbest thing I’ve ever heard. That’s like me cutting into my own eye so I can avoid the cost of LASIK--and that’s what I do for a living. Or having you operate on my ear.”

Which is about what I expected. Sanctioned MMA events are highly regulated affairs, staffed with a swarm of medical personnel and emergency units. UFC fighters must pass a full exam--blood work, eye assessment, full physical--to receive a license. They’re evaluated at the weigh-ins, and immediately after the bout they’re hustled into a medical tent for more poking and prodding. Forms are filled out and logged, and if stitches are required, our fighters strut  (or mope) down the hall to Doctor Hsu.

But if you’re reckless and revel in tempting fate you can fight MMA in New York, where legislators refuse to sanction the sport, and as a result unscrupulous promoters stage events with zero medical staff. Or if you’re not feeling so rash, but still want a thrill, jump on eBay and order a DIY surgical kit. For roughly $29 here’s what you’ll get: 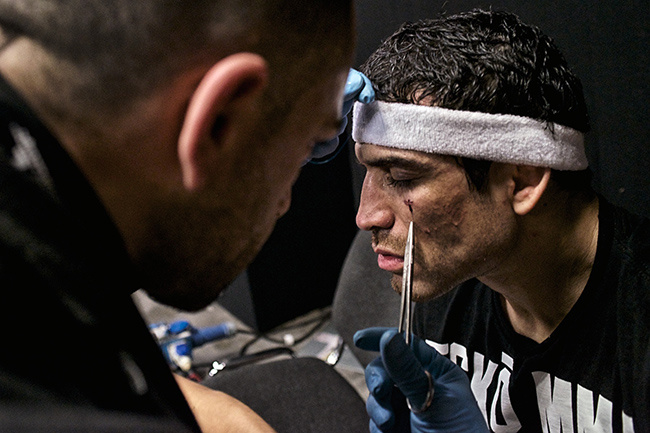 I have to confess that I’m not an advocate of DIY medicine. Yeah, I’ve super-glued deep gashes in my forehead, cuts in my palm, even glued my gushing eyebrow. But that was on the beach, miles from the road.

That was last resort.

Am I alone in my reticence? I spoke with Urijah Faber, UFC bantamweight contender and owner of Ultimate Fitness in Sacramento, and he told me that guys in his gym regularly remove their own stitches. They also super-glue small cuts, but no, he’s never witnessed a full-blown surgery.

Which bring us back to--

Your buddy’s now lying on the table, wearing just boxers. With a red marker he’s drawn a line just below his nipple. He lifts the syringe and slowly pierces the spot, injecting Lidocaine to the hilt. Then he injects another load, just to be safe.

Just in case there’s any confusion, as he hands you the scalpel: You drive, he navigates.

‘Simple? What if I cut too deep. No. I thought we were gonna hit that new map. No fucking way.’

‘Remember last month, when you hit that curb and blew out your front wheel? Who was there in 20 goddamn minutes?’

Ughhhh. Gripping the scalpel, you gently prod the skin. Close your eyes and breath deep. Try and stop your hand from shaking.

This can't be the madness it seem... can it? In the scope of history, you think those nomads had hospitals when they crossed the bearing straits? You think Butch Cassidy, shot up and bleeding, waited in his cave for the family physician? The ice caps are melting. Five, ten years this house of cards comes crashing down. Get with the program.

You push. His skin is tough. Tougher than you ever imagined. You’ve watched every episode of Dexter. Seen countless mutilations. This is your one chance really play doctor.

He grabs your wrist and stares up at you. ‘Bro, you think surfing makes you a man? You think that’s what life is about? Fuck that, it’s facing shit like this. Go!’

If you weren’t so freaked out you’d laugh. His pep talk is ridiculous, and it’s not why you bear down and sink the blade half-way under his nipple.

No, it’s the earnest look in his eyes that says, If you don’t pull this here and now, I’ll forever remember it, just as you will, that in the heat of battle you turned tail and ran.

So you press hard and the skin flays, just like the videos. Inside it’s clean white, calamari strips peeled apart. Which causes you to pause. Reflect. Until blood spurts up your hand and forearm. Sprays and spills down his chest, flowing onto the floor.

You step back, searching for help. A nurse. A paramedic. Someone, anyone. Help.

But it’s just you.

Only now his earnest eyes betray a tinge of fear. He needs you. Like it or not, the test has begun.

You step up, hold your breath and bear down on the scalpel, sawing across the entire line. One, two inches. The spoiled-peanut-butter stench, it’s overwhelming. You backhand sweat from your eyes. ‘There,’ you say.

He pinches the ends, opening the hole wide as a quarter.

‘You see it?’ he says, trying to angle his handheld mirror for a view.

So you probe just under the skin, jabbing away, every 10 seconds flushing the gash with saline.

That lump pressing against his nipple, you thought it was a fatty-marble floating in there, and once you exposed the thing, just a squeeze and it’d pop like a pimple.

You lock the tip with the forceps--you know, the scissors with the roach-clip end--and when you tug, his entire pectoral lifts. Up, down. Up, down. But at least this plugs the hole and staunches the blood.

‘Cut, you gotta keep cutting it out,’ he says.

Pulling the forceps with one hand, you carve around the cyst with the other. Slicing here, stabbing there. After a few minutes you lose yourself in the work. Time ceases. The world falls away. You so missed your calling.

But when you finally free the growth, oh shit, the hole is too narrow. So you tug.

You yank and the gap tears. Holding the peanut-shaped nodule covered in slimly blood, the nodule that you brought this into the world, you feel like a proud papa.

You gingerly place the peanut on the table then turn back to the patient. I mean doctor. He’s covered in sweat, smiling. After washing the wound with iodine and saline, you clumsily stitch him up. Goop on Neosporin and adhere two butterfly bandages. 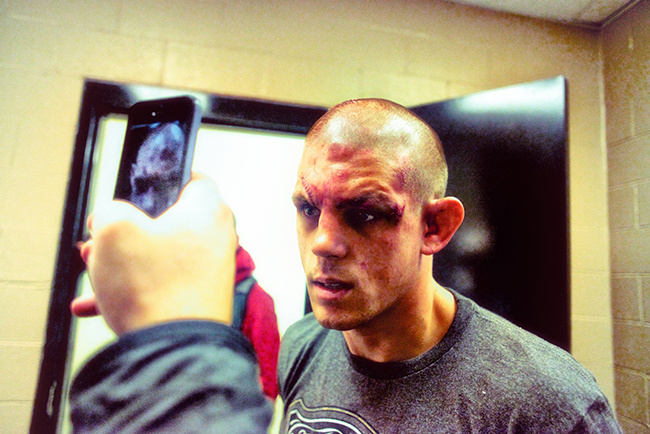 Afterword: This is a true story. It’s been two years since the operation. Six months after healing, our patient/surgeon started taking an over-the-counter anabolic precursor to speed his training recovery. The man-boob returned. This time, he caved-in to his girlfriend’s pleas and sought out a licensed physician. Here’s what might pass for a Yelp review of the second procedure: “That dude butchered me. I’m serious. First he lectured me about how stupid I was then he dug into my chest like it was an autopsy. Some doctors don’t give a shit. We spent, like, 15 minutes prepping and sterilizing my chest, drawing the incision--but this guy, he dove in and carved me up like it was Thanksgiving. Look at this scar [he reveals a jagged Frankenstein line that nearly rings his entire nipple]. Do I have any regrets? Yeah, I do: not doing the second surgery myself.”

The Church of Type