Nick "The Tooth" Talks Steroids, Genghis Khan, and the Folly of Eliot Ness 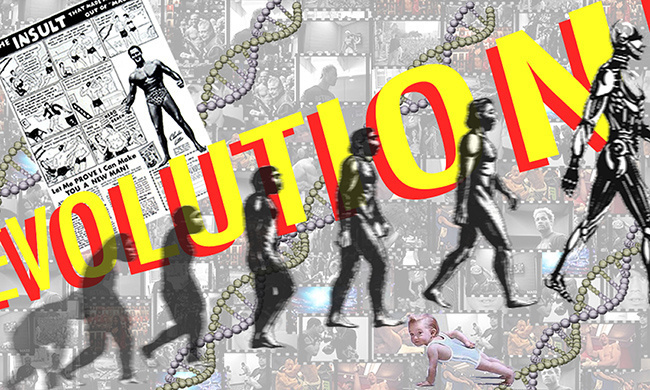 “Anytime you find someone more successful than you are, especially when you're both engaged in the same business--you know they're doing something that you aren't." -- Malcolm X, The Autobiography of Malcolm X

The edge. It's all about the edge.

From microbes in the primordial soup evolving into sea eels, lizards sprouting wings and flying like birds, tree shrews morphing into philosophizing monkeys, everything everywhere seeks that edge. Darwin knew. Lance Armstrong knew. Even Kubrick, with his caveman in 2001: A Space Odyssey bashing in an enemy’s skull with a bone, then cut to a space station orbiting the planet--even Kubrick knew.

Sometimes the best glimpse ahead is back over your shoulder.

1219 A.D, in a remote village on the plains of Western Liao, a woman gathers wood while a toddler crawls at her feet. Thunder quakes in the distance. Along the horizon, a muddy storm rises from the earth. She snatches up the wailing child and runs for the village. She wants to look away, she does, but this is more than an omen. A nightmarish army emerges from the dust. Demons on horses. Stampeding elephants. Rippling flags.

Yet, this wasn’t mere war; this was the exponential march of progress. Sure, Genghis Khan’s expansion butchered upwards of 40 million people--hence the accounts of skulls and bones littering the Mongol trade routes--but it’s just as much a tale of technological mergers and acquisitions, for though he executed whole populations, he spared the engineers.

A wise man knows what he doesn’t know, you might say. And for this, Genghis Khan was a medieval Steve Jobs, always believing there was a better way.  The world’s first tech geek.  When opposing armies marched headlong into battle, his troops rode steed and flanked their enemies with complex battle strategies. His opponents relied on antiquated swords and shields, so Khan showered them with fire arrows, and razed their city walls with catapults and battering rams.

That need for progress continues unabated. Not just for military, but also sports. Today’s elite athletes train at higher altitudes in order to increase VO2 max. They endure cryo-chambers and ice baths to spur recovery. Lounge in pressurized CVAC eggs. Ingest tubs of creatine and BCAAs. Anything to force adaptation to the stress of training. And while they are all eager to endorse the latest protein/diet/supplement fad, mention steroids, human growth hormone, or blood doping to achieve the same goal, and the room goes eerily quiet. Everyone trying to ignore the elephant creaking the floorboards.

Now, I’m not suggesting we start naming names. Let’s leave that to the hypocrites on Capitol Hill. I’m saying its time we stop the witch hunt and ask, How far are we going to push this quest for innovation?

The question is critical because we now stand at the precipice of stunning advances in human biology. Steroids are old news. First synthesized in 1934, testosterone and its ilk predate even those kitschy Charles Atlas kick-sand-in-your-face adverts. Hell, even Hitler shot steroids. As did JFK.

For modern athletics, the reasons for juicing transcends the pursuit of mere mass and strength. Today’s elite athletes, especially MMA fighters, need to hone a multitude of skills in the shortest amount of time in order to best competitors. This is Malcolm Gladwell’s Outliers, where the elite specimens race to accumulate their 10,000+ hours of training. Problem is, those brutal regimens wear on the body. Injuries accumulate. Inflammation builds. Eventually the body revolts and cuts natural testosterone production. Insult to injury (no pun intended), the window for a professional athlete is, give or take, four years. So they need to build that nest egg now.

To counter the trend in doping, in 1975 the International Olympic Committee banned steroids. But this interdiction has been no more effective than Elliot Ness raiding warehouses during Prohibition and busting up liquor barrels to stem the flow of alcohol. A futile effort, if ever. About as effective as America’s trillion dollar war on drugs: Sure the IOC policy catches a few athletes, just as America now boasts the highest incarceration rate in the world (yah, land of the free, with over 2% of our population behind bars), but there’s now more drugs, of higher quality, on our streets than ever. And as for PEDs in sports, well --

"Do you think that we have the science to track those who dope in a sophisticated manner?” asked David Howman, the director general of the WADA (World Anti-Doping Agency). “Personally, I don't think we do. We are catching the dopey dopers, but not the sophisticated ones."

As the cliché goes: It’s not a doping test; it’s an IQ test.

So every time I watch Keith Kizer, President of the Nevada State Athletic Commission bumbling about the weigh-ins for boxing and UFC events, I imagine him wearing an Elliot Ness shirt, thinking he’s actually making a difference.

Okay, I got it, I got it. So, how far are we going to push this quest for innovation?

As we near the much-touted technological singularity, the answer is clear: Far as we can... then a whole lot farther.

Hear that sound? That’s thunder clapping in the distance. Go on, squint into the horizon and you’ll note a few shadows emerging from the dust:

Myostatin Inhibitor. The MSTN gene governs the secretion of myostatin, a protein that naturally inhibits excess muscle growth. However, manipulate the MSTN gene, as did scientists at the Center for Gene Therapy at Nationwide Children’s Hospital in Ohio, and you might just create a super-human. Or, in this case, a super monkey. The researchers in question used a virus to implant the human follistatin gene (which blocks the secretion of myostatin) into macaque monkeys, and without any stressors the monkey-muscles muscles grew 25% biggerand stronger.

Think manipulating the MSTN gene only works on primates? Think again. Markus Schuelke, a researcher at Charité-University Medical Center in Berlin, spotted a newborn with freakishly muscular arms and thighs. Lo and behold, he tested the kid and found no myostatin in his blood. At 4 years old the kid could hold two 7-pound dumbbells out from his sides. Oh, and guess what, the mother was a professional sprinter.

Genes--it’s al about genes. Steroids? They’re so 1950’s. Think of hormones as a plowshare, when what you really want is a dagger. Hormones, such as testosterone, trigger countless side effects: man-boobs, bad cholesterol, shriveling testicles, kidney swelling, liver damage, etc.

But EPO frequently triggers severe cardiovascular problems, sometimes resulting in death. Still, despite the dangers, EPO has become the most successful bio-tech drug in history, with global sales reaching $10 billion per year.

Enter Fibro Gen, Inc., a pharmaceutical company that recently announced phase III clinical trials of FG-4592/ASP1517, a gene therapy that (similar to a myostatin blocker) signals the body to continue producing red blood cells when they aren’t needed. The upside vs. EPO? FG-4592/ASP1517 is still in human trials, so guinea pigs beware--but so far, after seven human trials, there have been no heart or blood pressure issues. All the pros of EPO, with none of the cons.

Though not yet federally approved, “cardio in a pill” is already available on the black market.

However, before you rush off with that wad of bills, you might want to save up for something truly mind-blowing.

Transgenics. HG Wells wrote The Island of Dr. Moreau in 1896 to protest the vivisection of animals. In the book, Dr. Moreau, a mad scientist, cobbles together humans and animals via painful experiments. The success rate is spotty at best. Leopard-Man, Hyena-Swine, and the rest of the Beast Folk, they all struggle to evolve.

Luckily, we’ve mapped the genome and modern researchers are diligently playing God, injecting genes from this animal into that plant, and that species into another. They’ve cobbled together glow-in-the-dark cats. Environmentally friendly cows that fart 25% less methane. Pigs that crap less phosphorus. Goat merged with spiders, so their milk yields spider-web protein for bulletproof clothing.

Don’t think for a second civilians won’t also go there. Just look at the current body-mod subculture: sub-dermal magnetic implants, RFID readers, cameras swapped out for an eyeball. The evolution continues unabated, and there’s no stopping it. Just look to the 40 million slaughtered by Genghis Khan’s tech fetish.

Anyhow, back to sports. For a moment let’s assume that Keith Kizer and his bumbling bureaucrats successfully ban this next wave of unnatural selection. Today, we mortals gather in the arena and watch elite athletes battle inside the Octagon. But 10, 15 years, as scientists decipher the human genome and big pharma reaps countless billions hawking the resultant wares, it’ll be us, the super humans--lean, cognitive geniuses, fast as cougars--watching the comparably pale, weak mortals gasping for air.