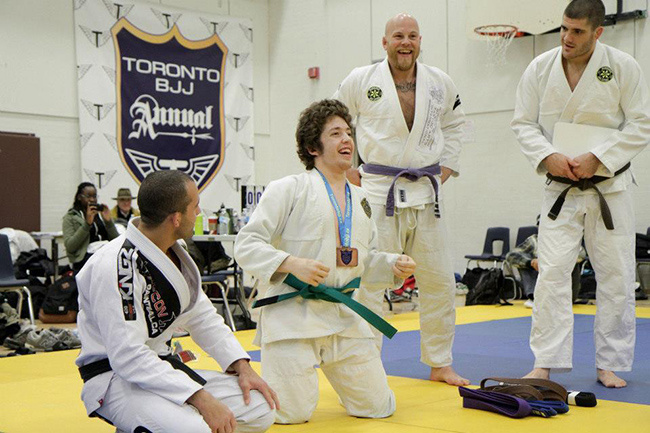 (The author, second from left, gets his green belt)

I imagine few people can pinpoint the exact moment that changed their life, but for me, it came down to a single conversation:

Me: “Uh ... hi? I'm calling because I'm looking to sign up for Brazilian jiu-jitsu.”

Gavin: “Well, you've called the right place. We can certainly sign you up for a free introductory lesson and get you started on our 30-day free trial. What day would you like to come in?”

Me: “Wait! I have a disability. It's cerebral palsy. I mean ... I can walk and everything, but is that going to be an issue?”

Did you see that? I disclose the cerebral palsy and he just grazes right over it like it was nothing. What is this? Usually as soon as those two words leave my mouth I hear a deflated “Oh” at the end of the line before I'm told in the nicest, most saccharine way that either they can't do anything for me or I will have to do a lot of legwork to put their mind at ease before they’ll at least let me try it. Sometimes I get my chance, but it usually ends with them pulling me aside and telling me how inspiring I am or how I'm their hero or some shit, before explaining very gently and slowly that they're concerned about liability and they don't want to see me get hurt.

Not this guy. It was like I couldn't have told him anything more innocuous.

I got off the phone and immediately dismissed it, though: “Aw, he probably just doesn't grasp what I'm talking about,” I thought. “He probably was a little too eager to make the sale.”

What did it matter? The appointment for my intro lesson was set and the conversation was over. I was in! Sure, they'd probably freak out and speak in hushed tones amongst themselves as soon as they saw what they'd really invited into their gym, but I'd cross that bridge when I got to it.

But that bridge never needed to be crossed, Luke brought me into the fold immediately. He gave me the customary tour of the facilities and every instructor and student I passed stopped what they were doing and introduced themselves. It wasn't just a sales tactic--everything about these people felt genuine and familial.

Then, it was time to step into the office. “Here we go,” I thought. But, just as I was preparing to make yet another case that I was worth taking a chance on, the tables abruptly turned and he started interviewing me.

“Why are you here? What do you want out of this?”

I was so focused on having to defend my right to be there, as I had in so many other places at so many other times in my life, that I hadn't really thought about why I wanted to be there. Before that day I had only known Brazilian jiu-jitsu as the martial art of choice when a UFC fight goes to the ground. The one that uses leverage to hyperextend your limbs and gradually choke the breath from your lungs until you tap out or pass out. What could possess a guy with a severe physical disability to pursue an art where that was the end goal? Was I insane? Did I have a death wish?

Writing is a lonely business. I spend a lot of time in my head and the better part of my days either sitting on my ass in front of the computer or sitting on my ass driving my mobility scooter. And by the winter of 2011, it was starting to show. I'd gained a lot of weight and was absolutely exhausted most of the time, even though my day's most strenuous activity was walking the few feet from my kitchen to my desk.

My family was starting to worry, too. That Christmas I'd gone home to Vancouver and my father had tried his own brand of negative reinforcement to motivate me. He left out a newspaper article for me to read about how laziness could lead to obesity and death, making sure to underline the relevant passages. Thanks Dad!

It wasn’t always like this. For the first 18 years of my life, I couldn't have been more active. Every week I went to physiotherapy, swimming, therapeutic horseback riding, and wheelchair basketball in the fall and winter and wheelchair track and field in the spring and summer. I tried every adapted sport known to man.

Now, nine years later, I needed something more motivating than the gym. I'd thought about martial arts before, but I knew I didn't have the balance to strike and move completely unassisted without falling. Not to mention that someone would be punching my ever-so-pretty face. Then I heard UFC commentator Joe Rogan and BJJ black belt Eddie Bravo talk jiu-jitsu on the Joe Rogan Experience podcast and everything changed.

Rogan and Bravo were talking about how BJJ capitalizes on having a lower centre of gravity and how most of the action starts from the knees. I don't know why I hadn't realized it before. Most of my strength is in my upper body and I have better balance when I'm lower to the ground. Maybe I had finally found a martial art that would allow me to compete with able-bodied people on a somewhat level playing field with little to no adaptation.

In fact, I found out later that Brazilian jiu-jitsu was originally created as an adapted sport. Professor Jorge Britto, Toronto BJJ's 2nd degree black belt head instructor, told me that when Helio Gracie started teaching his brother Carlos's judo classes he found that many of the moves required brute strength, something he found difficult to pull off with his small frame.  As a result, he created BJJ as an adaptation of judo to his physical strengths, allowing smaller or seemingly weaker practitioners like me the opportunity to defeat larger opponents.

As a martial artist with cerebral palsy, nothing is more satisfying than telling some alpha male in an Affliction shirt that I do Brazilian jiu-jitsu and watching his head explode as he struggles to process the information.

But I've been throwing pipe bombs at the traditional view of people with disabilities for as long as I've been alive. I've always been a space monkey. When rhizotomy was still an experimental surgery meant to relieve spasticity in children with cerebral palsy, I was one of the first kids on the operating table. When a balance frame called The Spider was built to adapt snowboarding for people with disabilities, I was one of the first to try it.

But being the first at my gym to attempt anything wasn’t going to grant me any favours. The first time I trained under coach Britto, he made me a promise: He wouldn’t treat me any different than any of his other students just because I had cerebral palsy. You'd often hear him scream it from the sidelines as I rolled: “No easy life!!!”

Sure, my warm up is different than my teammates’, but that's only because I can't run with one of them on my back. I'm not doing some watered-down conditioning program. I'm slinging kettle bells, chucking medicine balls, and wrestling training dummies just like anyone else.

The merciless nature of jiu-jitsu is what attracts me to it. Jiu-jitsu doesn't forgive you if you don’t reach deep enough on the collar when executing a cross-choke. If you can't get your hand behind your opponent's head deep enough, you'll never get the choke no matter how hard you try--the damage truly is in the details. You always know where you stand with jiu-jitsu. It’s not duplicitous and it will not lie to you in an effort to spare your feelings. The way people do.

Even on the mats, where my teammates have my best interests in mind, it's really difficult to know whether I got a certain advantage through my own efforts or if they just gave it to me because they could see I was trying so hard. I try not to think that way and I remind myself that it doesn't really matter anyway, but it's not always easy to stay present. It’s hard to silence the self-doubt and pessimism in my head because, in addition to showing me what I’m capable of, jiu-jitsu has shown me just how vulnerable I really am. I'm now keenly aware of the realities of my disability in a way I had never been before.

Outside of jiu-jitsu I’m able to walk between worlds and skirt the line between disabled and able-bodied. Sure, I use a mobility scooter to get around, but I’m not confined to it and I can hop in an out at will. Accessibility has never been an issue, either. I can walk up and down stairs to the point where sometimes it slips my mind whether a particular building is accessible or not. I've been able to adapt so well to the world that my disability never really rises past occasional annoyance.

But on the mat, the small physical deficiencies that I compensate for on the street matter in a big way. For example, I can't cross my feet to close my guard or lock in a triangle choke. Those small muscle groups are too tight and cerebral palsy is all about not being able to send messages from the brain to the muscles, so thinking about doing an action and actually doing it are two distinctly different things. I can visualize a move all day, but being able to execute it may take hours and hours of repetition. Sometimes I just can't do it, period.

So those sounds that most of my teammates assume is pain when they're rolling with me (“Are you okay?”) are actually just audible expulsions of my frustration. There's nothing quite like knowing a triangle is coming and knowing how to defend it but still getting caught to make you briefly re-evaluate your life choices. Imagine trying to bump-and-roll a guy who has mounted you and getting all the steps correct but not being able to do it because you simply don't have the strength to lift your ass off the ground while he's on top of you.

Other times it feels like I'm practicing BJJ on a teeter-totter and I will lose my balance at a moment's notice. I know intimately what it feels like to escape one submission and not even be able to catch your breath before you've literally fallen into another. I'm still just surviving. I have yet to master recognition and anticipation. I literally have to retrain my body to react in different, safer ways by expelling years of physical-therapy programming.

This is probably the point when some reader will step in and reassure me, “You're too hard on yourself, man! Everyone goes through this type of thing and all of these things will come with time. Look how far you've come. You’ve improved so much and you have a disability.”

In a way, they're right. But, my goal is not to be good at BJJ as someone with cerebral palsy. I want to be good at jiu-jitsu, period. I don't view any roll on the mat as a fight against my opponent; really, it’s always a fight against myself. My real challenge is overcoming a body that gets in my way and learning how to work with it under a new set of rules. Adaptation can be tricky when you don't know what you don't know and you're not sure what your body can and can't do yet, but I’m trying to listen to Professor Jorge Britto, who told me just last week, “Don't try to adapt yourself to jiu-jitsu. Instead, let jiu-jitsu adapt itself to you.”