No Tough Test for Joseph Duffy Despite Looming Free Agency 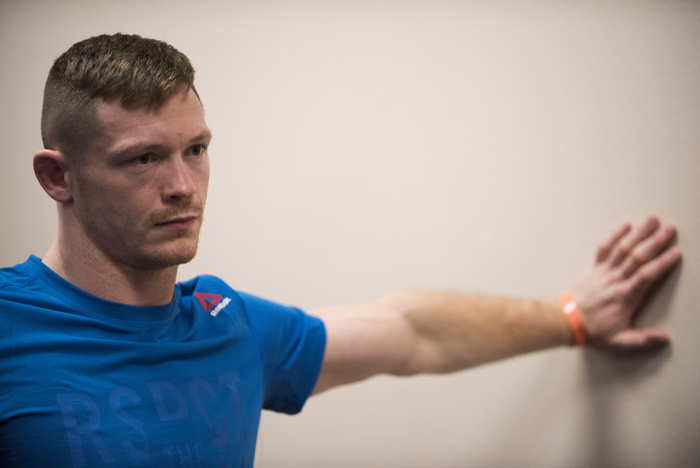 In an interview published earlier this week on the42.ie, Irish lightweight Joseph Duffy told Paul Dollery that he wasn’t happy with the contract extension UFC have offered him.

‘Irish Joe’ also revealed that despite being offered a spot on the upcoming Belfast card on November 19, he didn’t sign for the fight, as he wasn’t happy with the standard of opponent that the promotion had in mind.

Duffy is 3-1 under the UFC banner and his next outing will be the last on his current five-fight contract. His three wins have all come by way of stoppage in the first round and his sole loss saw him become the only man who has lasted the distance with Dustin Poirier since ‘The Diamond’ moved up to lightweight.

After getting back in the win column with a stunning first round knockdown-to-submission victory over Mitch Clarke, Duffy is ready to establish himself in the lightweight rankings. However, the Irishman doesn’t believe that UFC has offered him a contract that reflects his growing status.

“No, I’m not close at all (to signing a new deal),” said Duffy. “I have been offered a new contract to sign but I don’t feel like I’m valued. The negotiation seems to be a case of take it or leave it.

“I’m not asking for a massive increase, just what I believe I’m worth as a professional mixed martial artist. It’s definitely looking like I will be testing free agency, but not by choice.”

For a lot of fighters who reveal their intention to test free agency, UFC often gives them a very stern test for their last fight.

Whether to build another fighter off the exiting fighter’s name or simply to blemish their record as they transfer to another organization, Josh Thomson was handed Tony Ferguson as his parting gift and recently, Rory MacDonald was given a date with Stephen Thompson as a farewell.

According to Duffy, the world’s flagship promotion only offered him an opponent that would have done nothing to add to his goal of scaling to the top of the division.

He said: “Of course I’d be very disappointed to miss the Belfast card but I just feel that the fight I was offered didn’t make sense. There was no real upside to the fight for me. With it being the last fight on my contract, I feel there’s no benefit for me in taking it.

“This is the fight game and at this level, every fight I take has to mean something to me in more ways than one. I’m training hard and I feel great. I’ve never been more focused than I am right now so I guess it’s just a matter of waiting for the right fight for me.

“I want names that mean something and I’m ready to start my training camp as soon as that happens. If it’s Belfast then it’s Belfast, if not then so be it.”

Currently, UFC has no fighters from Northern Ireland signed to its books. UFC Belfast would have been a dream come true for Norman Parke, but unfortunately, the Next Generation man was cut earlier this year.

Although honorary Irishman Gunnar Nelson has already been slated for the main event of the card in his fight against Dong Hyun Kim, fans all over the island were hopeful that Duffy would face another top-tier test at the SSE Arena.

Aisling Daly recently injured her knee, which ruled her out of a clash with Michelle Waterson in Hamburg, and it is unlikely the former flyweight world champion will be back in action by November. After getting one of the biggest ovations of the night in Dublin last October, ‘Ais the Bash’ will be sorely missed on the card.

The only other active Irish fighter on the roster apart from Duffy is cult hero Neil Seery. The 37-year-old is confident that he will get a fight on the card and expects an announcement soon on who is opponent will be.

Artem Lobov is considered Irish by many given the years he has spent living in the country, and 'The Russian Hammer' is also hoping to get a fight on the November 19 offering.

The Belfast card definitely still needs some home talent and fans will be utterly devastated if the exciting lightweight is not given a spot on the card. As many expected another ranked opponent to greet Duffy in Belfast, it feels like one of the higher-level matchups will be missing from the card if he isn’t on it.

The last UFC card on the island had its co-main event and the main event pulled within two weeks of the show, with Duffy being forced off the card when the promotion discovered he had suffered a concussion. The Irish fans have already lost out on a chance of seeing Duffy once under the UFC banner, and the community was hopeful that the promotion would book him again on its return.

The event is only nine weeks away and surely there will be some more fights announced very soon.

Forecasting UFC Belfast: They Owe the Irish a Good One