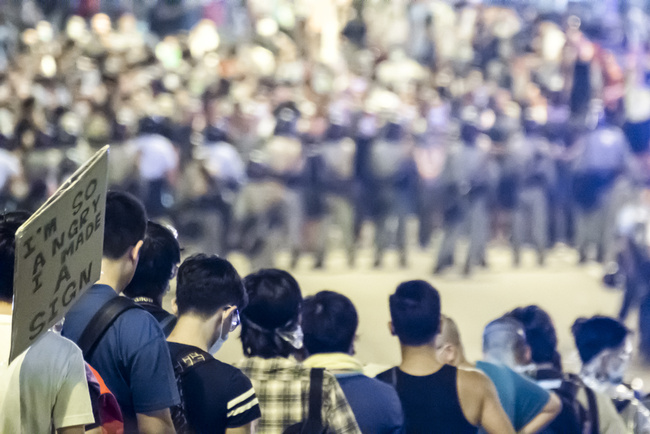 Hong Kong was once a haven from the brutality that periodically ravaged Mainland China. If you made it across to the New Territories, no one was going to string you up and enslave your family, no one was going to raze your home and parade you through the streets with a “capitalist pig” placard across your chest, and you and your family would be able to do business, travel, and pursue some happiness with minimal interference from cruel, capricious authorities.

That haven was bum rushed by pro-Beijing thugs on Friday night in Mongkok, a district of Hong Kong, who tore down pro-democracy protesters’ tents, surrounded the young students who made up the bulk of the Occupy Central movement, and bullied them deep into the night.

Beijing’s violent intervention into what may have been the most polite anti-government protests ever marks the end of Hong Kong’s special umbrella status, a status that goes back centuries, to at least the end of the Southern Song dynasty in 1276. The Song were without question the most advanced civilization of their time, and it took the Mongols almost a century to break them down. But break them down they did, and when the child emperor escaped, he headed for Hong Kong (where he eventually drowned... or escaped to lead the shadowy White Lotus Society). 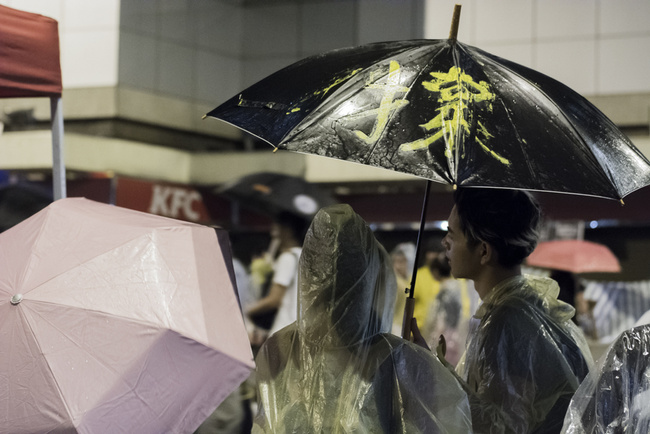 When the weirdly Christian Taiping Rebellion put China to the torch in the 1850s, everyone who could move packed up their woks and spades and headed for Hong Kong. When the Japanese invaded, Hong Kong once again was the safest place to be, if you couldn’t get out of China altogether. After the massacre at Tiananmen Square, Chinese dissidents made a B-line for Hong Kong. If I ever get called in by the police for some reason, I’m crawling under the fence between Shenzhen and Hong Kong and hiding out on Cheung Chau.

Chinese martial arts as we know it today owes everything to Hong Kong, the Umbrella of the East. Praying Mantis, Hung Gar, and a bunch of other Southern Fist forms arrived in Hong Kong, in the hearts and minds of China’s political refugees and economic migrants. China’s own gypsies, the Hakka minority, driven out of the north ever further south, were particularly skilled in Mantis and other forms. All of these outcasts and vagabonds found fertile soil in Hong Kong, away from the convulsions of the Mainland.

Ip Man, the kungfu godfather, moved to Hong Kong in the first decade of the 20th century, because any Chinese who could get out of China and into British-controlled Hong Kong had a chance at a much higher living standard, much like Nicaraguans slipping across the New Mexico border today. He stayed there during the Sino-Japanese War, no matter what the revisionist Chinese historians like to say about his role as a freedom fighter, officially immigrated to Hong Kong in 1949 after the Communist takeover, and kept his head down during the subsequent purges of everyone and everything over the next thirty years. 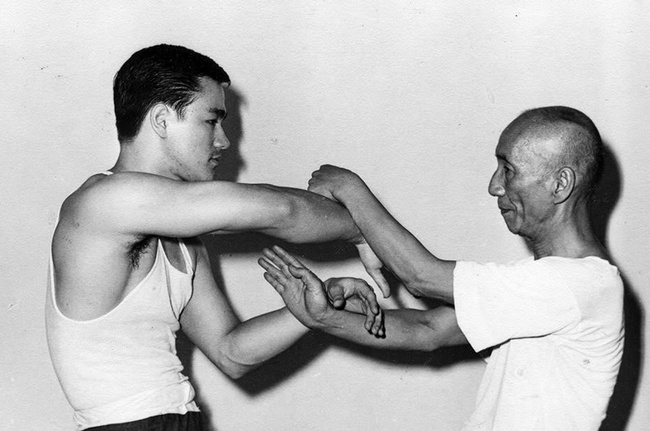 Had Ip Man stayed in China, we wouldn’t have Bruce Lee, Wing Chun, or the modern idea of MMA, as reflected in Bruce Lee’s Jeet Kun Do philosophy.

Today, Hong Kong’s traditional martial arts scene has shifted into stunts and movies, but is no less authentic than it was a century ago, when Ip Man first arrived. Guys like Jackie Chan and Mark Houghton are the real deal, their kungfu is solid and their lineage unvarnished by hyperbole. They were spared the eviscerating fist of the Communist Party, and don’t have to invent lineages and legendary masters, don’t have to water down their skills or whore themselves out. Hong Kong’s martial tradition has the luxury of being unbroken for at least 100 years, and that is something most masters on the Mainland wish they could claim. Here is an interesting project, The Hong Kong Martial Arts Living Archive, that spells out how and why kungfu survived intact in Hong Kong, as opposed to being fractured like the styles on the Mainland.

The UFC has their events in Macao for a reason. The regulatory framework, high quality services and infrastructure, and a very pleasant tax rate make Macao and Hong Kong the ideal location for casinos, sporting events, and business of any kind. There will eventually be an event in Mainland China, but the process is such a morass of corruption, obfuscation and bullshit that the UFC might just scurry back to Macao and never return, China market be damned. 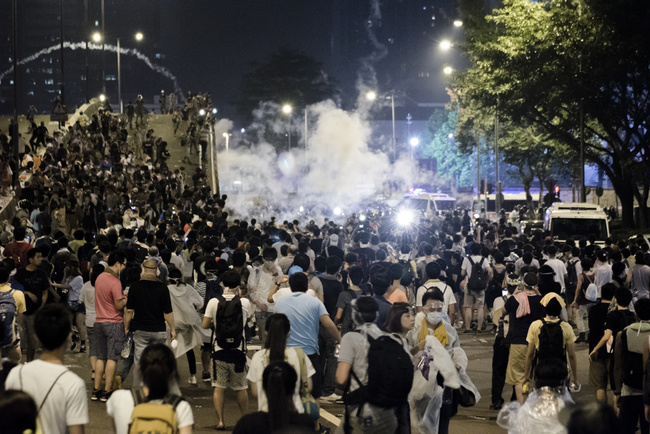 With the violent climax to the Occupy Central protests last night, Hong Kong’s safe haven status may be in jeopardy, but not necessarily the business side of it. Conservative viewpoints point out the desire of both the Hong Kong elites—exemplified by Chief Executive CY Leung and his daughter—and their Beijing puppet masters to maintain the status quo. What’s the status quo? Top five in lifespans and per capita income, a free port with a tax scheme that puts a smile in the face of corporate suits and traders alike, and just enough democracy to make it seem representative, without really being so.

Beijing wants Hong Kong to shut up and keep making money. Hong Kong’s pro-democracy camp wants true freedom, an “unfiltered democracy” that allows for universal suffrage and direct elections of the Chief Executive. Right now, the Basic Law that governs Hong Kong under the “one country, two systems” rubric allows for an election of 2-3 candidates, handpicked by a handpicked committee. The committee must be “patriotic” and “love China” which is Commie-speak for “chained to Beijing like a gimp,” which is what has the students, scholars, and artists out in the streets occupying Central to begin with.

It’s instructive to look at the Mainland reaction to the Hong Kong protests. Beijing relies on a deep-seated resignation and acceptance of the Party’s power to control 1.3 billion people. The entire “freedom” narrative is met with a blank stare in Mainland China, from most people, or at best with a phrase the Communist Party loves to hear more than any other: 没办法 which can be translated as “no hope, no solution, no way out”. This is the Mainland mantra when it comes to any struggle for political or social justice. 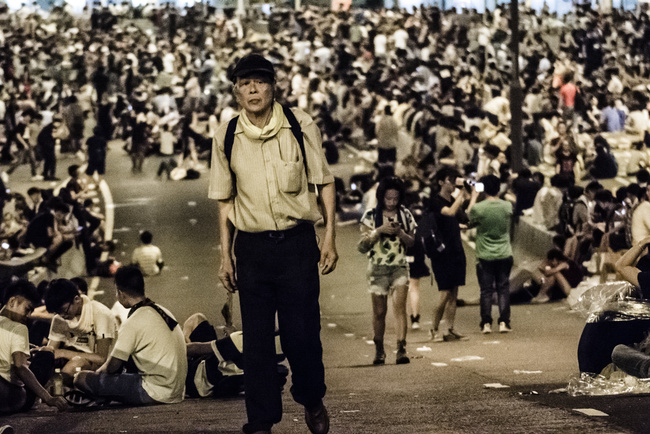 In a way, most Hong Kongers saw it that way as well, even if they hoped, yet again, that thousands of people marching peacefully would somehow work this time. There was no chance of any real resistance to the pro-China thuggery that Beijing was eventually going to pull in order to establish full control over their favorite little money maker. Hong Kong is a peaceful city. A city built on free credit and customs cash from products leaving Chinese factories and headed out to American homes. There is a conflict over the soul of Hong Kong, but the conflict will not be a clash of two violently opposed ideas. The thing is, Beijing is willing to call out the thugs, whereas Hong Kong’s martial legacy is just that, a legacy, and one with no taste for street brawling in the name of liberty.

Jeff Bader, President Obama’s former top adviser on Asia, had a straightforward Q&A in the Washington Post, and he predicted, at most, a brain drain as the youth of Hong Kong realize that Hong Kong’s soul is compromised. The CCP can be a brutal master, indifferent to the soft, idealistic notions of students and artists, and as hard as all the other empires that ever were.

Those who are too sensitive to live a lie may well head to Singapore, or the US, like Bruce Lee and an entire generation of martial artists and businessmen did before them. Maybe one day they’ll circle back to try and convince the fearful, oppressive old bastards that rule China that students, martial masters and unfettered artists are the soul of a nation, not cash and containers full of plastic.