Octopus Wrestling and the Cephalopod Uprising 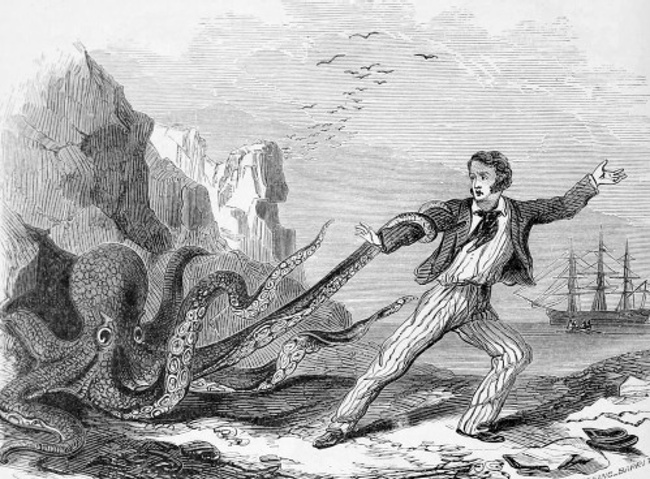 The cephalopods are coming.

Led by the octopus, with its crushing beak and eight tentacles—the most dangerous number of limbs, as any Muay Thai practitioner knows—these ocean-dwelling invertebrates, believed to be the most intelligent among creatures without a vertebral column, are on the verge of a full-fledged revolt against humanity. And our days of dominant force in both life and interspecies combat are numbered.

The signs are everywhere. Captive octopi across the globe have been demonstrating their Houdini-esque escape skills for quite some time now. They’re also learning how to use our technology. Their wild counterparts are doing their part by stealing said technology. They’ve been practicing their headlocks on humans and showing off their significant wrestling skills by taking on crabs, birds, and even cats in front of horrified and titillated onlookers wielding cameras, all as if to say “You’re next.”

A small but dedicated number of humans have stayed on top of this looming threat, posting the latest developments to the Concerned Redditors Against Cephalopods subreddit, writing articles for Gawker and Canada’s Weather Network, and crafting elaborate Christmas cards on the topic. But, much as it was for Cassandra from Greek mythology or Paul Giamatti in San Andreas, there is little their predictions can do to help us now.

Once upon a time, there was a class of man who could have saved us from the cephalopod rising: the octopus wrestler. Sadly, though, those men have been lost to time, common sense, and government regulation. 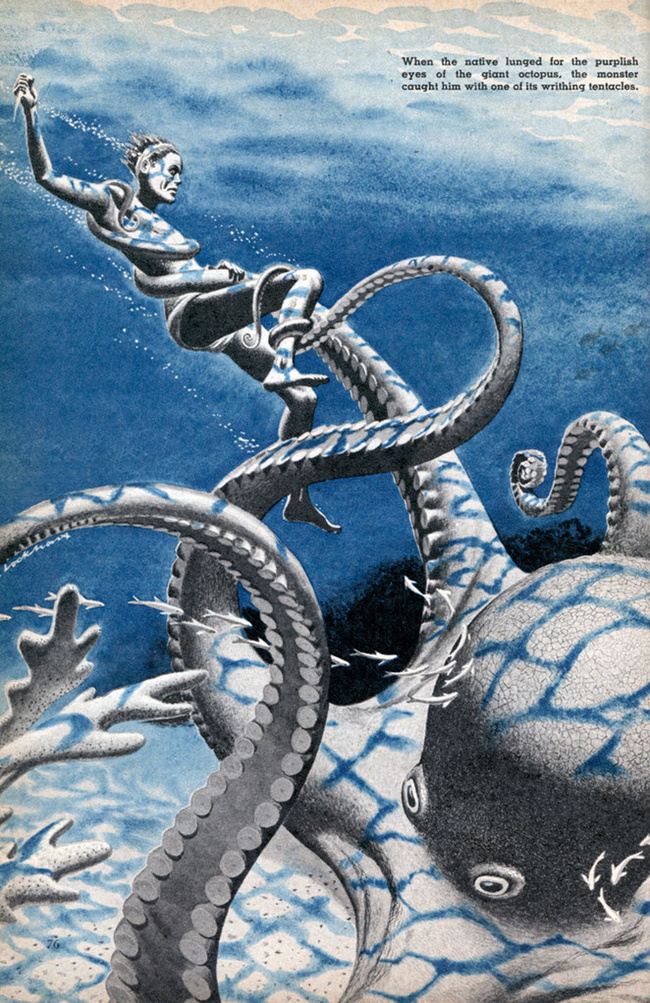 The concept of octopus wrestling first gained traction in the late 1940s thanks to a purple prose-laden essay in the April 1949 issue of Modern Mechanix called “Octopus Wrestling is My Hobby.” In what is generally considered to the be the first published account of the sport, writer Wilmon Menard recounts a trip to Tahiti in which he befriended a native hunter and followed him on his quest to vanquish the island’s giant octopi.

Outside of the title, there is very little in the way of wrestling in this article, which is astonishingly similar in tone to the Mr. Show skit The Roar of the Lion. There’s plenty of human vs. cephalopod violence, for sure, but it isn’t so much octopus grappling as it is just plain octopus stabbing.

“There would be a human-like moan and the water would be clouded with sepia. The long tentacles would flay the surface of the lagoon in savage fury, as the monster tried to rid itself of our spears which were firmly imbedded in its head,” Menard writes of one such encounter. “If necessary, another spear would be dispatched into the writhing hulk. It took a long time to tire the octopus and we had to hold firmly to the ropes attached to the end of the spears to prevent it from sinking to the bottom of the lagoon where it would be lost to us.”

Another encounter is even more graphic in nature.

“As it rose to the surface, pulling itself up the reef wall by its partly-severed tentacles, I could see that it was of a reddish hue, with a hideous horned head. Then it started rolling toward us. Although its sepia secretion clouded the water during the first stages of the conflict, I could see that its tentacles were really 25-feet long. Partly cut off by the natives’ knives, they flayed the surface of the lagoon, groping out for the attackers.

The octopus finally realized its hopeless situation and attempted to escape in its crippled condition. But the natives closed in with loud shouts of victory, hacking the tentacles from its body. I came in close, too, and one of the arms closed around the calf of my bare leg. Shivering at the touch, I slashed desperately with my knife, severing the tentacle. When I peeled the grisly fragment away, the skin came with it. For months I carried the red scar of the octopus’ kiss on my leg! A few final blows of the natives’ spears and knives ended the fife of the repulsive monster. I shall never forget in the last minute of conflict, the moan of fury that the octopus gave when the spears pierced his horned head.”

Menard concludes his story by defending the practice. “I realize it all sounds like a loathsome sport but it’s really more fun than hunting some poor harmless creature. When you wrestle and kill an octopus, you’re ridding the marine world of a treacherous enemy. And you’d better watch your step, too. For there’s no such thing as a reckless octopus hunter.” 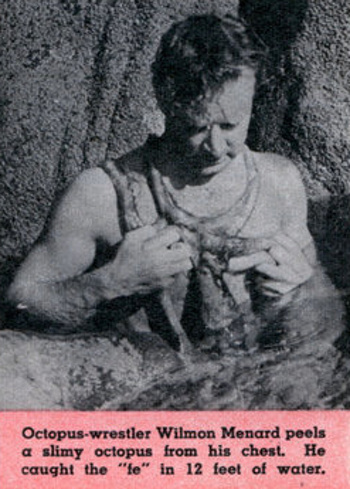 A little under a decade later, reports of far less bloody battles between man and cephalopod began to emerge from the U.S. west coast. An article published in the Nov 24, 1957 edition of the Toledo Blade recounts a world championship match that drew a crowd of 200 on a rainy day in Tacoma.

“It’s doubtful to ever replace hydroplane racing as the Northwest’s favorite outdoor sport, but octopus wrestling has developed an enthusiastic following in these parts,” the reporter speculates.

The story goes on to explain the rules of this less bloody—but not necessarily less dickish—take on the activity. “The participants are skin divers and the rules are simple: Competitors are divided into three-man teams. Three heats are held with one man from a team entered in each heat. When the wrestler’s turn comes, he dives into Puget Sound unarmed and tries to find an octopus to drag to the surface.”

It’s sort of like a more diving-oriented and slightly more glamorous answer to Hillbilly Handfishin. Or, as i09’s Keith Veronese put it in a 2012 article on the sport, it “sounds like a horribly rude form of aquatic home invasion.” 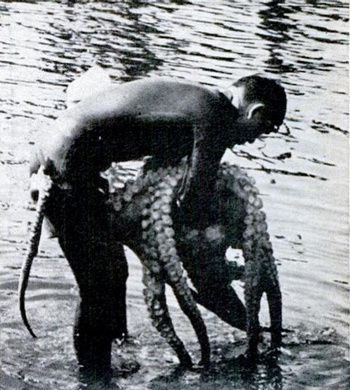 Successful competitors were awarded points based on the weight of their catches. Divers who chose to forgo aqua lungs in favor or a simple snorkel were awarded more points because of the increased degree of difficulty. The winning octopus that day, caught by a Portlander, weighed in at 80 pounds.

“Let it be noted that Giant Pacific Octopi (Octopus dofleini) are rather timid and not at all aggressive unless provoked, with most cases of provocation ending with the octopus fleeing,” Veronese points out in his article.

Despite the seemingly low stakes involved—and the fact that 99 per cent of the action happened underwater—continued to gain popularity. By 1963, the world championships, again held in Tacoma, drew 5,000 people and a television deal. The July 1963 issue of Skin Diving magazine called it “a whale of a success!” 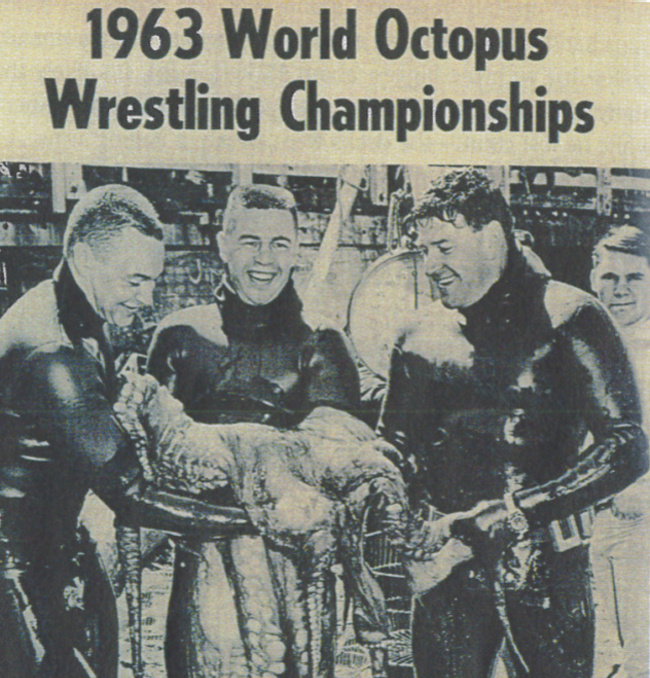 In a 2010 article about the event from The Seattle Times, organizer Gary Keffler was pragmatic about the level of skill involved.

“They have good suction, but if you get their arms, and pull, the suction cups go pop, pop, pop. They don’t have a lot of holding strength,” the diver and former stunt double for Lloyd Bridges said. “They always hear these awful stories about them, killers of the deep. The ones we have here are pretty laid back.”

In a 1964 story for True Magazine, though, journalist and humorist H. Allen Smith made the situation sound a little more dire. Writing about a man named O’Rourke who used himself as live bait while he fished for octopi in the ‘40s, Smith dropped this gem: “All this while O'Rourke was becoming perhaps the world's greatest authority on the thought processes and the personality of the octopus. He knew how to outmaneuver them, to outflank them, and to outthink them. He knew full well, many years ago, what today's octopus wrestlers are just beginning to learn—that it is impossible for a man with two arms to apply a full nelson on an octopus; he knew full well the futility of trying for a crotch hold on an opponent with eight crotches.”

By the mid-’60s, the original organizers and fans of the octopus wrestling world championships began to lose interest in their sport and moved on to other things. In 1976, Washington state hammered the final nail into the eight-limbed grappling coffin with a law that made it illegal to “molest” or “harass” an octopus. Now human on cephalopod action only exists in the fictional realm, thanks to masterpieces like The Calamari Wrestler.

The cephalopods have not forgotten these events and they’ve been preparing for their revenge ever since, waiting patiently until the last of the octopus wrestler ages out of competition years, waiting for the rest of the human race to forget their hard-earned skills, waiting until we are completely and utterly defenseless. Unless the seals step in at the last minute, in an act of benevolence that we probably don’t deserve, we are done for. And we brought this on ourselves.

The kangaroos and the bears will laugh at our octopus-like moans. The sharks might join in.

The Twisted and Terrible History of Men Fighting Bears